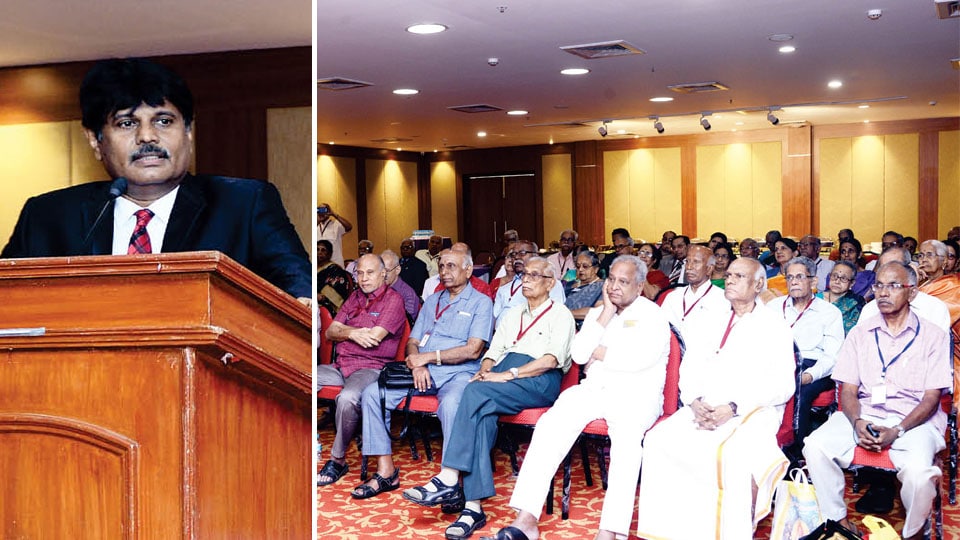 Mysuru:  “The days are not far off when doctors will become completely redundant as technology starts taking over the medical profession,” said Mysore Medical College and Research Institute (MMC&RI) Dean-cum-Director Dr. C.P. Nanjaraj.

He was speaking after inaugurating the 14th Kilpauk Medical College (KMC) Alumni Association Meet at Hotel Southern Star, here on Feb.19 and said that the times have changed from the time the octogenarian doctors began their practice in the late 1950s and 1960s when just by feeling the pulse the doctor would say that the daughter was pregnant and the whole family would rejoice.

That was the time when Doctors were called Gods but now they are pithily referred to as just Doc. In the next two decades medicine became evidence-based as technology and lab service were given more importance. Now, the time has come when 90 per cent is totally technology-driven. Added to this, Artificial Intelligence (AI) has crept into the curriculum and professions like skin, pathology and radiology is where robotics is taking over and added to this nanotechnology is another field that is invading the field of medicine, said Dr. Nanjaraj, himself a Radiologist. “Even though stethoscope itself has become obsolete as by just downloading an app gives more information than a textbook. Thus in future there will be only 10 per cent of doctors and 90 per cent technology,” he said.

KMC Alumni Association Organising Secretary Dr. P. Mohan Rao, sharing a few anecdotes of his long career recalled how easy it was to get into the Southern Railways in 1964 when all he had to do was go and meet the officer concerned who asked him to report for duty immediately.

Earlier, speaking to Star of Mysore, Dr. Rao who is a Rajyotsava awardee this year for his rural health service, said that it was the first time that KMC Alumni Association was hosting the Alumni Meet in city as they found Mysuru beautiful, calm, quiet and peaceful, where nearly 42 octogenarian doctors had gathered for the reunion.

Highlighting about M.V.J. Medical College and Research Hospital, located in Hoskote, Bengaluru, of which he is the Executive Director, he said that in his hospital there were no special wards as they catered only to the poor.

In the last 18 years they have treated nearly 3.5 lakh patients belonging to about 400 to 450 villages in and around Hoskote free of cost. They would also provide free food that included breakfast, lunch and dinner, he said and added that all tests were free except for MRI and CT scan for which they charged just 25 to 30 per cent of the cost, he said.

President of the Association Dr. K.S. Alva said that when they were all studying it was before the State reorganisation and hence the students were all from the four Southern States of Tamil Nadu, Kerala, Andhra Pradesh and Karnataka as all of them came under Madras Presidency.

Association Secretary Dr. P.V. Jagadeesan said that the first meet was organised in 1998 in Chennai and it has also been held in Tirupati, Vijayawada and Pollachi. However, the meet moved to Karnataka only last year when it was held in Udupi and this year in Mysuru.

There are surgeons, general physicians, physicians including a doctor from New York Dr. Venkatraman, who is a laproscopic surgeon, who are attending the Alumni Meet that ends today.