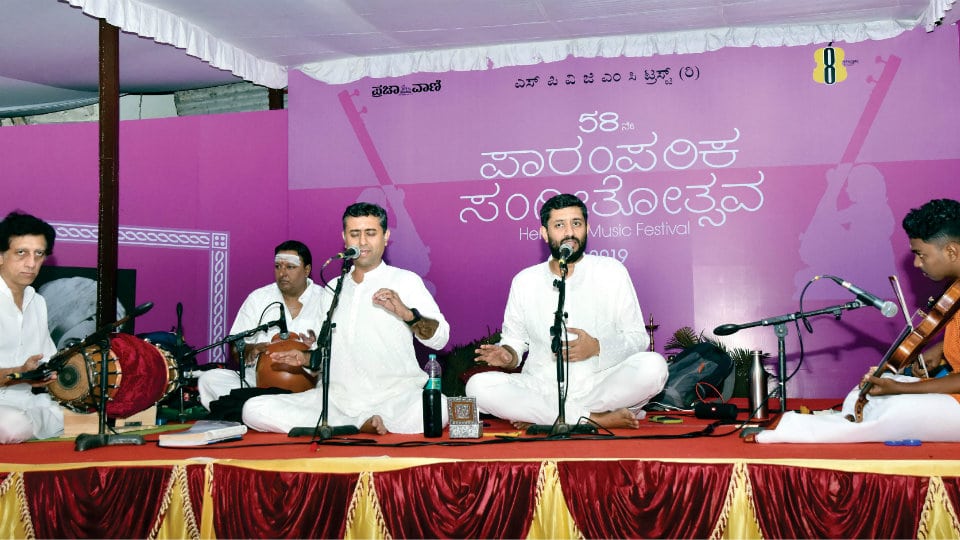 The Music Festival at 8th Cross, V.V. Mohalla, began with all grandeur on the 2nd of this month with Harish Pandav’s auspicious saxophone concert. An extremely talented and versatile young artiste, Harish has performed for various Sabhas all over the country.

Harish started the concert with the Suruti varna ‘Ento Prema’ by Veena Kuupaiyer and bowing to Vinayaka with Mysore Vasudevachar’s ‘Pranamamyaham Sri Gauri Sutam’ in Gowla for which he developed brief swaras, he chose to play Bilahari, the raga of which was elaborated leading onto ‘Paridanamicchite Palinchu’ by Patnam subramanya Iyer.

Hamsanada was also treated with a short ragalapane and a neraval at ‘Raamanaamamane’ for the kriti ‘Bantureeti kolu’ by Tyagaraja. Harish also played an RTP in Shanmukhapriya, the lyrics of which were ‘Nayaka Vinayaka Gana Vinayaka Sakala Siddhidayaka’ set to Khanda Triputa tala. The other inclusions in the concert were ‘Pahi Pahi Gajanana’ in Sindhu Bhairavi (Ganapati Sachchidananda Swamiji), the popular ‘Jagadoddharana’ devaranama of Raja Iyengar fame, ‘Yena Bedali Nanu’ devaranama in Revati and the concluding ‘Bhagyada Lakshmi Baramma.’

Harish was ably supported by Achyuta Rao on violin, A. Radhesh on mridanga and S. Manjunath on ghata. That the entire team (except the violinist) is from Mysuru is appreciative.

On the second day of the concert series, Trichur Brothers — Krishna Mohan and Ramkumar Mohan — gave a vocal concert. The concert attracted a huge number of audience from all over Mysuru. It goes without saying that the brothers are trained in the laya aspect from their father Trichur R. Mohan who invariably accompanies them on all concerts.

The brothers have a melodious voice and a very impressive style of presentation which have a magical appeal on the listeners. The concert commenced with the Adi Tala Varna in Saraswati Raga on Lord Ganapati. The second composition was a rare and lively one — ‘Namami Vighna Vinayaka’ in Hamsadhwani by Krishna Swamy Ayya. The Kriti has enchanting sangatis and the brothers rendered the composition in the way it was meant to be rendered by the composer.

‘Rave Himagiri Kumari’ Shyama Shastri’s swarajati has a desperate appeal to Goddess Kamakshi as in many other compositions of Shyama Shastri. Here the composer implores to the Goddess — ‘I have always placed my implicit faith in you. Please protect me and dispel my agony and fears. I have no place to go but to surrender at your feet.’ The brothers sang this with appeal and did justice to the composition.

‘Innu Daya Barade Dasana Mele’ in Kalyana Vasanta by Purandara Dasaru was good except for the fact that there were many mistakes in the lyrics, which is excusable as they are not familiar with the language. ‘Taye  Tripura Sundari’ in Shuddha Saveri, a Tamil composition was well-sung with also a neraval and kalpana swaras at the charana — ‘Kamadhenu Valandu Karuna Roopini.’ After the filler ‘Mokshamu Galada’ in Saramati by Tygaraja, which started with the Anupallavi ‘Sakshatkara nee,’ the brothers proceeded to the main attraction of the evening — The RTP.

Rarely, Gamanashrama was chosen for the pallavi rendition. The brothers practice a special brand of ragalapana with both the partners exchanging phrases in an equally distributed exploration of the ragas they take up. The ragalapana and the tana were developed elaborately in a splendid manner. The tana was excellently sung enhancing the richness with ragamalika in Hamsanada, Sindhu Bhairavi, Vasanta and Revati. The pallavi was short set to Mishra Chapu Tala. While rendering the trikalas, the elder of the brothers faltered as also in the swara kalpanas earlier in the concert.

Kalpana swaras  for the pallavi in ragamalika in the ragas Begade, Saranga, Kapi, Kuntalavarali, Behag and Charukeshi were colourful. ‘Nanati Baduku Natakamu’ of Subbulakshmi fame was preceded by a shloka ‘Samprapte Sannihite Kale’ from the well-known ‘Bhaja Govindam’ of Adi Shankaracharya. On a request, the artistes also sang a bhajan in Yamankalyani.

Young Gokul is a gifted violinist. His following of the vocalists and reproducing the swaras and pallavi was praise-worthy. Trichur Mohan and Kovai Suresh added grace to the concert.