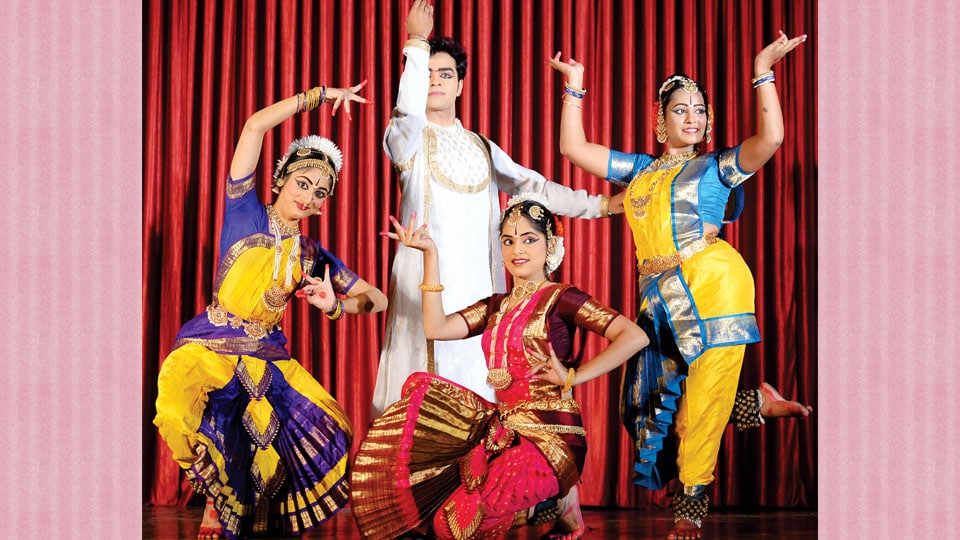 The Articulate festival’s series 43 saw an alliance of Bharatiya Vidya Bhavan, The Artistes and Articulate Trust for Arts with a mission to support classical dance arts and showcase the artistes’ artistry. Mysore B. Nagaraj, Managing Trustee of Articulate Trust for Arts, curates the show. The line-up was one Kathak and three Bharathanatyam artistes sharing their concerts to a packed Prof. Y. T. Thathachari Auditorium in Vijayanagar, on the 3rd of November 2019.

Karthik B. Shetty, Bengaluru, disciple of Guru Mysore B Nagaraj, performed Kathak through three compositions dominated by Nrutta aspect of the dance form. He began with a Shiva Stuti followed by series nrutta composition emoting the joy that Shiva in his Ananda Tandava. After this Hindu repertoire, Karthik presented a Triwat in Raga Madhuvanti and a Tarana in Raga Darbari reflecting the Islamic touch to art. All three compositions were set in Teen Taal.

Karthik very well executed the identity of Kathak in the skilful renditions of his Chakkars and Tathkars apart from unleashing high energy in fast tempo, the chosen Tukdas – Parans and suddenly freeze to a still posture, showcasing his skill in rendering the North Indian Dance form. The virile vibrancy shown in the first item on Shiva was a total contrast to the sublime and leisurely presentation of the Tarana and that was justice done to the different Gharanas where the art flourished in the Hindu and Muslim Courts.

Sneha’s choice was a good combination that revealed her acumen both in Nrutta-Nrutya and Abhinaya. The ease with which she sailed during her performance is truly appreciable. Her performance was one of those where a rasika could “sit back-relax-eee-enjoy” without throwing challenges to the audience to their dance knowledge and sensibility.

Aparna’s pushpanjali displayed her crispness and the geometry she maintained in the Nrutta parts of the composition very pleasingly. The two abhinaya based rendition also showcased her emotive ability in tune with the sahithya.

Suraksha’s four numbers revealed her inexhaustible energy, passion to dance and the hard work she has put in her training and imbibing the dance form. Encapsulating the life and important times of Sri Krishna’s avatar, the description of Radha’s state of emotion as told to Krishna by the sakhi, the joy of being in love with Chennakeshava as seen through the eyes of a poet in his search of the Sculptures soul was displayed with flair after her bhakthi number to Lord Ganesha who is also a patron deity for Dance.

The evening sailed through in preplanned sequence executed smoothly, narrated interestingly and  the packed audience left the charged space with feeling of awe and aggrandised.