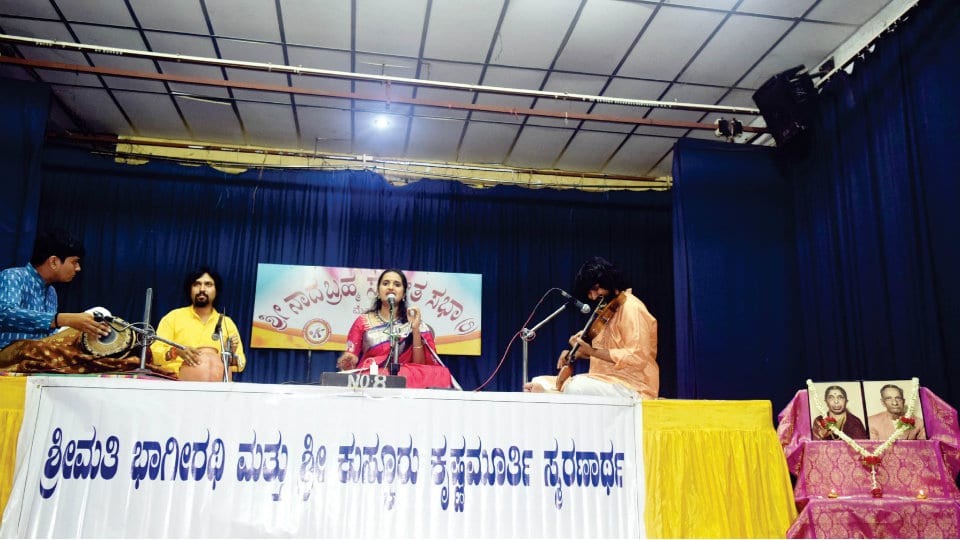 Sangeeta Dileep sang for Nadabrahma Sangeeta Sabha on the 19th of October. She was accompanied by her husband Dileep on the violin, Sachin Prakash on the mridanga and Sharat Kaushik on the ghata.

Sangeeta has a good reputation as a musician.  Her training under Chitraveena Ravikiran has moulded her into a good vocalist and her violin  performances with Dileep have enriched her music.

Starting the concert with the ‘Sarasuda’ varna in Saveri, Sangeeta presented ‘Gam GaNapate’ by Harikeshanellur Muttiah Bhagavatar in Hamsadhwani. Niroshta is a raga without the swaras ‘p’ and ‘m’ (and hence called niroshta- meaning without the lips). Muttiah Bhagavatar is credited with creating the scale of this raga. His melodious composition ‘Raja Raja Radhite’ suited both for singing and for instruments was sung by Sangeeta with clarity.

Hamsanada was chosen as the sub-main item for the evening. Tyagaraja’s ‘Bantu reeti kolu’ was decorated with a neraval and swaras at ‘Raama naama mane vara’ Deekshitar’s ‘Saraswati vidhi yuvati’ in Hindola and ‘Nee kela dayaa’ in Sarasangi by Ramaswami shivan were lively fillers. ‘Vandanamu Raghunandana’ in Shahana came as a surprise in the mid of the concert.

The RTP in Shanmukhapriya was a neat presentation. Dileep added enough resources to the expansive presentation of Shanmukhapriya with his experience and elegant responses on the violin. The pallavi was set to Khanda Triputa tala the lyrics of which were ‘Matangi Sri Raja Rajeshwari’, which is also the pallavi part of Muttuswami Deekshitar’s composition in Ramapriya.  Intelligent swaras were l woven to various parts of the pallavi with also ragamalika swaras in  Mohana and Kharaharapriya.

The not-much-heard mridangist Sachin Prakash and Sharat Kaushik were boisterous from the start to the end.