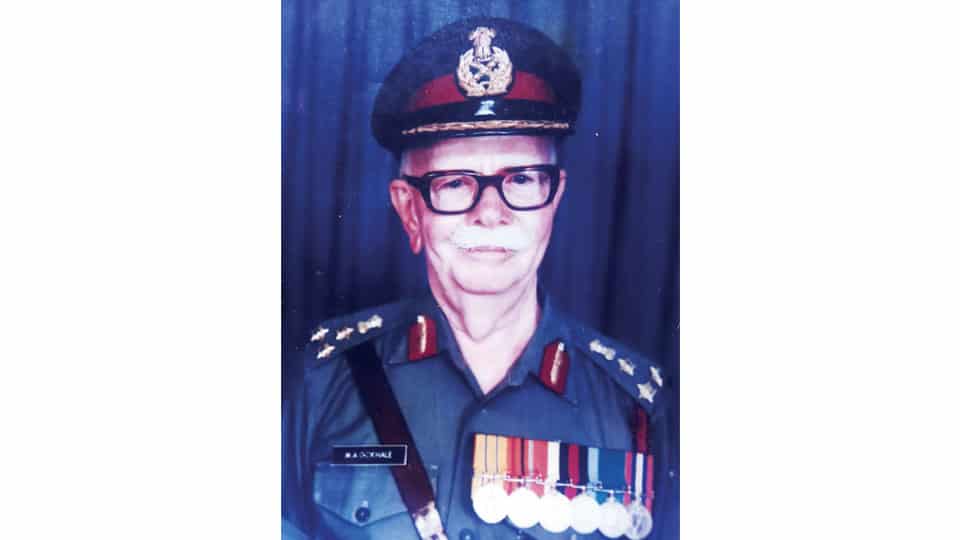 Late Brig. Dr. M.A. Gokhale’s journey as a doctor in the Army to a teacher in Mysuru School

Brigadier Dr. M.A. Gokhale, who was born in Karkala, Mangaluru, served the Indian Army as a doctor and was awarded with Ati Vishisht Seva Medal (AVSM)  for his untiring services to the wounded soldiers during Bangladesh War in 1971. He continued his services to the needy even after retirement at many places including Mysuru. He was in Mysuru for almost 25 years and has served poor patients in and around Gokulam area free of cost as well as taught in Lions Sevaniketan School. He treated poor people freely and gave them fruits too as they could not afford to buy them in the market. The life story and the messages of late Brig. Dr. Gokhale is indeed inspiring. When the nation is celebrating Azadi Ka Amrit Mahotsav, let us salute this great soldier-doctor for his selfless service though he is not in our midst today.

Brig. Dr. Mahadev A. Gokhale was born on 22nd September, 1917 in a small town by name ‘Karkala’ in South Canara, near Mangalore, Karnataka. Karkala is a very small village and a century ago it was not well developed, as such lacking educational as well as other developments.

Mahadev, as a child, was very bright and intelligent. He shined academically and seeing his progress, the elders of the village were sure of this boy’s bright future. They were very much sure that he would bring name and fame not only to the family, but also to his birthplace (Karkala). The experienced elders’ predictions proved true when Mahadev completed matriculation from Karkala High School with distinction. There were no colleges to study further and there was no money with his parents either to educate him outside Karkala. But one philanthropist named Nana Dandekar came forward and sponsored his education. Thus Mahadev had the opportunity to prove himself academically. He went to Madras to study further and completed B.Sc. which was followed by M.B.B.S. from Christian Medical College, Madras.

Now Mahadev became Dr. Mahadev Gokhale, a pride of Gokhale family and Karkala village as he was the first to become a doctor. There were abundant opportunities for him to do private practice and earn money. But Dr. Mahadev Gokhale had inner urge to serve Indian Army and thus was Commissioned in Indian Army in 1944. His expertise as well as dedication and compassion towards the wounded soldiers of Army were beyond comparison.

In the year 1945 he got married to Leela Khare (Shakuntala Gokhale), who was a Hindustani classical singer. Thus Dr. Gokhale instantly decided to learn tabla. He not only encouraged his wife to pursue her music but also supported  her by accompanying on tabla wherever he was getting family postings. Shakuntala Gokhale was performing at All India Radio. She was the first disciple of Ghazal Queen Begum Akhtar.

While serving in various units he completed his M.A. in Psychology. He also excelled while learning foreign language and did graduation in German language. Dr. Gokhale’s service during Indo-Pak War in the Eastern Sector-Bangladesh  in the year 1971 was excellent. Thus, in recognition of his exceptional medical services he was awarded Ati Vishisht Seva Medal by the President of India.

In the year 1972, he was posted as Commandant at Command Hospital, Pune, one of the biggest hospitals having 1,000 beds in India (Southern Command). At the same time he was associated with Red Cross Blood Donation Camps and many co-related activities for which he received an Award from Red Cross for maximum blood collection and excellent medical services rendered.

Even after retirement, in Mysuru he was associated with JSS College and was instrumental in organising blood donation camps at different places across Mysuru.

From Pune, Dr. Gokhale was promoted to the rank of Brigadier and was posted as ADMS M&G Area, Mumbai. This was his last posting as he retired in the year 1974 from Mumbai. However, even after retirement he was in great demand and as such he was appointed as Chief Medical Officer of Hindustan Copper Complex (HCC) at Mosaboni (near Tatanagar). During his tenure here he upgraded normal medical emergency services in the copper mines. Until 1977 he worked there and after that he settled down in Mysuru and stayed in Gokulam at his nephew Chiplunkar’s house which Dr. Gokhale named as ‘Dhanvantri.’

True to the name Brig. Dr. Gokhale was like God Dhanvantri for his patients. Brig. Gokhale always had the inner urge to earn more knowledge than money. Thus when he was 80 years young, he completed his M.A. in English. He received the degree with standing ovation and claps from the entire audience as a mark of respect and appreciation.

He never stopped at this point and completed B.Ed. successfully — the intention behind doing B.Ed. was to be eligible to be a teacher. He worked in Lions West Sevaniketan School, Gokulam, without accepting any monetary benefits. An exemplary service indeed !  He was associated with many cultural associations in Mysuru and contributed his mite — he participated in Dr. Sinduvalli Ananthamurthy’s Kalasuruchi activities when the play ‘Ghashiram Kotwal’ was staged successfully.

He was also associated with CFTRI cultural association and participated in annual gatherings by playing tabla, accompanying Shakuntala Gokhale as well as other singers willingly. His fluency in Kannada and Marathi as well as the knowledge of Music, Tabla, was excellent which was reflected in his poetic translations perfectly of Marathi Naatya Sangeet which is known as Rangageethe in Kannada.

When he expired at the age of  87 in the year 2005 his body was donated to Armed Forces Medical College (AFMC), Pune, as his last contribution to the medical field and as per his last wish as well.

He was proud of his son-in-law Maj. Kharshikar, who expired on duty. His eldest son Col.  Chandrashekar  completed his dedicated service in the Army following the footsteps of his father and retired. Thus Brig. Dr. M.A. Gokhale led a very contented life and set examples in many fields. He will remain in the minds of people forever as an inspiring person. Our repeated salutes to such great souls who have shown a bright path to us.