Bahuroopi Theatre extravaganza is back !

This is the time for theatre buffs to rejoice and enjoy watching some of the best plays to be staged by various theatre groups across the country. Yes, the 17th edition of Bahuroopi National Theatre Festival is here again to entertain.

Mysuru-based theatre repertory Rangayana will host the mega theatre festival from Jan. 14 to Jan. 21 at its premises. Having started as ‘AKKA’ festival in 2001 when noted play director Prasanna held the reins at Rangayana, it was renamed as ‘Bahuroopi’ with an aim to give different dimensions into the festival and involve people from different walks of life. 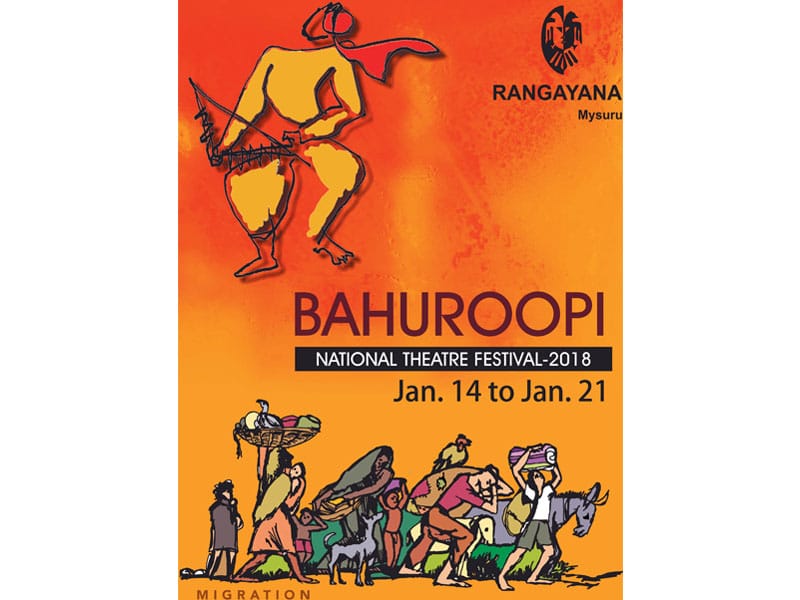 The festival was not organised during 2002 for various reasons. But, from the year 2003 it is being organised regularly with different themes. Rangayana has organised 16 editions of the National Theatre Festival with different themes focusing on Women Issues, Agriculture, Folk Culture, Tribal Culture, Desi Culture, Rabindranath Tagore, Jnanpith Awardees from Karnataka, Shakespeare, Sufi Culture, Water, Abhiyakthi and much more. Last year, the festival was organised as a multi-lingual international theatre festival inviting theatre groups from Sri Lanka, England, Bangladesh and Poland to perform on stage.

This year, the Bahuroopi theatre festival is being organised with theme ‘Migration’ to highlight and discuss the effects of migration. The theatre fest will be inaugurated by renowned actor and Jnanpith awardee Girish Karnad at Vanaranga on Jan. 14 at 5.30 pm.  District in-Charge Minister Dr. H.C. Mahadevappa will release the souvenir. Minister for Kannada and Culture Umashree will inaugurate the handicraft and book exhibition. MP Pratap Simha, Mayor M.J. Ravikumar, National School of Drama former Director Dr. Anuradha Kapoor will be the chief guests. MLA Vasu will preside over the event. Kannada and Culture Director N.R. Vishukumar, DC D. Randeep and Rangayana Joint Director V.N. Mallikarjunaswamy will be present. 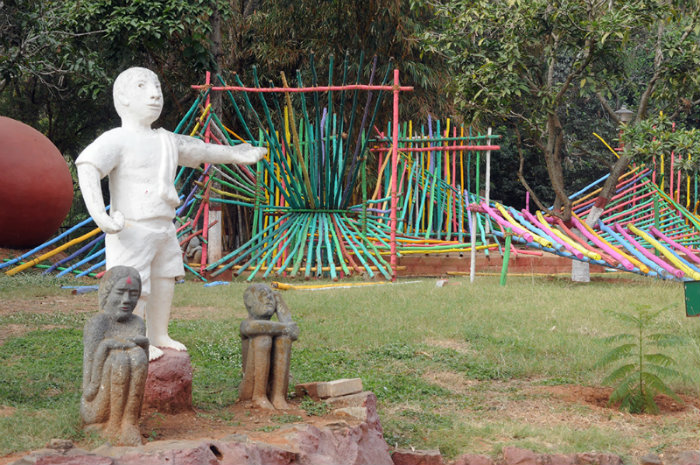 This year the Bahuroopi Theatre Festival will feature a total of 18 plays including 9 Kannada plays and 6 one man shows. The plays will be staged at five different venues — Bhoomigeetha and Vanaranga in Rangayana premises, Kalamandira and Mini Theatre (Kalamandira Premises). Kindarijogi premises will be utilised to showcase folk events.

Bahuroopi has been an event where theatre buffs get to watch some of the best plays and participate in the seminars organised to discuss on the topics related to the themes.  Since, Rangayana is a theatre repertory it has been designed in a manner similar to that of Bharathiya Ranga Mahotsav organised by National School of Drama in New Delhi every year. Though, the theatre occupies centre stage in such festivals, but in Bahuroopi, it is not only about the plays, but it is the seminars and book exhibitions that attract a lot of people to its fold.

The two-day National Seminar will be held at Rangayana on Jan. 20 and 21. The seminar will be inaugurated by noted Marathi Playwright Mahesh Elkunchwar on Jan. 20 at 10.30 am. Rangayana Director Bhagirathi Bai Kadam will deliver the introductory speech. Senior Journalist and Writer P. Sainath of Mumbai will preside over.  Writer Nanditha Haskar from Goa and State SC/ST, Nomadic, Semi Nomadic, Microscopic Tribes Development Cell Nodal Officer, Bengaluru Nodal Officer Bola Gurumurthy will be the chief guests.  The event will be presided by Writer Sainath of Mumbai.

The two-day event will feature deliberations on topics such as ‘Migration-Politics and Human Rights’, ‘Sociological and Cultural Forms of Migration’ and ‘Migration: Agriculture, Environment and Technology’.

The festival is also an opportunity for the foodies to tickle their taste buds with some of the traditional food belonging to North Karnataka and other parts of the State and Country. When the festival was organised for the first time, people got introduced to some of the best cuisines of North Eastern States, but these days it is the cuisines that belong mainly to Karnataka. The ‘Jolada Rotti’ and ‘Yengai’ is one of the cuisines from North Karnataka which attracts lot of gastronomes.

Rangayana will also provide an opportunity for students of select colleges to exhibit their folk talent through ‘Yuva Spandana.’  The Bahuroopi Film Festival will feature screening of movies and documentaries in 24 languages. The film festival will be inaugurated by actor Vijayalakshmi Singh on Jan. 14 at 10.30 am at the function to be held at Sriranga auditorium. Another renowned actor Jai Jagadish will be the chief guest. 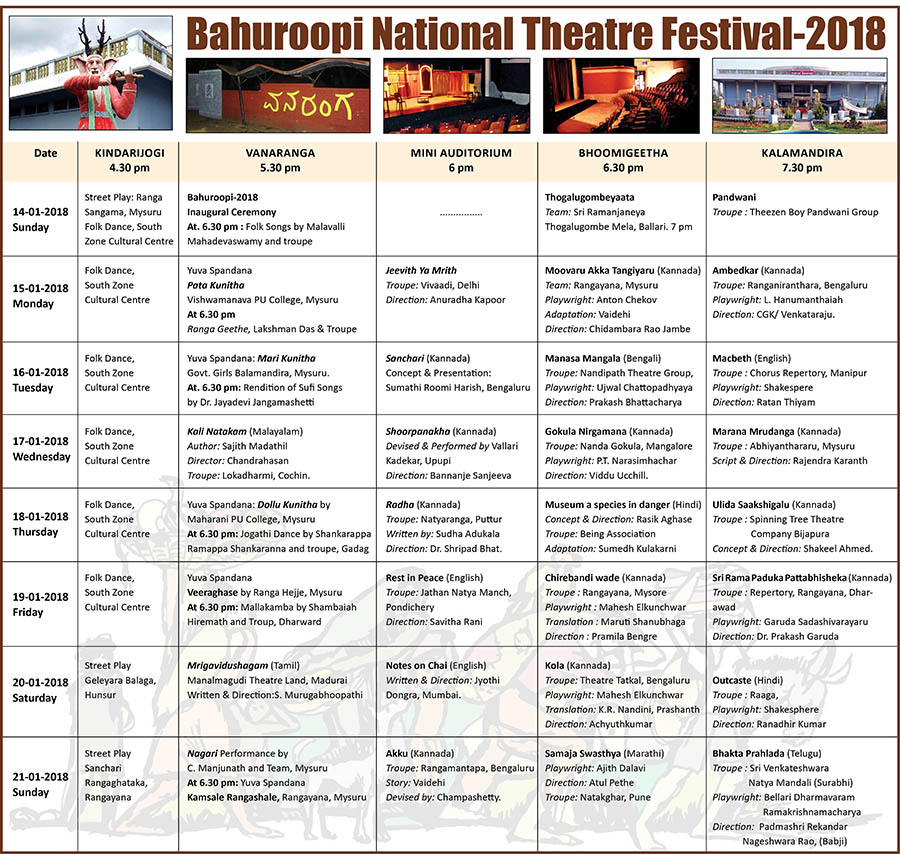 Bahuroopi is also an opportunity for the amateur groups in Mysuru to get involved in organising the festival. Students from various visual art colleges also work with design department to create the sets required for plays and also the works which decorate the Rangayana premises during the week-long festival. It is also an opportunity for college students who are interested in theatre activities to get introduced to theatre artistes who come from different parts of the country. Rangayana has been involving college students by conducting theatre camps and organising festivals especially for them. Bahuroopi is a festival which brings the college students to Rangayana who work as volunteers and lend their helping hands for organising the festival successfully. 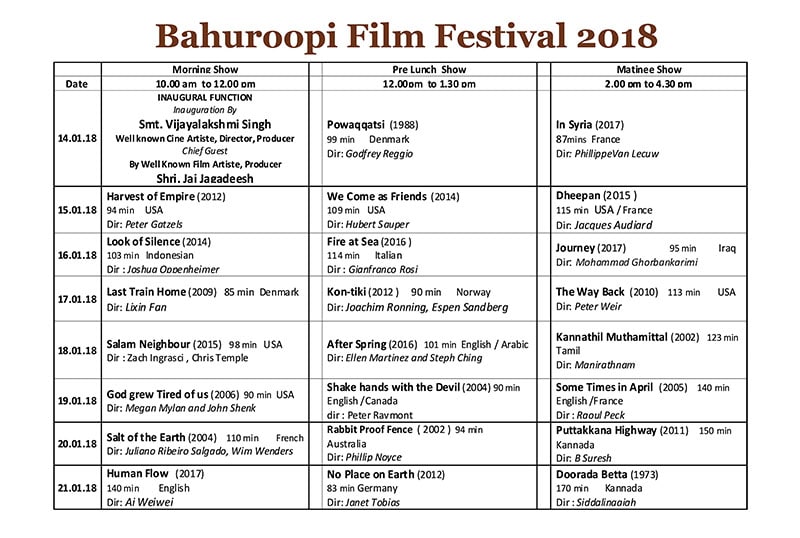 The folk festival which is also a part of the Bahuroopi festival will feature different folk arts which will portray the rich tradition and culture existing in our State. All folk performances will be done by students of few select colleges. With an intention of taking Bahuroopi to people, various folk dances such Pata Kunitha, Mari Kunitha, Kamsale, Togalu Gombe Aata and special folk performances from artistes of South Zone Cultural Centre has been organised throughout the festival at Kindarijogi premises everyday at 4pm.

This apart, the Bahuroopi Film Festival, which has become a great hit among cine goers, will feature 15 movies that will be screened at Sriranga auditorium from Jan.14 to Jan. 21. The festival will feature some of the best independent movies and also yesteryear’s Kannada movies such as ‘Doorada Betta’ starring matinee idol Dr. Rajkumar and Bharathi. 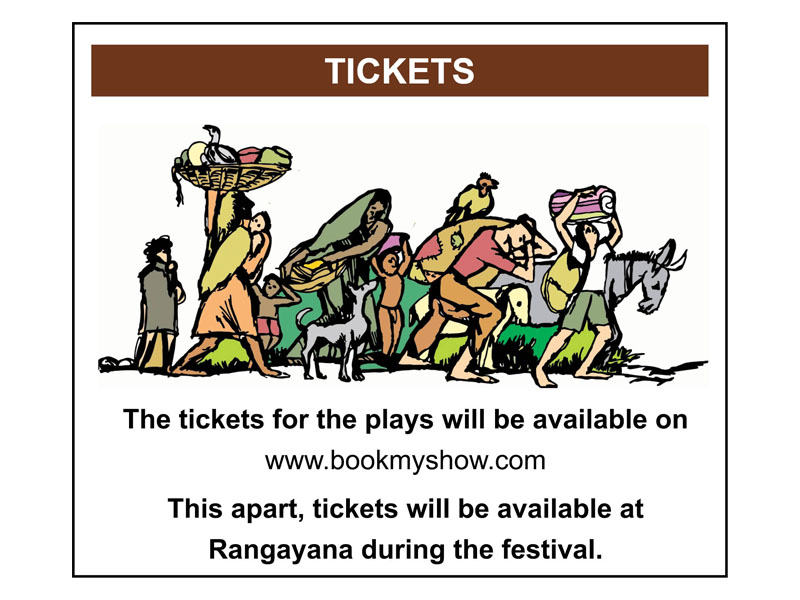