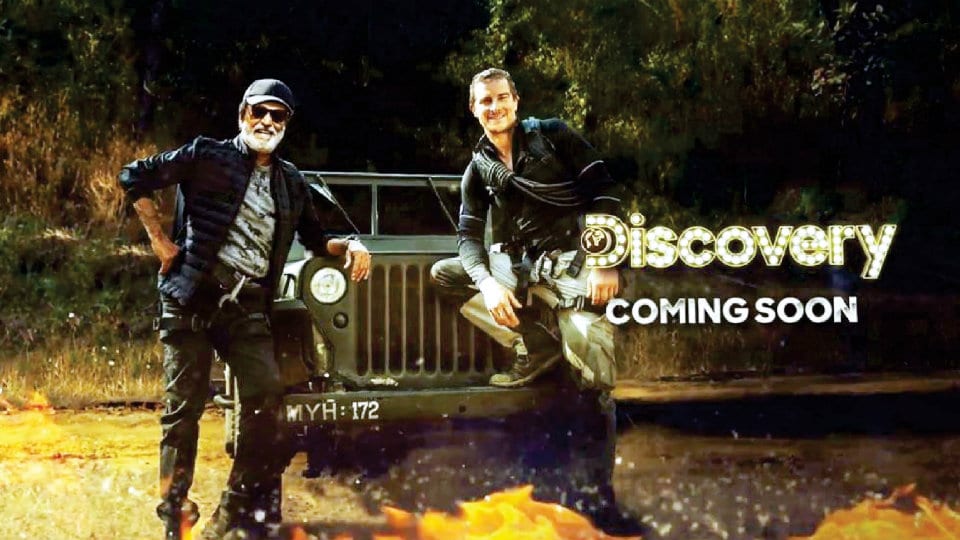 Sharing a motion poster which features Rajini and Bear dressed in their wildlife gear, Grylls wrote, “Preparing for @Rajinikanth’s blockbuster TV debut with an ‘Into The Wild with Bear Grylls’ motion poster! I have worked with many stars around the world but this one for me was special. Love India. ThalaivaOnDiscovery.”

Rajinikanth is debuting on the small screen with Bear Grylls after 43 years in cinema. 69-year-old Rajinikanth and Grylls are shown in a close-up with an adventure theme of fire and flying debris in the background.

The series crew shot at places including Moolehole River, Tiger Road, Chamanahalli village, near an old Iron Bridge in the fringes of Kalkare and Moolehole Forest range along Karnataka-Kerala border. Calling the Superstar a ‘Swagger’, Grylls also tweeted saying ‘In the wild everything is different… It was so fun to spend time with the legend and get to know and see him in a totally new way.’

The Bandipur Tiger Reserve was formed by integrating forest areas of erstwhile Venugopala Wildlife Park, which was established in 1941 and was later enlarged to its current size in the Chamarajanagar district, about 220-km South West of Bengaluru. The Tiger Reserve lists 28 species of mammals, including Royal Bengal Tiger, Asian elephant, leopard, bonnet macaque, Indian Pipistrel and barking deer. Besides, there is an impressive population of reptiles and insects.

In spite of Bandipur having the highest tiger population in the country, no tigers were spotted during the celebrities’ shoot although many a sloth bears and elephants frequented the areas where the documentary shooting was held.

In August 2019, Grylls had hosted Prime Minister Narendra Modi in the show, which was shot at the Jim Corbett National Park in Uttarakhand in February last year.

In Man Vs Wild, former British serviceman Grylls showcased survival strategies in extreme challenging conditions in the most remote locations around the world.