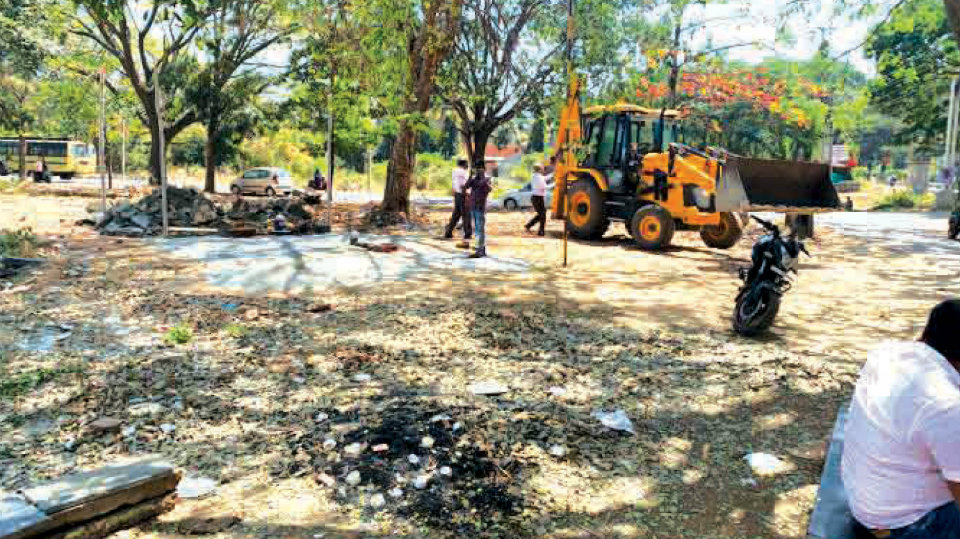 Mysore/Mysuru: The sudden anti-encroachment drive, by the officials of Mysuru Urban Development Authority (MUDA) at a vacant site near the arch at Kempu Cheluvajammanni Nagar (K.C. Nagar) yesterday, has irked religious leaders.

The religious leaders alleged that there is a Shivalinga at the vacant site and as Shivaratri is being celebrated on Friday, stones were arranged to conduct religious rituals, but MUDA officials, who arrived at the spot yesterday, have cleared the stones.

Pointing out that the said place has historical significance, they said that it would be wrong if any damages are caused to the historical clues in the name on anti-encroachment drives.

Mysuru Rakshana Vedike President M.K. Premkumar, speaking to SOM said that the issue pertaining to the ownership of the land is in the Court and added that Victory Stones (Veeragallu) of 11th and 12th centuries were at the place to which puja is performed on Ayudha Pooja day, which is being continued even today, by the neighbouring villagers.

Continuing, Premkumar said that Victory Stones were installed in memory of the ancestors (Hunter community), who used to fight wars on behalf of the Kings and attained martyrdom and alleged that a few vested interests were planning to construct a temple illegally at the place.

Stating that the vacant site has been marked as a religious place while creating MUDA City Project, Premkumar further added that the site was allotted to a Christian organisation in 2007 and they had approached the District Court in this regard following which officials from the Department of Archaeology, Museum and Heritage conducted  survey and studies.

Premkumar further said that the Court gave a verdict in their favour and the Christian organisation approached the High Court for an alternate site. He said that he would lodge a complaint against those planning to construct a temple at this historical place and also against MUDA if any historical clues were damaged during the anti-encroachment drive.

Meanwhile, MUDA Zone-6 Zonal Officer Ravishankar, told SOM that the vacant site is mentioned as a Civic Amenity (CA) site in MUDA records which has been allotted to a Christian organisation.

He further said that a Shivalinga has been installed in the vacant site. Following information that a mantap was being constructed behind the Shivalinga and it would be a problem in future if the construction continues,  Ravishankar said that the anti-encroachment drive was hence conducted in the initial stage itself.

The Officer said that no harm or damage was caused to the Shivalinga and added that they (MUDA officials) did not know about the case pertaining to the said vacant site at the Court.