Home » News » Behind the scenes with Dasara elephant doctor 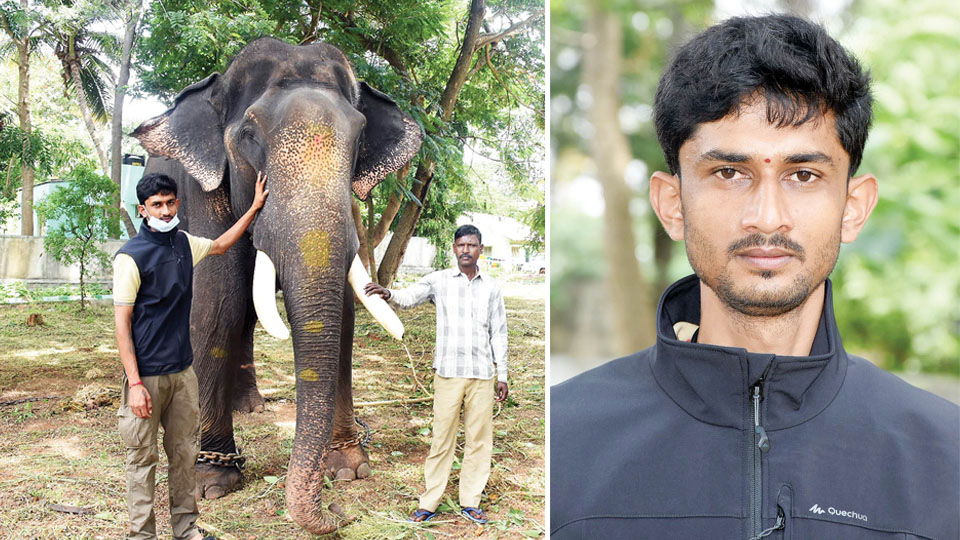 Behind the scenes with Dasara elephant doctor

Veterinarian Dr. Ramesh runs the show with jumbos for the first time

Mysore/Mysuru: After the elephant handlers during Dasara, the next important role is played by the elephant doctor, designated by the Forest Department to take care of the jumbos during their more-than-a-month stay inside the Mysore Palace. Anything amiss in their health, the doctor has to shoulder the blame.

Fortunately, nothing untoward happened during this year’s Dasara except for minor aberrations like Vikrama’s musth condition and the people-and-vehicle-terrified Lakshmi, the first timer. Both were pulled out from the ‘Vijayadashami’ procession.

This year, the credit of ensuring the smooth conduct of the festival and ensuring a good elephant health has to go to Dr. H. Ramesh, who has achieved the feat for the first time. In fact, when Ramesh was appointed as the vet for Dasara elephants days before Dasara, no one had heard his name and there were apprehensions about how he would manage the elephants following the legacy of well-known doctors like Dr. Chittiappa and Dr. D.N. Nagaraj who have put in years of service in caring for Dasara elephants.

But setting aside all the apprehensions and working focused, Dr. Ramesh has proved his mettle and has successfully conducted the festival earning brownie points. He, however, credits the achievement to seniors, Department Staff and the elephant handlers without whose support this would not have been possible.

He joined the Veterinary Department just three years ago and within a short time, he got a chance to be the elephant doctor during Dasara. “Yes, I was nervous about being assigned such a big responsibility and had no clue on the celebrations and had only read in the newspapers regarding the festival’s scale and grandeur and the responsibility that comes with it. But the experience gained at Bannerghatta Biological Park since 2018 came in handy,” Dr. Ramesh told Star of Mysore.

He said that he had developed a bond with animals including elephants at Bannerghatta and that helped him scrape through the first time and this Dasara experience has helped him to gain vast knowledge. “I know this one year experience is not at all enough when it comes to handling Dasara elephants. Initially it was challenging and I am glad that the celebrations were incident-free. Every day is a learning process and I hope to do even better next year,” he said.

The 28-year-old Doctor is the native of Chatrada Hosahalli in Maddur taluk of Mandya district. He obtained his post-graduate degree in surgery and radiology at Hassan. He joined Government service in 2018 and started his first assignment at Bannerghatta Biological Park. In August 2021, he was posted to Nagarahole Tiger Reserve region and successfully fitted radio-collar to two male and two female wild elephants after capturing them. After the procedure, the elephants were driven back to the wild.

Apart from taking care of over 25 elephants in Bannerghatta, he has experience in driving away wild animals including elephants, leopards and bears back into the forests with the help of combing specialist Abhimanyu. “The close bond with Abhimanyu and his mahout Vasantha at various encounters since the last three years helped understand Abhimanyu better as he efficiently performed the role of Howdah Elephant,” Dr. Ramesh added.

Not only field experience, he boasts of medical experience and knowledge of animal health and food habits as he has practical exposure in conducting over 15 to 20 post-mortems of elephants that died due to various reasons.

“At Bannerghatta Biological Park, there are three divisions — safari, rescue and zoo. When I was there, there were over 100 lions that were rescued from various circuses. Due to age factor and various other reasons, over 62 lions died and I had performed the post-mortem,” he claimed.

“There lived a lioness by name Sana and she used to devour her cubs soon after birth. In 2018-19, she gave birth to 12 cubs and we had the responsibility of taking care of all the cubs and we used to feed them with goat milk and we managed to save 9 cubs. They were let off in the safari area,” he said.

A close watch on health

Elephants are show-stoppers of the Dasara celebrations and it is a huge responsibility to take care of them. The elephants are extended warm hospitality and, in turn, the gentle giants take part in the ‘Vijayadashami’ procession with élan.

“They get special nutrition — sugarcane, jaggery, hay, paddy, green gram, urad dal/black gram, coconut and boiled vegetables along with dietary supplements. Since elephants are sensitive, thorough preparation is required to acclimatise them to the city atmosphere and any small illness would have a huge impact on the festival,” he said.

“We monitor their health round-the-clock and ensure they stay fit for the ‘Vijayadashami’ procession. We watch their dung closely to find if the animal is suffering from any disease or indigestion.  This is the only way to see if the elephants are healthy and they don’t have a stomach upset,” he added.