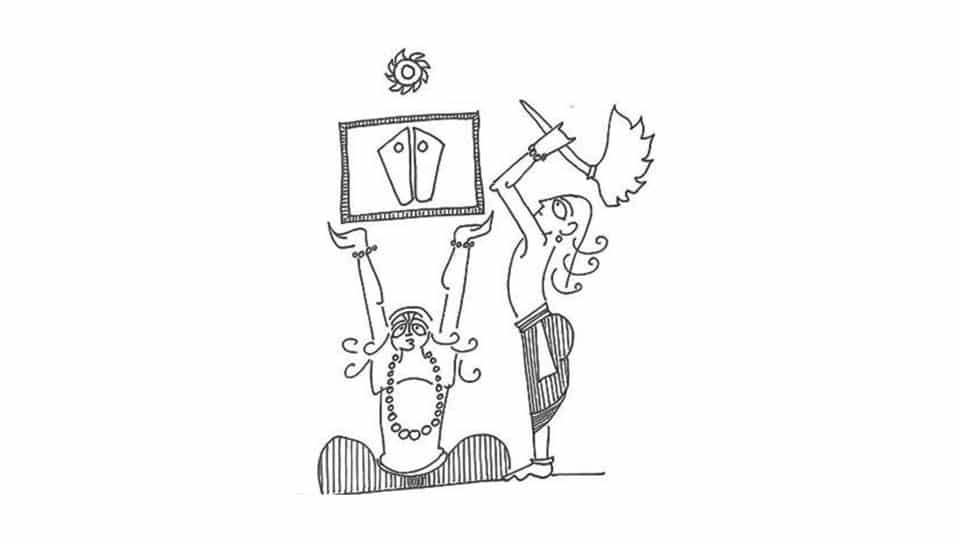 In the Ramayana, how did Bharat demonstrate to the people that he had rejected his mother’s ideology of capturing the throne through cunning, and how he wanted Ram to be king and spend his life serving as Ram’s regent? He did so by placing Ram’s footwear on the throne. He did it by choosing to live as a hermit outside the city of Ayodhya. As a member of the royal family, he knew demonstration was key to communicate with the public. People see more than they hear. Darshan is far more effective than shruti.

Likewise, in Islam, it is important to repeatedly say that ‘God is Great and there is no God but Allah, and that Muhammad is his last and final prophet.’ And it is important to demonstrate your daily allegiance to God by praying to him in a particular way facing a particular direction. And it is important to reaffirm this annually by fasting during Ramzan and by participating in the Haj once in your lifetime, and by giving away a portion of your wealth to those less than fortunate from you. These are five pillars of Islam, where demonstration of faith is the key.

How do you show respect for elders? By falling at their feet, according to some; by not smoking in front of them or standing up when they enter the room, say others. How do you show interest and support a friend? By continuously liking their Facebook updates and always commenting on them. How do you demonstrate patriotism? By standing up when the national anthem is played. How does one demonstrate minority appeasement? By allowing for regular use of loudspeakers for religious purposes that disturb neighbourhoods. How do you demonstrate nationalism? By shouting Bharat Mata ki Jai, according to Hindu Right Wing.

READ ALSO  Ram and the Rooster

Karni Sena knows this. By publicly defying the government, they are demonstrating their power as a vote bank. The government’s silence over their bullying demonstrates ruling party’s submission to caste hierarchy of Rajasthan electorate. A similar bullying technique by urban elite, women or homosexuals, for example, will be met with harsh force, demonstrating how most political parties do not see the urban elite, women or homosexuals as a significant vote bank.

A leader’s behaviour more than his words reveal his personality. That the current Prime Minister does not hold press conferences, and prefers carefully choreographed television interviews, reveals his discomfort with being questioned and so his authoritarian nature. That he prefers to talk directly to the people of India via radio, a medium not used by the elite, reveals his contempt for the elite and his dependence on the votes of the multitudes who are conditioned to listen, not question. The previous Prime Minister, by contrast, never ever publicly or privately questioned the sense of entitlement of the Gandhi family, thus demonstrating his complete awareness of his source of power, which was neither the party nor the electorate.

Belief shapes behaviour. When we see behaviour we can decode the underlying belief. However, the opposite is not true. We cannot change people’s beliefs by forcing them to behave in a particular way. A patriotic man will stand when the national anthem is played; but standing while the national anthem is played is no indicator of patriotism. It can also be a charade. This is one thing most people fail to notice. A religious person will go to temple, but going to the temple cannot evoke religiosity in a man.

Likewise, forcing someone to shout Bharat Mata Ki Jai, will not instil love for the nation in them; but it will help isolate those whose faith prevents them from bowing before ‘false’ Gods. And that is a useful political currency for some.