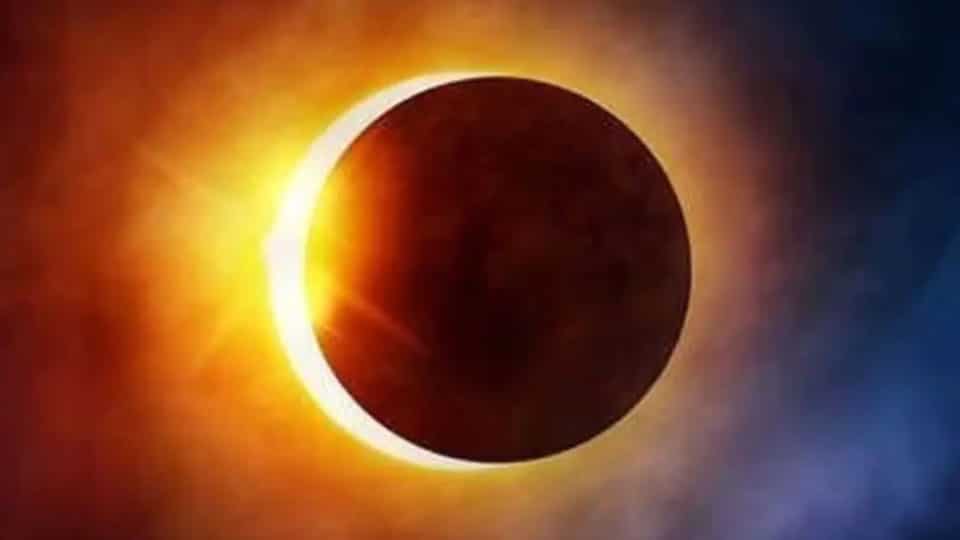 The great annular solar eclipse last seen in many parts of Karnataka, Kerala and Tamil Nadu on 26th December, 2019 is still fresh in memory. An even more spectacular annular eclipse is due on Sunday (June 21, 2020) but it can be seen as such only within a narrow 22 km wide belt passing through parts of Rajasthan, Haryana, Punjab, Uttar Pradesh and Uttarakhand.  It will however be visible as a partial eclipse everywhere in the rest of the country.

How are solar eclipses caused?

Before I proceed further, let me explain how solar eclipses are caused. At predictable times during the motion of the Moon around the Earth and of the two together around the Sun, the three objects may be lying nearly in a straight line for short duration.

When the Moon lies between the Sun and the Earth (on a new moon day), the latter can be found in the shadow of the Moon and hence sunlight may not be falling on certain parts of its surface at any given time.  This is when a solar eclipse can occur.   As seen from any point on the Earth, the Sun may be eclipsed, partially or wholly, depending on the geometry of the three bodies.

The most common type of solar eclipse is the partial one where only a portion of the solar disk is visible to the observer and is not of much interest.  Much rarer is the total eclipse when for a brief period of a few minutes, the entire disk of the Sun is hidden from the observer’s view.  At any instant during a total solar eclipse, the Sun will be completely obscured and day turns very nearly into night for the duration of totality.

The visibility of the solar corona during the total phase is one of the most spectacular shows put on by nature.  The rarity of total solar eclipses at any particular location on earth makes the experience all the more memorable and a once in a lifetime experience for most people.

Another very rare type of solar eclipse is the annular one in which the apparent size of the Moon is not sufficient to blot out the entire disk of the Sun and, for this reason, a thin ring of the solar surface is visible for a few minutes before and after the three objects are perfectly aligned. Two such annular eclipses could be seen in South India, one on 15th January 2010 and the other last year on 26th December 2019.

Solar and lunar eclipses as seen from the Earth would not have been possible at all but for a very fortuitous and remarkable circumstance relating to the three celestial bodies. The apparent sizes of the Sun and the Moon as seen by us on Earth just happen to be very nearly the same, approximately half a degree in angular diameter. The sizes however are not constant because of small but distinct periodic variations in the distances between any two of the three bodies.

This makes the apparent diameter of the Moon sometimes slightly larger than that of the Sun and this is when the solar eclipse can be total.  When the reverse happens, we can have the outer parts of the Sun visible as a thin annular ring when the three bodies are aligned perfectly; this is when an annular eclipse occurs.

During a partial solar eclipse, a certain fraction of the solar disc is visible at all times and this will be a minimum at the maximum phase.  Depending on the location, this can vary from just over zero to just under 100. Near the midpoint of an annular eclipse, a thin ring of the Sun surrounding the Moon will be visible, popularly called the ring of fire.  It can be dangerous to see even this with the naked eye.

A part of the path of annularity passes through Rajasthan. Any observer located on the path will be able to see the whole of the annular eclipse. Eclipse or no eclipse, one should never see the bright Sun with the naked eye because of possible serious damage to the retina.  See the Sun directly only through viewing devices fitted with safe solar filters.  Specially made viewing goggles are most suitable for individual viewing.

Suratgarh in Rajasthan is one of the best sites for viewing the annular eclipse because of the promise of cloudless skies. With an obscuration of close to 99 percent at the peak of annularity, one should expect a substantial dimming of the day light and an equally significant drop in atmospheric temperature in the path of annularity.

Depending on the actual location, one can also expect to see the fascinating Bailey’s beads, but definitely not the diamond ring and the solar corona, both characteristics only of a total eclipse.

[For an animation of the eclipse and related details for any specified location see:

While eclipses are of great scientific and visual interest for some, the vast majority of people in the country look upon them as unwelcome and evil events which affect their personal lives negatively and from which they need to protect themselves. Many of them literally lock themselves up in their homes and come out only after the ‘evil’ has receded.

Most shops, hotels, schools and offices are usually closed, streets are virtually deserted and life comes to a near standstill. Even the current Coronavirus pandemic is not such a dampener.

Even as the gigantic Sun is eclipsed by the puny Moon for a brief period, many civilised and educated human beings undergo a total eclipse of their reasoning faculty. It is only the insignificant minority of diehards, immune to superstitions and blind beliefs, who venture out and try to view such events.

Even among them, many are unaware of the potential dangers of seeing the bright Sun directly with their naked eyes. Very few possess the right kind of solar filters for seeing the Sun safely. Some people who do know that it is unsafe to see the Sun with the naked eye assume that it is equally unsafe to see the total solar eclipse (when the Sun is in fact not visible at all) with bare eyes and so keep off and miss out on a great opportunity.

I and my small team of eclipse enthusiasts had originally planned to view the event from Suratgarh, Rajasthan but we found it physically impossible to reach the venue because of the COVID crisis. This has been a great disappointment for all of us. However, we will have the vicarious experience of watching the event being webcast by the well-known astronomer and astrophotographer Ajay Talwar from Sirsa in Haryana. This webcast is available at: http://www.youtube.com/user/ajaytalwar80