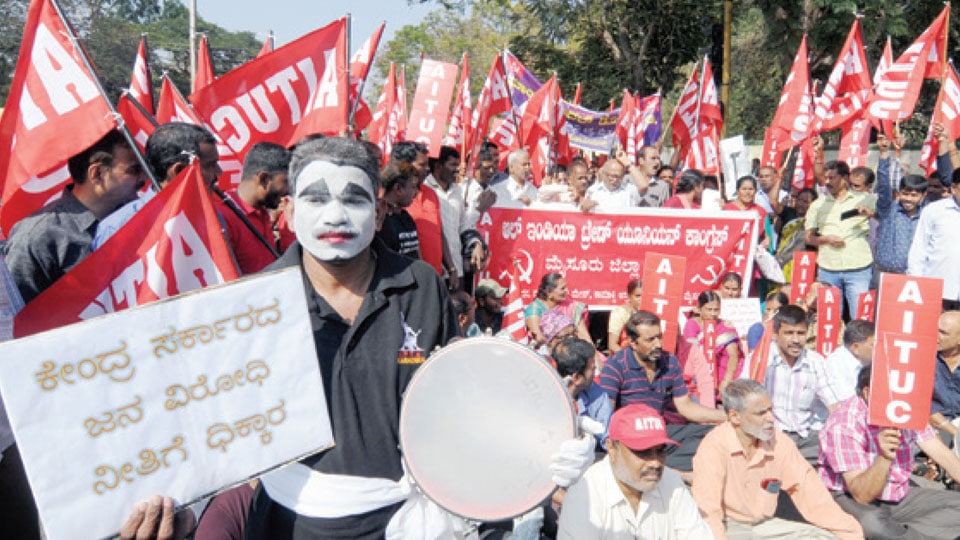 While a few shops in the central business district remained closed, others were found open and doing business as usual.

The strike did not have any impact on train services. But less than normal passengers were seen in trains to various destinations from the city.

Although all Government Offices were open as usual, the attendance was less when compared to normal days, according to sources. The City Law Courts too functioned as usual.

Most of the educational institutions remained closed in the district as the Deputy Commissioner had declared a holiday as a precautionary measure.

All inter-State schedules were cancelled and as such there were no buses to Kerala and       Tamil Nadu.

Hospitals and emergency services were not affected. Autos, lorries, goods vehicles and other public transport vehicles plied as usual. However, several private buses were off the roads and only a few operated.

The APMC Yard at Bandipalya on Nanjangud Road and  RMC Market on Sayyaji Rao Road functioned normally. Indira Canteens in city were open.

Devaraja Market, V.V. Market and other markets saw business as usual, with the general strike making no impact on them.

As part of the general strike, thousands of workers under the banner of AITUC, CITU and other Trade Unions and coming from all industrial areas of the city like Hootagalli, Metagalli, Belavadi, Hebbal, Vishweshwaranagar, Yadavagiri and Koorgalli, took out a bike rally from JK Tyres on KRS Road to the Town Hall, passing through Industrial areas, Ring Road, Hunsur Road, Vinoba Road, Ramaswamy Circle and Chamaraja Double Road.

Joining the strike, Post Office employees, under the banner of All India Postal Employees Union (AIPEU) and National Union of Postal Employees (NUPE), held a demonstration in front of the Head Post Office at Nehru Circle on Ashoka Road, urging fulfilment of their demands, which included regularisation of service, filling up of vacant posts, implementation of the recommendations of Kamalesh Report and scrapping of privatisation moves.

In another protest, hundreds of industrial workers and Anganawadi workers, attached to various Trade Unions, staged a demonstration at Ramaswamy Circle for over an hour, following which they marched in a procession to the Town Hall, shouting slogans against the Centre for its alleged anti-labour policies.

Apart from seeking a minimum wage of Rs.18,000, the protestors demanded the Centre to abolish the contract system and privatisation of PSUs.

Seshadri said that the industrial workers and Anganawadi workers will continue the strike tomorrow also.

Trade Union leaders are scheduled to address a massive gathering at Town Hall, where the Centre will be urged to stop pursuing anti-labour policies.

Police had made elaborate security arrangements all around the city to ensure that no untoward incidents take place and the strike passes off peacefully.

In Nanjangud, normal life was paralysed by the bandh with banks, schools, colleges and many industries remaining shut. However, petrol bunks, cinema halls, government offices                   were open.

Devotees, who arrived from various parts of the State to Sri Srikanteshwara Temple in the town, faced the heat of the strike as they were stranded with no buses and autos.

Over 2,000 labourers including Labour Union leaders of 20 Industrial Units of Nanjangud taluk led by AITUC and CITU took out a massive rally on the main streets of the town, shouting slogans against the Union Government. The protesters blocked Ooty-Mysuru Road near Hullahalli Circle throwing traffic out of gear for some time.