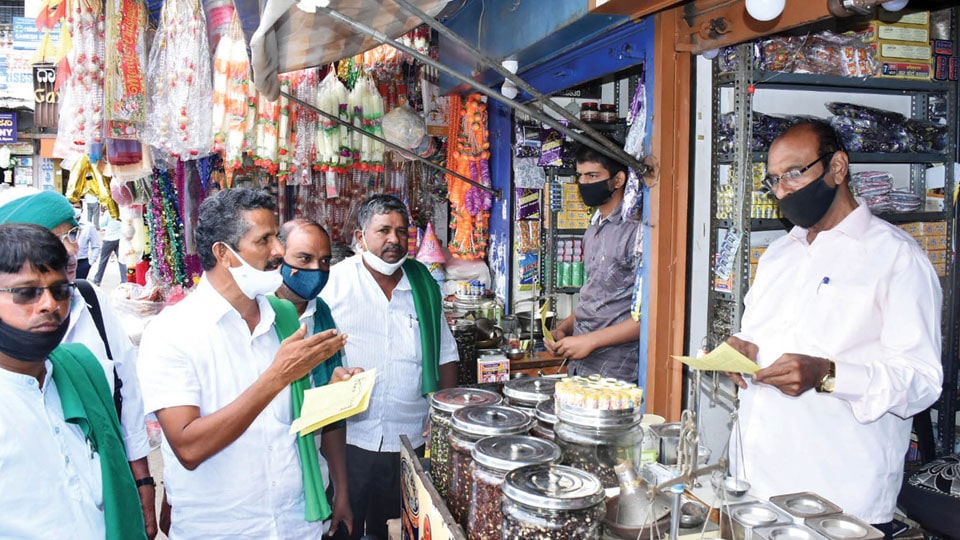 However, most associations of the service sector have expressed only moral support.

To drum up support, farmer leaders, armed with pamphlets and other information materials, visited the city central areas this morning requesting traders, shopkeepers, vegetable and fruit vendors and other wholesale merchants to close business for the day in support of the bandh.

Farmer leaders were seen forming groups and visiting areas like Devaraja Market, Chikka Gadiyara, Shivarampet, Sayyaji Rao Road, Ashoka Road, D. Devaraj Urs Road and surrounding areas where a cluster of businesses are located seeking support for the bandh. They were seen explaining to the vendors and traders on how certain policies of Governments are affecting the common man.

Meanwhile, most of the Opposition parties in the country have backed the bandh call.

While some Bank Employes Unions have supported the bandh and as such, banking services are likely to be affected to a certain extent. Mysuru Hotel Owners’ Association President C. Narayana Gowda said that hotels will be open as usual tomorrow.

Hotel industry comes under essential service and the industry has just begun to look up following the outbreak of COVID-19 pandemic and the Association at this juncture, cannot support the bandh. However, the Association is supportive of the cause of farmers, he added.

KSRTC will operate buses as usual, both on the city and rural routes. Institutions of higher education, markets, commercial and business establishments and essential service shops and centres will remain open. Goods and passenger transport are unlikely to be hit as auto and taxi associations have not yet declared their support.

The Bharath Bandh comes just three days after pro-Kannada groups called for a Karnataka Bandh on Dec. 5 in protest against the Yediyurappa Government’s decision to form Maratha Development Corporation.