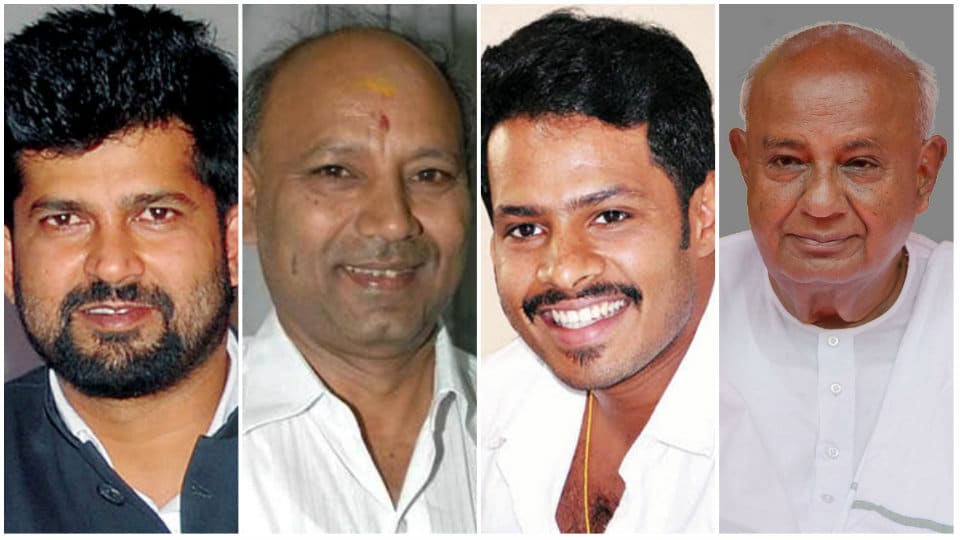 Monday is considered auspicious than Tuesday and candidates are looking for the precise moment to file their papers, in consultation with astrologers and well-wishers. While filing nominations, the candidates will be accompanied by a large number of supporters in a show of strength and to send a strong message to their opponents.

In Mysuru-Kodagu Parliamentary Constituency, sitting BJP MP Pratap Simha will file his nomination tomorrow at 12.30 pm and before that he will perform puja at Kote Anjaneyaswamy Temple at 9 am and hold a public meeting. Later, he will lead a procession to the DC’s Office

where he will file his papers. Simha will be accompanied by a battery of party leaders and supporters. He is contesting against C.H. Vijayashankar of Congress.

Former MP C.H. Vijayashankar will also file his nomination papers for Mysuru-Kodagu seat tomorrow between 12.30 pm and 1.30 pm. Vijayashankar too will perform puja at Kote Anjaneyaswamy Temple between 10.30 am and 11.30 am and lead a procession up to DC Office where he will file the papers.

ALL EYES ON NIKHIL

All eyes will be on Nikhil Kumaraswamy, son of Chief Minister H.D. Kumaraswamy tomorrow when he will file his nominations for Mandya Lok Sabha seat from JD(S) as a Congress-JD(S) coalition candidate. He was scheduled to make a partial submission of his nomination on Mar. 21 and complete formalities on Monday, Mar. 25. However, on Mar. 21, he deferred filing papers based on the advice given by astrologers. It is said that Mar. 25 is also an auspicious day for Nikhil to file his nomination.

Nikhil is pitted against veteran actress Sumalatha the wife of former actor, MP and MLA M.H. Ambarish who is contesting as an Independent. Sumalatha has already filed her nomination papers on Mar. 20 and on that day, thousands of people attended the massive road show. Sandalwood stars Darshan, Yash, Doddanna and Rockline Venkatesh stood beside Sumalatha expressing support to her.

Kumaraswamy and his cabinet colleagues were glued to a television set at a resort in Krishna Raja Sagar on Mar. 21 and they watched Ambarish fans putting up a huge show at Silver Jubilee Park in Mandya. Later reacting on the crowd at Sumalatha’s rally, Kumaraswamy had said that he can gather a greater number of people than those who were present at Sumalatha’s rally and it was no big deal.

Party sources in Mandya said that more than 2 lakh people will converge in Mandya as a show of strength when Nikhil files his nomination papers. Local JD(S) leaders and party workers are leaving no stone unturned to ensure that a massive crowd turns up in Mandya tomorrow.

In Tumakuru, former Prime Minister H.D. Deve Gowda will file his papers tomorrow at the DC’s Office as a joint candidate of the JD-S-Congress alliance. 85-year-old Gowda has shifted his Parliamentary constituency from Hassan after representing it for a record six times since 1991 to pave the way for his grandson Prajwal Revanna, son of PWD Minister H.D. Revanna, to contest in his place for the first time.

To add to the headache of the coalition partners, sitting Congress MP from Tumakuru S.P. Muddahanumegowda has announced that he will file his papers tomorrow as the Congress candidate. “I will also file nomination on Monday as a Congress candidate from Tumkur again even if Deve Gowda files nomination as a JD(S) candidate. In the event of my party not giving me B-form as its contestant, I will still be in the fray as an Independent,” an agitated Muddahanumegowda said yesterday, adding he cannot let down his supporters at any cost.

Ironically, Deputy Chief Minister from the Congress G. Parameshwara, who hails from Tumakuru district, is said to be backing Muddahanumegowda unofficially due to mounting pressure from the party’s local leaders and cadres.

Reports from Bengaluru this morning say that Deve Gowda will also contest from Bengaluru North against BJP candidate D.V. Sadananda Gowda. Even K.N. Rajanna, former Madhugiri MLA (Congress) and AHINDA leader, will file his papers from Tumakuru seat tomorrow as a rebel candidate.

Actress Sumalatha, who is contesting against Nikhil Kumaraswamy of JD(S), will perform a ‘Gruha Pravesha’ ceremony at her rented house in Mandya tomorrow. It will be a simple ceremony and Sumalatha will not be present. Instead, her supporter and Ambarish fan Belur Somashekar will lead the rituals.

Sumalatha has rented the house at Chamundeshwarinagar Third Cross in Mandya. In the past too, Ambarish had rented out this particular house and had seen many electoral victories. This house is palatial and has been built as per Vaastu and it remains to be seen if this house will prove lucky for Sumalatha.

2 COMMENTS ON THIS POST To “Bigwigs to file nominations tomorrow”