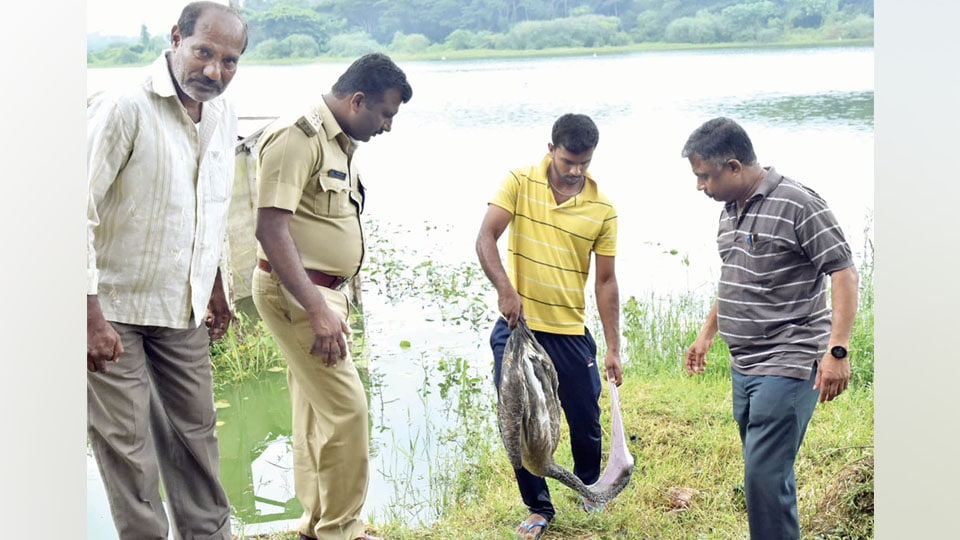 Mysuru: A high alert has been sounded at Ranganathittu Bird Sanctuary, Kokkare Bellur, Lingambudhi Lake and the Kukkarahalli Lake to prevent the occurrence and spread of Avian Influenza or Bird Flu. This precaution has been taken by the Forest Department following the death of another Spot-Billed Pelican at Kukkarahalli Lake this morning.

The carcass of the bird was found floating near the boating jetty. One more Spot-Billed Pelican — Pelicanus Philippensis — had died at the same place on Oct. 26. Though the Forest Department has not suspected Bird Flu to be the cause of the death of birds, chances of the disease occurrence and spread cannot be ruled out unless the samples are tested and certified in laboratories.

The Department does not want to take any chances this time. Last year, there was a Bird Flu scare at Kukkarahalli Lake following the death of a couple of Pelicans and the Mysuru Zoo was closed for a month in January 2017 due to a similar threat.

Viscera to Bengaluru lab: Due to a series of holidays, viscera samples of the bird that died on Oct.26 could not be sent to the laboratory. This morning, those samples along with the bird that died today were sent to Southern Regional Disease Diagnostic Laboratory of the Institute of Animal Health and Veterinary Biologicals (IAH&VB) at Hebbal in Bengaluru for tests. The entire carcass of the dead bird was wrapped in thermocol and has been sent to Bengaluru. The results are awaited in a couple of days.

Speaking to Star of Mysore, Deputy Conservator of Forests, Mysuru Division Dr. K.C. Prashanth Kumar said that the high alert has been sounded as a precautionary measure.

“Though it is premature now to declare that the cause of bird death is due to Bird Flu, we are not taking any chances. Officials and staff managing Ranganathittu Bird Sanctuary, Kokkare Bellur and Lingambudhi Lake have been asked to closely observe the birds to find if they are droopy and if any fluids are coming out of their mouth,” he said.

“It all depends on the report we get from IAH&VB. Based on the report, we will spray disinfectants and antibiotics around the Lake to prevent the disease from spreading in case the viscera samples test positive for Avian Influenza. The samples were sent today itself as it is a Government holiday. Initially, the samples were to be sent to Regional Animal Disease Diagnostic Laboratory on Dhanvanthri Road but considering the gravity of the issue, we have sent the samples to IAH&VB, Bengaluru. Protection of birds is our priority,” he said.