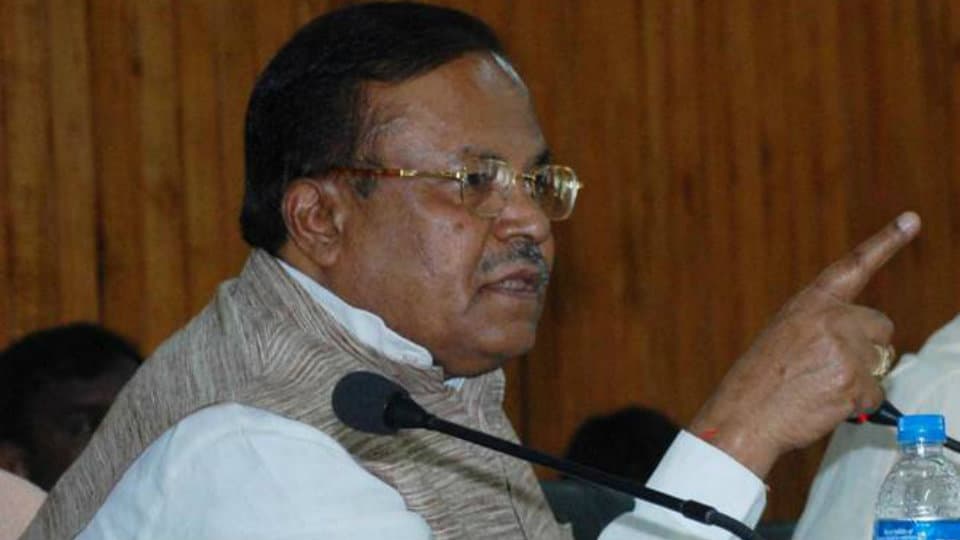 Bengaluru: The State BJP on Saturday mounted an attack on Chief Minister Siddharamaiah, accusing him of nepotism in illegally granting land to a company owned by his son Dr. Yathindra’s former business partner.

Addressing a press meet, BJP leader B.J. Puttaswamy demanded that 2.19 acres of land in Hebbal illegally allotted to a company linked to CM’s son Dr. Yathindra, he cancelled and handed over to Arkavathy layout allottees.

Puttaswamy said this was the first in a series of scams related to Siddharamaiah that the party will expose once every 2-3 days.

In January last year, 2.19 acres of land coming under survey Nos. 109-114 in Hebbal, which is currently worth Rs. 200 crore, was allotted to Shantha Industrial enterprises in exchange for land acquired from the company in Kethamaranahalli, Mahalakshmi layout in 1977.

The Bangalore Development Authority (BDA), had paid  Rs. 29 lakh as compensation to the company then.

“Dr. Yathindra’s friend Rajesh Gowda became a partner in Shantha Industrial Enterprises in 2010. In 2014, Dr. Yathindra became a Director at Matrix Imaging Solutions India (P) Ltd., a company established by Gowda in 2009,” Puttaswamy said. He alleged that it is clear that the Chief Minister intervened to get the land allotted to Shantha Industrial Enterprises, although there is no provision for re-allotment of alternative land, that too after 40 years.

Maintaining that the 2.19 acres was meant for Arkavathy Layout, Puttaswamy demanded that the Chief Minister drop the allotment of 2.19 acres and hand it over to Arkavathy layout allottees.

In a swift reaction to the BJP’s allegation, CM Siddharamaiah said that the he will advise his son to file a defamation case against BJP MLC B.J. Puttaswamy who levelled the allegations.

Claiming that the accusations were baseless and politically motivated, the CM said the allotment of land to Shantha Industrial Enterprises had no connection with his son and the approaching elections had driven the BJP to resort to such tactics.

Lashing out at the BJP for making baseless charges for political gains, he said MP Shobha Karandalje had made false allegations earlier and it was reiterated by B.J. Puttaswamy.

‘I will ask my son to file a defamation case against these leaders. The BJP leaders have not documents to justify their charges,’ he added.

Meanwhile, Dr. Yathindra said the agreement was between Shantha Industries and Matrix Imaging Solutions and he had nothing to do with the agreement. He further said it was a politically motivated allegation meant to defame his farther.