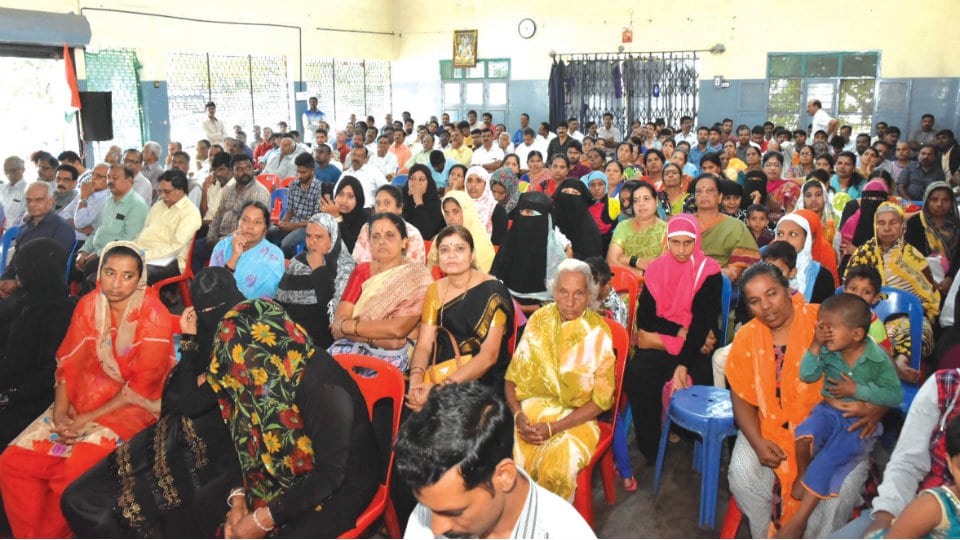 Mysuru: Even as protests continue to rage across the country opposing the Citizenship Amendment Act (CAA), the KR Unit of the BJP held ‘Janajagrutigagi Vichara Vinimaya,’ an awareness programme on CAA, marking the birth anniversary of former Prime Minister Atal Bihari Vajpayee at Vidyashankara Kalyana Mantapa in Agrahara here yesterday.

The programme in which many Muslim leaders took part, was inaugurated by Agrahara’a Azam Khan Masjid Secretary Noorulla Sheriff.

Addressing the gathering, KR MLA S.A. Ramdas said that the Congress, which has lost power, was behind the anti-CAA protests going on in the country. Maintaining that many people from the Minority community had voted for the BJP in the last Lok Sabha polls, which the Congress lost badly, Ramdas accused the Congress of fanning protests and violence in the name of CAA.

Pointing out that the BJP has distributed pamphlets on CAA  in Urdu language in order to clear the doubts of the Muslim brethren regarding the Act, Ramdas claimed that protests were going on only in BJP ruled States and wondered why there were no such protests in non-BJP ruled States.

Asserting that no Muslim citizen of the country would be driven out, Ramdas argued that the Act is primarily aimed at weeding out illegal immigrants from bordering countries such as Afghanistan, Pakistan and Bangladesh.

Stating that Muslims need not be worried about the Act, Ramdas challenged the Congress to organise a similar programme at Town Hall in city where he will explain the bluff  of the Congress.

He also questioned why the Congress, Communists and other Opposition parties, who are opposing the Act now, remained silent when the Bill was tabled in Parliament.

Asserting that there were no clashes regarding the CAA issue in KR Assembly segment, Ramdas once again lashed out at the Congress for misleading the Minority community.