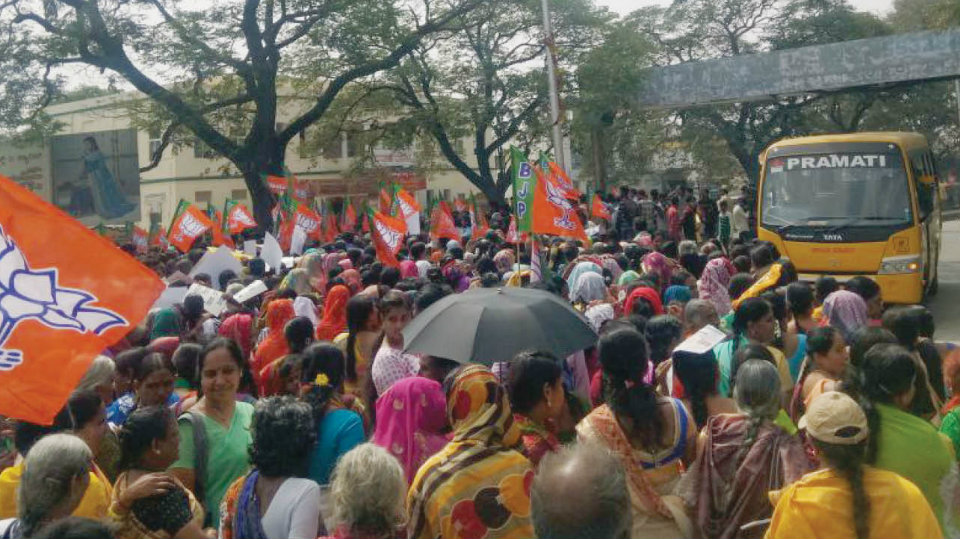 Mysuru: In the wake of Karnataka Bandh, the BJP is pulling out all stops to ensure that the Nava Karnataka Parivartana Yatra a success in city. Party National President Amit Shah is scheduled to arrive at 3 pm today and will address the crowd at Maharaja’s College Grounds.

With no KSRTC bus service, BJP activists have hired over 200 private buses, 25 city buses, 250 autos and an undisclosed number of mini buses and lorries to ferry people from taluk headquarters, city and outskirts.

Two separate rallies – one from Gun House Circle led by former Minister S.A. Ramdas and one more from Ramaswamy Circle led by State BJP President B.S. Yeddyurappa – have been planned and over 10,000 people are expected to participate. The two rallies will converge at Maharaja’s College Grounds at 3 pm where Amit Shah will address the rally. Interestingly, Yeddyurappa will be brought to the Maharaja’s Grounds in a special chariot.

Amit Shah has already instructed the BJP State unit to begin the programme without waiting for him. Once Shah arrives, he will formally inaugurate the rally and address the gathering.

City Police have made elaborate security arrangements for Amit Shah’s first visit to Mysuru. Shah, who has Z-Plus security cover, will arrive in a special flight at Mandakalli Airport, directly from New Delhi around 3 pm. He will be provided escort vehicles and additional layer  of security by the District Administration.

He will be accompanied by Union HRD Minister Prakash Javadekar. Shah will leave  Mysuru after participating in the rally at 4 pm.

DCP (law and order) N. Vishnuvardhana said all scheduled security measures are in place for Shah’s visit. “Since the event is being organised at a particular place we have cordoned off the venue as a precaution,” he said.