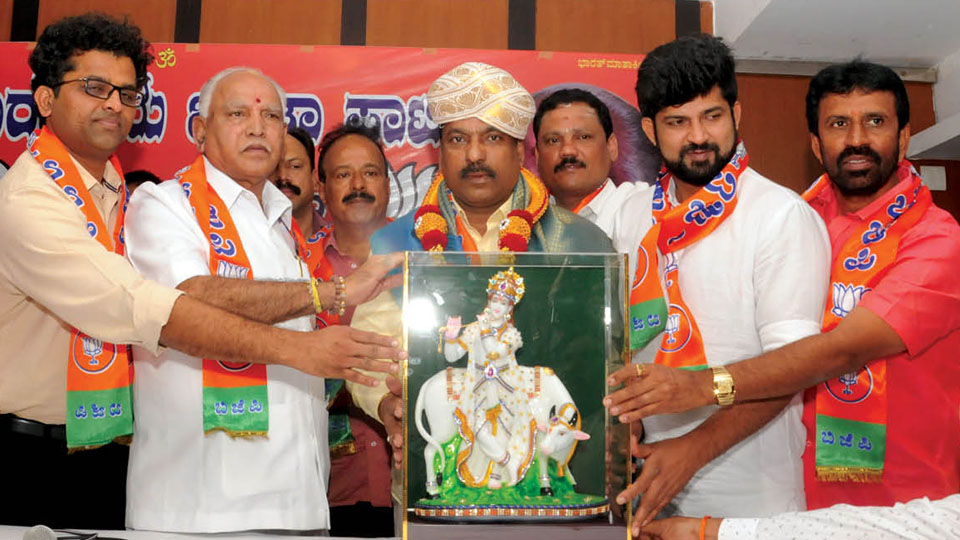 BJP lost Assembly polls due to confusion within party: BSY

Mysuru: Maintaining that the BJP lost the Assembly polls by a whisker due to some internal confusions here and there, State BJP President and Opposition leader B.S. Yeddyurappa has called upon the party workers not to get disheartened over Assembly poll loss and work hard for ensuring victory in maximum number of seats in the forthcoming Lok Sabha polls.

Speaking at the city BJP Executive Committee Meet at a private hotel here this morning, Yeddyurappa said that the party has set a target of winning over 20 Lok Sabha seats from the State.

Underlining the role of party workers in organising the party from the grassroots level, he said that he would tour 14-15 districts starting fromAug.9 and campaign for the party in the Local Body polls scheduled for Aug.29.

Pointing out that he was very much impressed about MP Pratap Simha’s achievements over the past four-and-a-half years, BSY said that the MP has played a crucial role in bringing Rs.700 crore grant for Mysore Airport development, Rs.7,000 crore for 10-laning of Mysuru-Bengaluru Highway and Rs.750 crore for the establishment of a Satellite Railway Station at Naganahalli, among many such other projects aimed at improving infrastructure.

Lashing out at the JD(S)-Congress coalition Government, Yeddyurappa said that it was a travesty of justice that a party which secured 38 seats came to power, while the BJP which won 104 seats had to sit in the Opposition.

Accusing the State coalition Government of non-performance, he alleged that the Government’s farm loan waiver remained only on paper, while in reality the Government had not taken RBI approval which was mandatory, for initiating the process.

READ ALSO  High Command will put an end to talks of change in guard: Minister Somanna

He reiterated his appeal to the party workers to gear themselves up for the Local Body polls and next year’s Lok Sabha polls and ensure a thumping victory for PM Modi.

State BJP President and Opposition leader B.S. Yeddyurappa felicitating former Karnataka Pradesh Hotel Owners Association President M. Rajendra, upon his appointment as the State BJP Secretary, during the city BJP Executive Committee Meet held at a private hotel in city this morning as others look on.

Yeddyurappa later left for Suttur Mutt at the foot of Chamundi Hill to take part in Basava Jayanti celebrations.