Home » News » He sells flowers in the name of Wadiyar He sells flowers in the name of Wadiyar

Mysuru: While there are hundreds of Mysureans who have still kept Srikantadatta Narasimharaja Wadiyar close to their hearts as he used to mingle with lay people, despite his royal stature, here is a common man who has gone a step ahead and given a divine status to the late Scion of Mysore royal family.

Meet Ramu, a flower vendor, who starts his day (rather every day) by garlanding the photo of Srikantadatta Narasimharaja Wadiyar by the side of the road. Only after praying to his ‘idol,’ Ramu starts selling flowers. And as if he has constant blessings of the Wadiyar, he does well in business too and is able to lead a comfortable life along with his family.

Ramu sells flowers on Pulikeshi Road near Mysore Central Jail at the junction where there are two giant pillars on both sides of the road. Old-timers call the place ‘Gumchi.’

Ramu sits on a steel chair next to the pillar on the footpath with flowers on a small table. On the pillar, he has placed a big portrait of Srikantadatta Narasimharaja Wadiyar in complete royal attire and seated on the Golden Throne 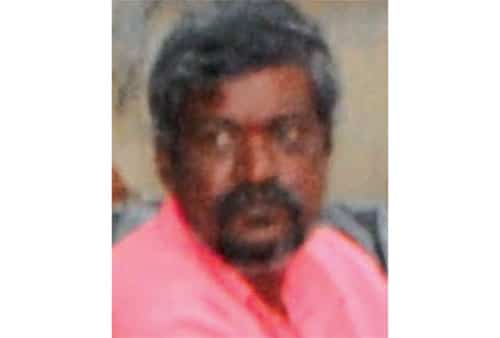 Every day Ramu comes in the morning with two to three varieties of flowers like Jasmine, Sughanda Raja and Kanakambara and sets up his make-shift stall.

Before starting his business with the usual ‘boni’, he makes sure that he garlands the portrait with a small string of jasmine. “I have been doing this ever since Wadiyar left us on Dec.10, 2013. It is an irreparable loss to entire Mysuru. The entire Wadiyar family starting from the earlier rulers centuries ago is a gift to the land,” he said.

With a sense of pride he narrated, Pramoda Devi Wadiyar, the widow of Srikantadatta Narasimharaja Wadiyar, visited him three to four times. “She came here along with her son Yaduveer Krishnadatta Chamaraja Wadiyar and daughter-in-law Trishikha Kumari Wadiyar and performed puja to Wadiyar’s portrait. Every time her vehicle passes through this road, ‘Pramodamma’ makes it a point to look at her husband’s portrait and at me,” he said. 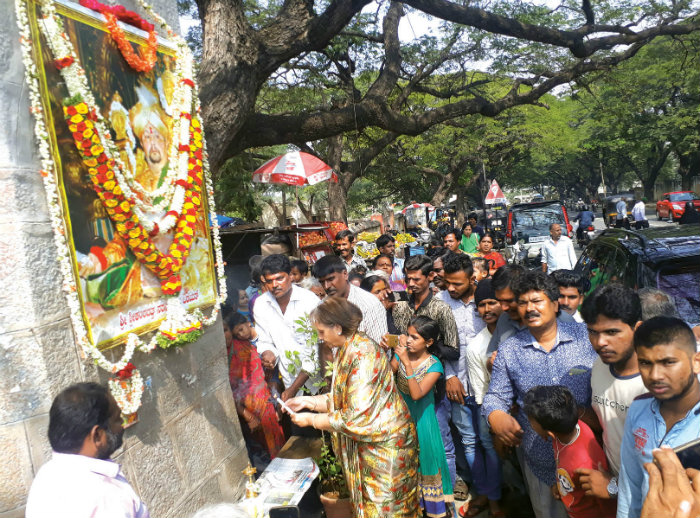 Pramoda Devi Wadiyar paying her respects to the portrait of Srikantadatta Narasimharaja Wadiyar.

As Star of Mysore was in conversation with Ramu, a red Audi SUV stopped by Ramu’s makeshift stall and the lady bought a few metres of jasmine strings and paid Ramu. Meanwhile, Ramu’s wife, along with her little grandson, brought freshly-strung jasmine buds (Mallige moggu) and kept them for sale. Soon, a couple of more vehicles stopped by and Ramu sold more of those fragrant jasmine strings.

Though it is a daily routine for Ramu, who says that his entire family depends on the income generated out of selling flowers, what stands out is his reverence for the late Wadiyar.