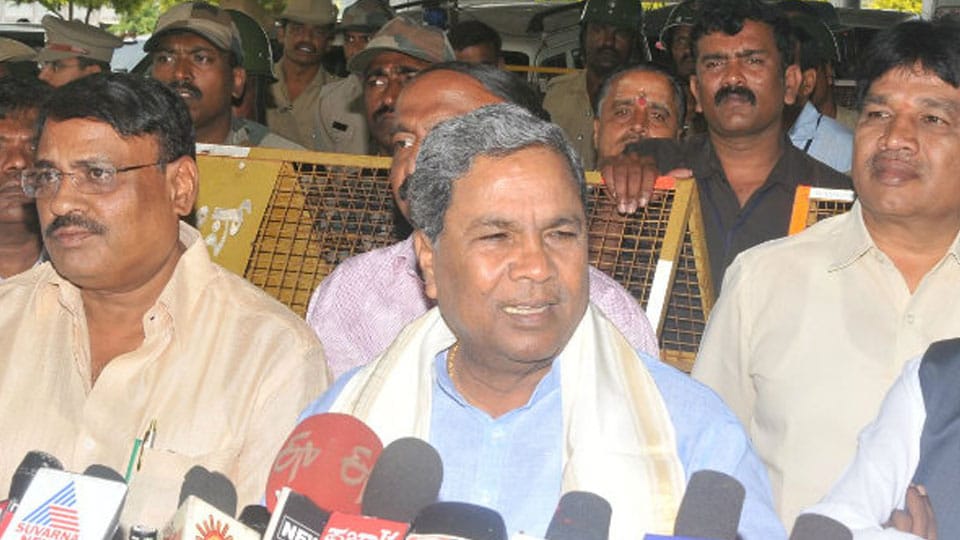 Mysuru, Sept. 4 (MTY,PM &VNS)- Former Chief Minister Siddharamaiah has accused BJP of practicing vendetta politics. Speaking to media persons on his arrival at Mysore Airport in Mandakalli this morning, he said that the Centre was misusing Constitutional bodies like Central Bureau of Investigation (CBI), Income Tax (I-T) Department and Enforcement Directorate (ED) to fulfil its political aspirations and curb the voice of Opposition.

Stating that there wasn’t a reason for ED to arrest former Minister D.K. Shivakumar, the former CM charged that Shivakumar was not even allowed to perform rituals to elders during Gowri-Ganesha festival days.

Stating that Chief Minister B.S. Yediyurappa being sympathetic to D.K. Shivakumar was only to misguide people, Siddharamaiah said that Yediyurappa would have prior information about the arrest and his sympathy was just eyewash.

“The BJP leaders have demonstrated in the past by their statements that they already have previous inputs of imminent arrests like it was demonstrated in the arrests of both Shivakumar and former Finance Minister P. Chidambaram. These are politically motivated arrests,” he alleged.

S.R. Mahesh hits out at BJP

Former Minister S.R. Mahesh , addressing media persons at his office on Rama Vilas Road this morning, also took a dig at BJP Government stating that the party was involved in vendetta  politics and misused autonomous bodies such as CBI and ED to threaten Opposition leaders.

Stating that he supported PM Modi’s aim to eradicate corruption, Mahesh, however, said that he opposed the way BJP was targeting Opposition in the name of curbing corruption.

He also called upon the Government to order a CBI probe into ‘Operation Kamala’ where huge money was paid to force MLAs to change loyalties.

“The CBI, which is investigating telephone tapping case, must also investigate conversations during ‘Operation Kamala’ and also the conversations by senior Police officers that have sullied the image of State Government, and come out with a detailed report,” he demanded.

Taking a dig at the Union Government, Mahesh said that the previous Congress- JD(S) coalition Government had released more than Rs. 1 lakh each for those who had lost their homes in Kodagu floods last year. But this year, though there is BJP Government at both State and Centre, not a single rupee has been released so far,” he said.

Calling all 25 BJP MPs to raise the issue, he said that the MPs were keeping quiet as they were afraid of losing their positions. He also said that the JD(S) headed by former Chief Minister H.D. Kumaraswamy had written a letter to the State Government demanding flood relief funds to be doubled.

When media persons asked about him boycotting this year’s Dasara, Mahesh said that BJP had toppled a pro-people coalition government in the State and his conscience did not permit him to participate in the celebrations. When asked about former Minister G.T. Devegowda taking part actively in Dasara, he said he knew nothing about that.

Former Chief Minister Siddharamaiah has yet again landed in a controversy after he was caught slapping a party worker in front of media persons at Mysore Airport this morning. The video is viral now.

Siddharamaiah, while returning after speaking to reporters and cameramen, slapped one Ravi who requested the former to speak to someone on his phone. Irked by Ravi’s behaviour, Siddharamaiah pushed the phone aside and slapped Ravi on his face. The slap, however, was not hard but looked like the former CM brushed Ravi’s face.

According to reports, Ravi, a Congress party worker, was speaking to someone on his mobile phone when Siddharamaiah was focussed in addressing media persons. This irritated the former CM. Later, when Ravi requested Siddharamaiah to speak on his (Ravi’s) mobile to someone who had called, a visibly irked Siddharamaiah used his hands to express his displeasure.