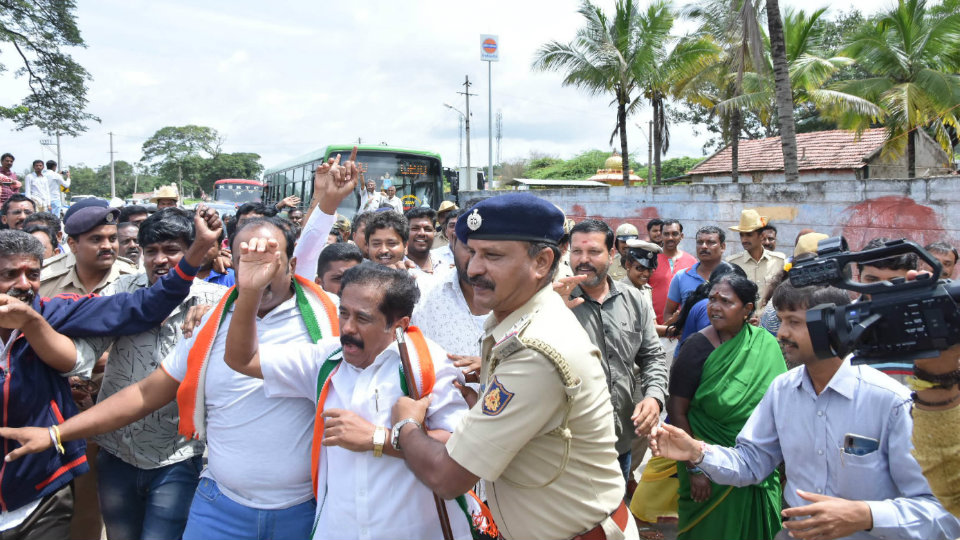 Mysuru, Sept.4(RKB&DM)- Protests erupted across the city this morning with fans of D.K. Shivakumar, Congress and JD(S) workers staging demonstrations at various places.

DKS fans vented out their anger by blocking the Ring Road at Bogadi junction for a few minutes. As a result, traffic was disrupted for sometime, before the Police intervened.

Congress and JD(S) workers  staged demonstration in front of CIIL blocking the every busy Mysuru-Hunsur Road. They claimed that Shivakumar was innocent and demanded his release.

In yet another protest, some city advocates along with Congress and JD(S) workers staged a demo in front of Mahatma’s bust opposite the Law Courts.

Former MLA taken to custody: Meanwhile, former K.R. MLA M.K. Somashekar along with over 100 Congress workers staged a demonstration near Gundu Rao Nagar. Even asSomashekar tried to block the busy Mysuru-Ooty Highway, Vidyaranyapuram Police took the MLA and the Congress workers into their custody.