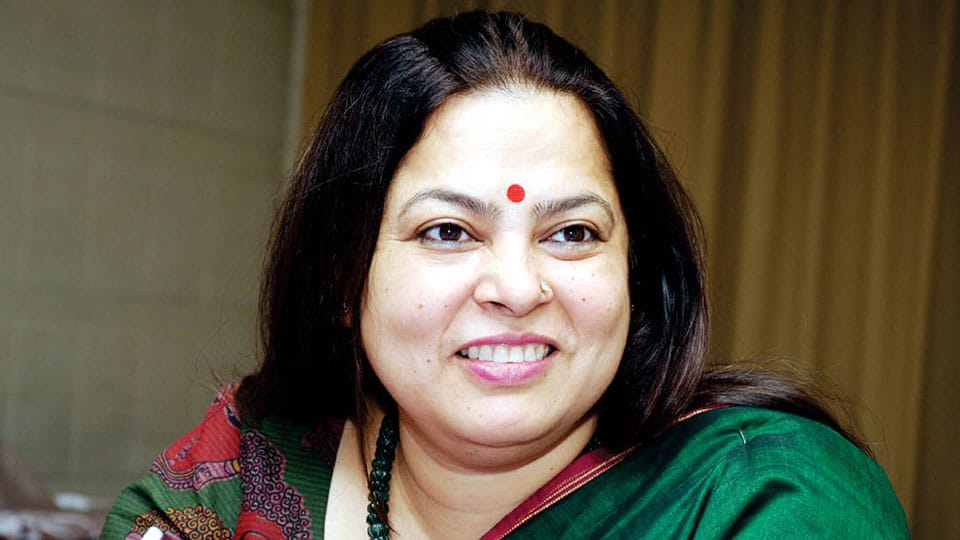 First visit to Mysuru: BJP National Spokesperson and Supreme Court lawyer Meenakshi Lekhi told ‘SOM’ that this was her first visit to Mysuru. “I had heard so much about Mysuru. I knew that it is the cleanest city and have also heard about the famous Dasara. However, destiny had not willed me to come here earlier,” she said and added, “Mysuru means so much to me now, I am even contemplating to buy a property here and live a retired life later.”

Mysuru:  Chief Minister Siddharamaiah-led Congress Government is the most corrupt one in the country, alleged BJP National Spokesperson Meenakshi Lekhi.

Addressing a press conference at Patrakarthara Bhavan here yesterday, she said that in the entire country one cannot see a corrupt government run, as the one by Siddharamaiah. There is corruption involved in all the projects and this government is ‘Seeda Rupaiah Sarkar,’ she charged.

Divisive politics: The Congress is following a policy of divide and rule and Chief Minister Siddharamaiah is trying to divide religion, caste and sub-caste in the State to gain political mileage, she said.

The State Government has failed to nab the killers of Scholar Dr. M.M. Kalburgi and Journalist Gauri Lankesh but the Congress is trying to create doubts among the people that BJP is involved in these killings and added to this it has not taken any action against the murderers of BJP and RSS workers, she alleged.

The law and order has completely collapsed and an atmosphere of fear has been created in the State. There are several allegations against the Ministers in the current Government and including Siddharamaiah, his friends and close associates are involved in several scandals, she charged.

Lekhi expressed confidence that the BJP will get a clear majority and will form the Government in the State.

Asked about B.Y. Vijayendra, she said that his services to the party are very essential and he has been appointed State Yuva Morcha General Secretary.

Later, speaking exclusively to Star of Mysore at a private hotel in the city, she said, in reply to a question, that State BJP President B.S. Yeddyurappa has always worked in the interest of the party from the beginning and there is not an iota of doubt that he is going to be the next Chief Minister of Karnataka.

On Vijayendra being denied ticket, she said that above all we are BJP workers first and everyone has to follow the rules of the party and listen to what the party leaders say. Whoever the party gives ticket to, one has to work in the interest of the candidate to see that he or she wins and this is the BJP’s core ideology.

To our readers: Watch out for an interview with firebrand BJP National Spokesperson Meenakshi Lekhi, who is also a Supreme Court lawyer, in ‘Star of Mysore’ soon.—Ed

Meenakshi Lekhi
All for Power BJP-Congress alliance in Mizoram!
Chamaraja Constituency: Public debate on May 2