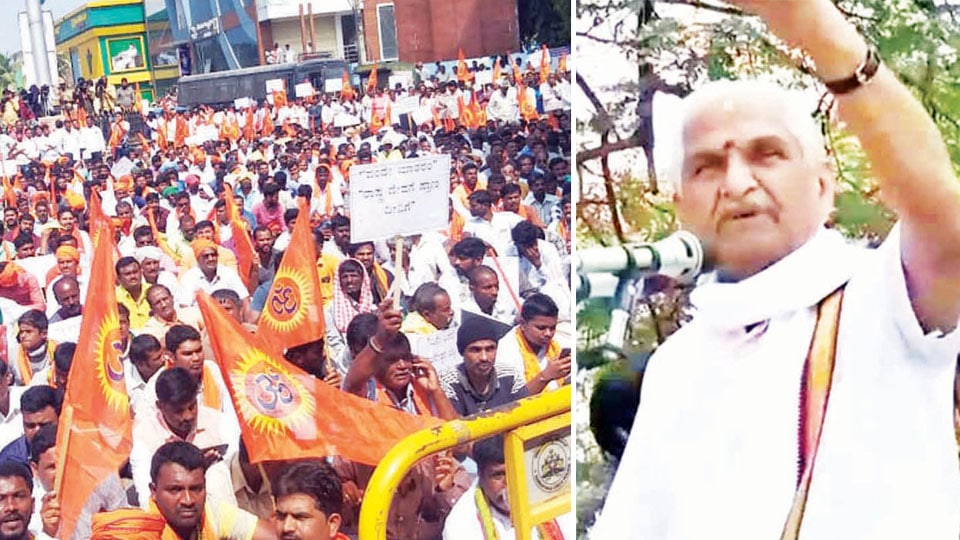 BJP takes out massive rally against Jesus Statue at Kanakapura

Bengaluru: Chants of ‘Jai Sri Ram’ and ‘Bharat Mata Ki Jai’ rent the air as thousands of BJP, RSS and VHP workers, under the banner of Hindu Jagaran Vedike (HJV) took out a rally at Kanakapura in Ramanagara district on Monday against the proposed installation of a 114 ft. tall Jesus Christ statue atop Kapala Betta (Hill)  in Kanakapura taluk.

The rally began from Ayyappaswamy Temple and concluded with a public meeting at Channabasappa Circle in Kanakapura.

Senior RSS leader Kalladka Prabhakar Bhat led the rally. Addressing the gathering, Prabhakar Bhat claimed that the people living in and around Kapala Hill do not want Jesus statue.

Wondering why a statue of Basavanna or Vishvesha Theertha Swamiji or Balagangadharanatha Swamiji, who have contributed to the nation, is not being installed at the site, Bhat accused Congress leader D.K. Shivakumar, who is also the Kanakapura MLA, of going ahead with the installation of Jesus statue just to please his leader Sonia Gandhi.

Accusing Shivakumar of playing politics for votes and notes, Bhat alleged that Kapala Betta, originally known as ‘Muneshwara Hill,’ was being appropriated with ulterior motives by Christian Missionaries and the same was being encouraged by Shivakumar.

Maintaining that the rally was just the beginning and more protests would follow if the plan to install Jesus statue was not dropped, he said that the rally was the countdown for the political downfall of D.K. Shivakumar and his MP brother D.K. Suresh. Bhat further said that the HJV will meet at Kolar on Jan.26 to decide the future course of action.

Prabhakar Bhat, who later visited the Hill, alleged that stone slabs from Muneshwara Temple were being used to build Jesus statue atop the Hill.

‘I am shivering with fear’ says Shivakumar in a sarcastic remark

I am shivering with fear’ was senior Congress leader D.K. Shivakumar’s jest on the rally the HJV and Sangh Parivar held at Kanakapura on Monday.

Stating that anyone can come to Kanakapura and his Dharma was not to stop anyone from coming, Shivakumar said that he had asked his supporters and party workers not to say or do anything.

Pointing out that when the Congress was in power, he had petitioned the Archbishop, following which Christian community members gave five acres of land on Magadi Road for Kempegowda Authority, Shivakumar alleged that the BJP was only doing politics as it thinks that the rally may do some good for their party in Ramanagara district.

Meanwhile, JD(S) Supremo and former PM H.D. Deve Gowda has come down heavily on BJP for its ‘Kanakapura Chalo’ rally taken out on Monday.

Speaking to press persons, Deve Gowda accused BJP of attacking Churches and burning the Bible. Pointing out that India is a secular nation having all religions, he said that he won’t find fault with what Shivakumar wants to do. The Congress leader may have decided to install a Jesus Christ statue atop Kapala Betta and JD(S) don’t have a problem with it, he added.