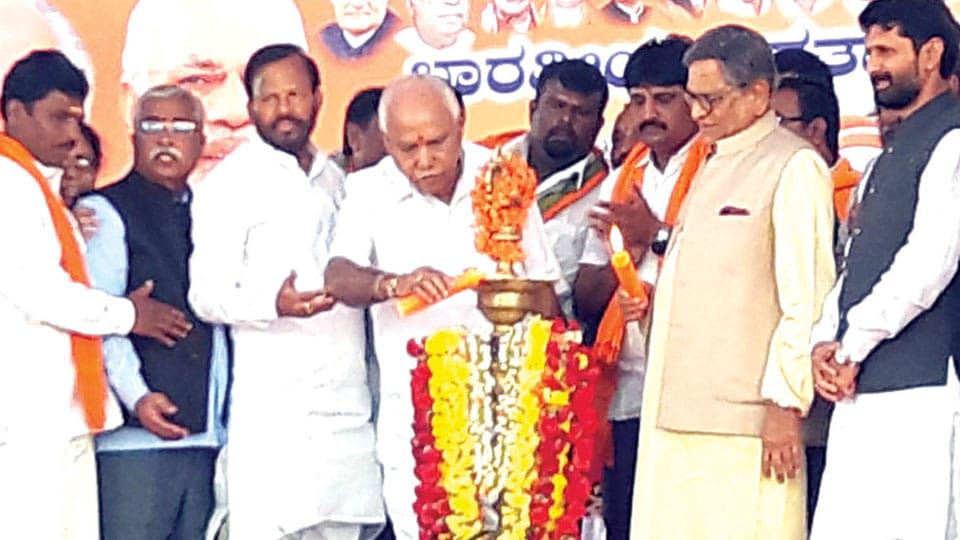 Mandya: BJP State President B.S. Yeddyurappa trained his guns on Chief Minister Siddharamaiah and the Congress Government and, rained assurances of development if BJP comes to power, on the first day of Parivartana Yatra at Silver Jubilee Park in Mandya district yesterday.

The Parivartana Yatra is scheduled to reach Mysuru on Jan.25 during which a public rally has been organised at the Maharaja’s College Grounds.

Speaking after inaugurating the rally in Maddur, he said that if BJP comes to power, it will earmark Rs.1,500 crore for the irrigation projects for Mandya district alone. Singling out Siddharamaiah, Yeddyurappa said that the CM was indulging in “Thuglaq Durbar” and the Congress Government rule in Karnataka will end soon.

BJP has been ruling 19 States in the country and in the next six months, it will be ruling 22 States, including Karnataka. If BJP comes to power in Karnataka, Rs.1 lakh crore would be earmarked for irrigation. Pipes would be laid to release water from Krishna Raja Sagar (KRS) reservoir to Markonahalli Dam, he said.

Targeting the CM, Yeddyurappa said that the law and order situation has worsened in the State. Siddharamaiah has been looting the State’s Treasury. Domestic violence on Dalit women and murders are on the rise. Even the High Court has criticised the State Government. Despite all these, the State Government has not learnt any lesson, he criticised.

BJP State President B.S. Yeddyurappa is seen lighting the lamp during the inauguration of the Convention at Maddur organised as part of Parivartana Yatra yesterday as former External Affairs Minister S.M. Krishna, former Minister C.T. Ravi and others look on.

Prime Minister Narendra Modi has been giving a transparent and clean governance and gained respect from the world community. Only if BJP comes to power in the State, Modi’s hands can be strengthened, he said.

“When BJP was in power, it had announced a special Budget for the farmers. Free power, financial assistance to the milk producers, interest-free loans were implemented. The BJP Government had even waived farmers’ loans twice. But the Siddharamaiah-led Government had cancelled all the schemes and betrayed the farmers,” he alleged.

Yeddyurappa also pointed out various schemes implemented during his tenure including Bhagyalakshmi Scheme, development programmes for the Hindus, Muslims and Christians, which were withdrawn by the Congress Government.

Various schemes pertaining to the development that were withdrawn would be introduced again if BJP comes to power, he assured.

Yeddyurappa and former External Affairs Minister S.M. Krishna were the main attractions during the rally. Yeddyurappa said that he was very happy as Krishna accepted to be the part of the programme.

But overall, the Parivartana Yatra drew a poor response. The turnout was around 1,800 in Maddur and nearly 2,000 in Mandya. The number of attendees was lesser at Nagamangala.

Krishna attended the Yatra at Maddur and skipped the Mandya one. He slammed the Siddharamaiah Government for “failing to develop” the State.

The veteran BJP leader praised Prime Minister Narendra Modi for “making India strong and stable” in terms of development. He said that he could see a great new India emerging under the leadership of Modi.

Former Ministers C.T. Ravi and C.P. Yogeshwar and former MP Tejaswini Ramesh were the prominent leaders who participated in the programme.