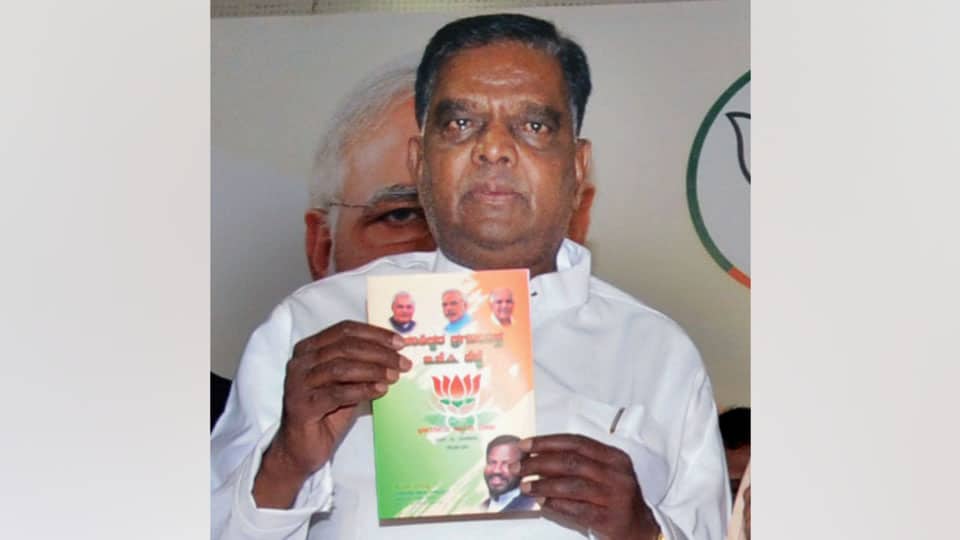 Mysuru:  Hitting back at Congress leaders who had asked him to move the Court in case any irregularities had taken place in last year’s Nanjangud by-poll, senior BJP leader and former Minister V. Sreenivasa Prasad has said that whatever he had written in his book ‘Swabhimaana Rajakaranada Hinnele – Nanjangudu Vidhanasabha Upachunavane-Vishleshane’, explaining the electoral malpractices by the Congress, was true to full extent.

Addressing a press meet at a private hotel here his morning, Prasad said that it appears that Chief Minister Siddharamaiah, Chamarajanagar MP R. Dhruvanarayan and District Minister Dr. H.C. Mahadevappa may have not read the book at all and were simply making wild comments on him.

Maintaining that by writing the book he had gone to the people’s court (Janata Nyayalaya), the BJP leader reiterated that it is the three Congress leaders who should move the Court, if they found it defamatory, and not him.

District Minister Dr. H.C. Mahadevappa, while launching some development works in Nanjangud, had told the Nanjangud bypoll winner Kalale Keshavamurthy that the Government had spent over Rs.100 crore to get him (Kalale) elected, he said and added that Chief Minister Siddharamaiah was taking the escapist route by not replying to the charges made against him (CM) in the book.

Taking a dig at Congress leaders for inaugurating a slew of works just before the announcement of poll schedules, Prasad asserted that the credit for installation of Jayachamarajendra Wadiyar Statue at Hardinge Circle, white marble statue of Dr. B.R. Ambedkar at Town Hall Circle, construction of District office complex, extended building of Maharani’s college etc., should go to him, as all these works were taken up when he (Prasad) was the Revenue and District in Charge Minister.

Accusing CM Siddharamaiah of failing to initiate action against the accused charged with the assault of the then ATI Director General Rashmi Mahesh, Prasad said that the fear of losing in Chamundeshwari segment has gripped Siddharamaiah.

Reacting to the CM being garlanded with 750-kg apples at Hootagalli a couple of days ago, he said that it would be no surprise if Siddharamaiah, who calls himself a Samajwadi, even receives a 7 kg ‘Gold Garland’ in the coming days.

When asked about the BJP’s plans to defeat the CM in Chamundeshwari, Prasad said that such plans cannot be revealed. He however said that the party will field a strong candidate to make it a triangular contest.

Claiming that the CM’s arrogance will pull him down, Prasad said that the CM’s sarcastic remark asking BSY to contest from Chamundeshwari, was not the language expected of a Chief Minister.

Accusing the CM’s close confidants K. Marigowda, Ramaiah and others of meddling in transfers when he was the District Minister, he said that the Home Minister’s advisor Kempaiah’s background was known to all.

When asked whether his son-in-law B. Harshavardhan was an aspirant for the BJP ticket from Nanjangud, Prasad categorically said that he would not lobby for anyone and that he would extensively campaign for any candidate that the party fields.

He also took pot-shots at AICC President Rahul Gandhi’s frequent tours of Karnataka, saying that the Congress leader was only making last-ditch efforts to save the party from defeat in its last major bastion in the country and his (Rahul) tours would go waste as the Congress would bite the dust.