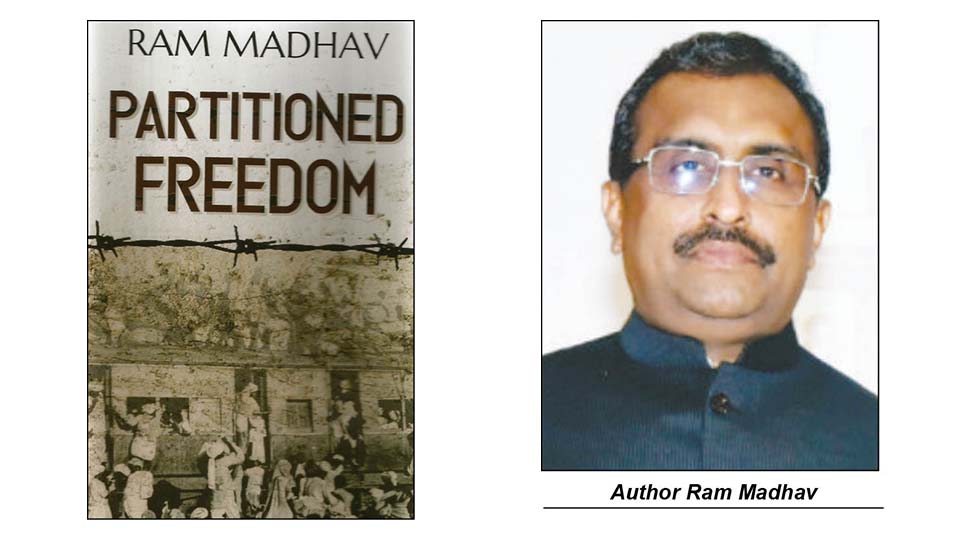 Independence struggle has been substantially dissected, deliberated and detailed during the past 75 years. However, the dogmatic distortions in its narration have only increased the hunger for unravelling the mystery surrounding the incidents and the individuals who fought and struggled for freedom.

Ram Madhav’s book “Partitioned Freedom” is an outcome of author’s strong conviction that “Talking about that (partition) tragedy was considered politically incorrect and anti-secular. It was only after many decades, when the relations between the countries touched their nadir, pushing the world to the brink of nuclear war, did some debate over Partition and its fallacy begin prominently.”  He is of the opinion that however fictitious the Two-Nation-Theory might have been, it has not only divided the territory but also hearts. Therefore, revisiting horrors of the Partition is needed not just as an academic exercise, nor to hate anybody, but to learn appropriate lessons and avoid another Partition.

This book deals with many incidents and individuals responsible for changing the direction of freedom movement that led to the Partition.

The Partition of India, which author feels ‘Nobody Wanted it, But Nobody Stood Up’, was a gruesome event and the rationality of it is being questioned even today. Whether all the efforts of freedom struggle yielded the Independence, or the circumstances forced the British to leave India that resulted in our freedom is still a matter of unending debate. It also raised many questions regarding the fundamental sociological construct of the land. Author has dealt in great details the events  leading to and post 1857 revolt, which he prefers to call as First War of Independence and strongly decries calling it a Sepoy Mutiny. These events led not only to the emergence of Islamic political ambitions but also created a deep rift within the freedom struggle. A country which had undergone two major colonial dominance over a millennia was confronted with a wide communal divide within few years of fight for political independence. The consequence was a Partitioned Freedom.

Division of Bengal -A Precursor

The intention of the British in dividing Bengal was to suppress the freedom movement led by the Indian National Congress, centred around capital Calcutta and Bengal Province. Even though the plan boomeranged by further intensifying the independence effort, it yielded unexpected gift to the colonial rulers in the form of consolidation of Islamic movement and the formation of Muslim League. This, in turn, provided the British an opportunity to invent and successfully implement Divide and Rule policy. All the events that took place thereafter were leading towards a Partition of the country.

Author has dealt with the issue of Hindu-Muslim Unity and the turn of events during the freedom movement in great detail. Jinnah was a London-graduated barrister and an associate of Gokhale. He had joined the Congress in 1906 and had become Secretary of Congress stalwart, Dadabhai Naoroji. He had opposed the Partition of Bengal, describing it as “the obnoxious virus introduced into body politic of India with evil design.” He had opposed the provision of separate electorates under the Minto-Morley Reforms in 1909, arguing that they reduced Indian politics into ‘two watertight compartments.’ And in 1913, Jinnah even told the Islington Committee on administrative reforms that “I do not see why a Hindu should not be in charge of a district where the majority happens to be Mohemmedan.”

READ ALSO  The book I read in the US: The Maharaja and the Princely States of India

Therefore, by the time of Gandhi joining the Congress, Jinnah  was already a tall Muslim leader in the party. Both Jinnah and Gandhi had a common nativity and language — Gujarati, but belonged to two different religions. However, the rift between the two and Gandhi’s preference to Ali Brothers, despite their changing positions, had grave consequences. Jinnah, an ambassador of Hindu-Muslim Unity turned into a successful ‘Champion of Partition.’ He very ingeniously used the Khilafat issue as not only a clash within Europe, but a clash between the Cross and the Crescent, to consolidate the Islamists within the country and to arm-twist the British on the one hand and the Congress on the other to yield to their demands.

Author states that “… in its competitive bargaining for Muslim League’s support, the Congress leadership gave up on those sane and secular Muslim leaders and leaned more and more on the communal and fundamentalist elements in the community.” The consequence was the Partition of the country.

Gandhi’s strong belief in the communal harmony were rooted in his success during his South Africa days. This success also crowned him with sobriquet of ‘Mahatma’ which accompanied him to India. However, while glorifying Gandhi’s South Africa success, legal as well as socio-political, the fact that both Hindu and Muslim there were a very small communities in a larger demography cannot be overlooked. Gandhi’s steadfast belief and insistence on communal harmony in a very large country that India was, with its long colonial history led to disastrous consequences and raise many theoretical questions.

Author provides several instances where Gandhi’s blind faith in unity only further divided the two communities. When Maulana Mohemmed Ali, whom Gandhi preferred over then secular Jinnah, had stated that ‘an adulterous Mussalman is superior to Mahatma Gandhi’ enraged Hindus, Gandhi simply explained the statement away. Gandhi called the rebellious and murderous Moplas as ‘human’ but categorised the conduct of Hindu Chauri Chaura protestors as ‘inhuman.’

To prevent any outrage against Muslims in case of his death during fast, he ensured that regular Quran recital were arranged during his fasts. To placate feelings of Muslims, Gandhi modified Hindu bhajan ‘Raghupati Raghava Rajaram’ to add ‘Ishwar-Allah Tere Naam.’ Vande Matarm, which was a clarion call for a unified Bengal in 1905 and later on became the National song, was truncated to only first two stanzas in 1937 under pressure from the Muslim League and finally was replaced by Mohammad Iqbal’s song ‘Saare Jahan Se Accha- Hindustan Hamara.’ Ironically,  the poet who wrote these lines preferred to live in Pakistan!

Could Partition be Averted?

As late as in 1944, Lord Wavell, the Viceroy had stated “India is a God-made triangle; you cannot divide it.” But within three years India was partitioned between India and Pakistan.

Therefore,  author Ram Madhav ponders that Bengal’s Partition was announced in 1904 but annulled seven years later, in 1911. India’s partition was demanded in 1940 and executed seven years later, in 1947. If Congress had launched Vande Mataram Movement to oppose Partition of Bengal in 1905, it announced Quit India Movement to oppose India’s Partition in 1943. The Vande Mataram Movement was a grand success. It forced the British monarch to come down to India in order to declare Partition null and void. But Quit India Movement, after having picked up a nationwide momentum, soon fizzled out. Gandhi himself admitted that “Quit India Movement had lapsed’.

Author ponders: Could the last seven years before partition be any different (from the seven years of 1904-11)? Could Jinnah be weakened? And could Partition have been averted?

Lessons from the Partition

The vivisection of Pakistan and the emergence of Bangladesh in 1971 throw up larger question for India. Author feels that now “It is not just about the hypothesis whether it (India’s Partition) could have been prevented. It is about whether another Partition can knock at India’s doors and how such a calamity can be prevented.” Acknowledgement by the Indian Government, for the first time in 2021, that the horrors of partition must be revisited in order to learn lessons from it.

Author ponders “Can the legacy of Partition in the form of the division of hearts between Hindus and Muslims end? Can they live together as one Nation? Or Jinnah’s ghost will continue to haunt us forever?”

After nearly seven decades after Independence,  a great political transition is taking place in the country and there is realignment of value system. This heralds emergence of a new India which wants to see history devoid of dogmas. Ram Madhav’s book exposes several chinks in our freedom history and poses several fundamental questions. Therefore, it is a valuable addition to such a re-evaluation of events and individuals leading to the Partition of the country in our fight for freedom.

The book is very informative and provokes the readers to question the prevalent narratives about Partition of the country.

This book has meaningfully titled eleven chapters, authenticated by chapter-wise references, two annexures and supported by scientifically presented index. It is reasonably priced for its rich contents.

NOTE: Even after Partition on the basis of two major religions, the apparition of the ghost of Partition seems to haunt both Pakistan and India. Any number of books on this theme may not help. Only a strong, Nationalist leadership can. — Ed

2 COMMENTS ON THIS POST To “Book Talk: Looking Back on Independence Saga”