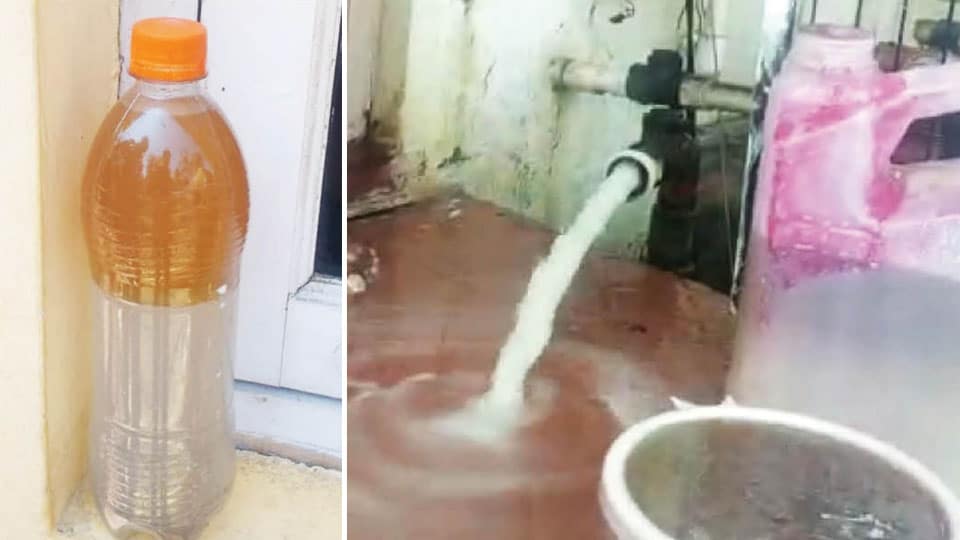 Mysuru/Mysore: Occupants of a housing complex in Siddalingapura are facing a unique and potentially dangerous problem. Water from a borewell here can not be used for drinking or other purposes as it smells like petrol.

It’s yellowish in colour and has an unpleasant taste. The problem is so acute that the residents have stopped using borewell water and are dependent on other sources. They have even switched to bottled water.

The housing complex belongs to one Prakash from Bengaluru who had purchased a plot in Siddalingapura on the Mysuru-Bengaluru Highway and had built four houses in two storeys. He had given them on rent and had even sunk a borewell for drinking water five years ago.

Residents suspect groundwater has been contaminated by fuel leaking from a petrol bunk nearby. Petrol-mixed water was noticed some days ago and the fuel smell in the water is increasing day by day, said the occupants of the houses.

When the water is poured to the ground on dry vegetation and lit with a match stick, it catches fire. “We suspect that there is a leak from the storage tanks of the petrol pump and we have informed the owner,” residents said. Initially, the residents were confused and were unable to find the root cause  of the problem.

Seeing smelly water flowing from their taps and smelling the same water in food prepared, residents got their sump cleaned. Still, the smell persisted and increased by the day. “That’s when we suspected something is wrong. When we poured the water into a plastic bottle, the petrol content collected on top while the water collected below as the density of petrol is lighter when compared to water,” residents said.

House owner Prakash said that since five years, the borewell was giving pure water and only recently, his tenants complained of water reeking of petrol. “The petrol bunk owner too visited the place and checked the stocks. He told us that he did not find any discrepancies between his stock and sale. We will inform the authorities from Karnataka State Pollution Control Board and Siddalingapura Gram Panchayat,” he said.