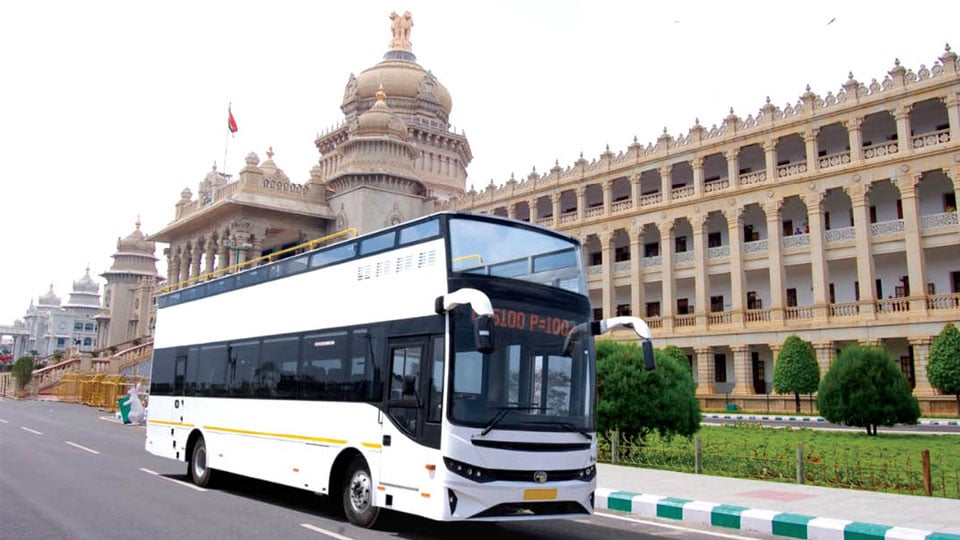 Mysuru/Mysore: In a bid to develop and promote tourism, Karnataka State Tourism Development Corporation (KSTDC) has decided to operate double decker bus services in Mysuru and Hampi. The buses will be launched on the lines of London’s ‘Big Bus’ model.

The first of these buses is likely to be operated in Mysuru by March-end and the trial run will begin as early as next week with one bus that is getting its finishing touches in Bengaluru.

Confirming this to Star of Mysore this morning, KSTDC Managing Director Kumar Pushkar said that the Corporation was introducing six double decker buses in Mysuru and Hampi for sightseeing.

Chamundi Hill will be excluded as the duration of the bus tour is one-and-a-half-hours and also it may not be feasible to manoeuvre the bus on the curves of the Hill, he explained.

The bus will take tourists around the heritage sites and if the tourists want to see the interiors of a place, Mysore Palace for example, they can go there but take a different bus to other destinations as the bus which had taken them first will not wait for their arrival from the Palace. As there are four buses every 20 minutes in the heritage circuit, this arrangement can be made, Kumar Pushkar added.

Former Chief Minister H.D. Kumaraswamy had allocated Rs. 5 crore for KSTDC to launch these buses in Mysuru and Hampi and in July 2019, KSTDC floated a tender for fabrication of six double-decker buses on Eicher vehicle chassis, he said.

“Manufacturing and fabrication of one prototype bus has been completed and workers are giving finishing touches. The bus is likely to arrive in Mysuru during the end of February or the first week of March and we will commence operation by the end of March,” he said. The bus will be named ‘Ambari’ and of the six buses, four buses are meant for Mysuru and two for Hampi, he added.

Each bus will have a seating capacity of 40 (20 seats each in upper and lower deck).

Of the six, four are meant for Mysuru and two for Hampi. One prototype bus has already been fabricated and is ready. The other five are expected to be ready by March-end. Trial runs will begin from March 10 to finalise the route as well as audio-video contents to be displayed along the tour, he disclosed.

For summer season, the KSTDC plans to deploy all the six buses in Mysuru itself as tourists in Hampi may not be using them due to soaring temperature. The lower deck of the buses will be air-conditioned, while the upper level will be open-roofed, Pushkar added.

The International Centre for Automotive Technology team has completed inspection of the bus in the first week of February and the KSTDC is awaiting their certification. Officials will also apply to the Transport Department for vehicle registration.