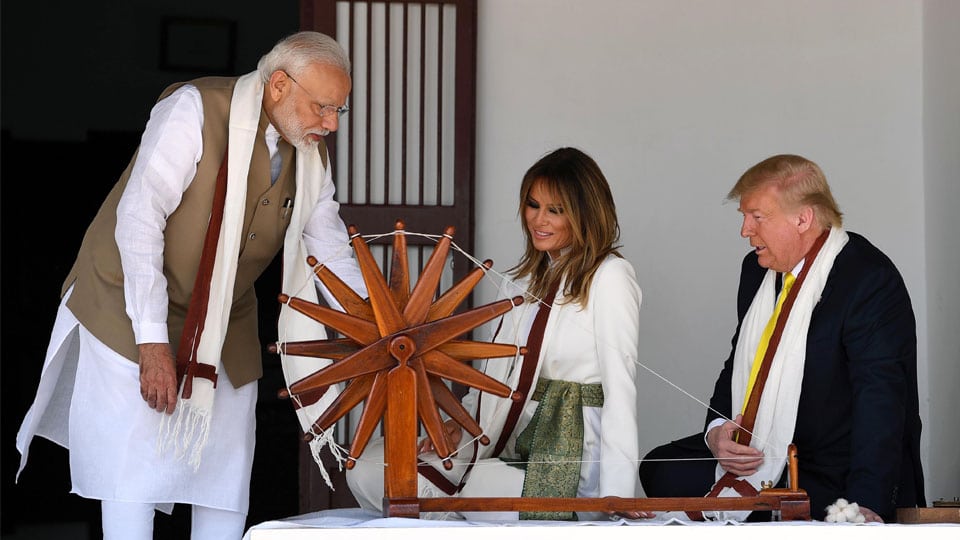 * US First Family to visit Taj Mahal during two-day tour

Ahmedabad: US President Donald Trump was greeted by Prime Minister Narendra Modi with a warm hug as he and First Lady Melania Trump arrived in Ahmedabad in ‘Air Force One’ this morning for a 36-hour visit to India.

Gujarat Governor Acharya Devvrat and Chief Minister Vijay Rupani were also present at the airport. Colourful pageantry greeted President Trump as he travelled in the armoured black car known as the “Beast” on the streets of Ahmedabad.

They went to Sabarmati Ashram before reaching the largest cricket

stadium in Motera. The stadium which has a capacity of over one lakh filled up hours before the event.

Modi escorted Trump and Melania to their official vehicle and the motorcade meandered its way through the airport and on to the roads in Ahmedabad. The two-day State visit comes ahead of President Trump’s re-election bid — the US votes in November — and just months after PM Modi’s “Howdy, Modi!” event in  Texas last year. Trump’s visit also comes amid tense trade talks between the two countries.

At the Sabarmati Ashram, Donald Trump and First Lady Melania Trump tried their hand at spinning the charakha. The spinning wheel, associated with Mahatma Gandhiji’s freedom movement and campaign for self-reliance, is one of India’s most recognisable symbols.

PM Modi was seen showing around the Trumps at the Ashram and telling them about the charakha. The couple together garlanded an image of Mahatma at the Ashram. Trump signed the visitor’s book at the Ashram with a message to “my great friend Prime Minister Modi” but did not mention Mahatma Gandhi.

Just before he landed in Ahmedabad for his first-ever visit to India, President Trump had tweeted in Hindi: “We are eager to visit India. We are on our way, will see you all in a few hours.” PM Modi responded: “Atithi Devo Bhava (guest is god)”.

Festivity was in air as dancers and music troupes were lined up at the tarmac to accord a colourful welcome to the US President accompanied by his daughter Ivanka, son-in-law Jared Kushner, both senior advisors, and a 12-member high-level official delegation.

From Ahmedabad, Donald Trump and his family will travel to Agra to visit the Taj Mahal, which has been treated to several rounds of beautification with the help of mud packs; this too has been described as something that had already been planned. Authorities have released vast volumes of water into the Yamuna River, which flows along the Taj Mahal, in order to lessen the usual whiff of raw sewage and industrial effluent. Trump and his family will fly to Delhi this evening for the operative part of the trip, which includes high-level talks tomorrow. An Indo-US trade deal is likely to be discussed.

Over 14,000 security personnel have been deployed for the two events. Home Minister Amit Shah, who is also the President of the Gujarat Cricket Association (GCA), that owns the Motera Stadium, would be present during the Namaste Trump event.

Several performances would  be given by reputed artistes including Sufi singer Kailash Kher and Gujarati folk singer Kinjal Dave. During the road shows, artistes and cultural troupes have been stationed to give the glimpses of India’s diverse culture from 28 stages erected en route to represent all the States of the country.

The US delegation was served high tea featuring Gujarati delicacy ‘Khaman’, broccoli and corn samosa, apple pie and Kaju Katli during their 15-minute stay at the ‘Hriday Kunj’, where Mahatma Gandhi stayed for 13 years and also took the famous pledge at the beginning of the Dandi March.