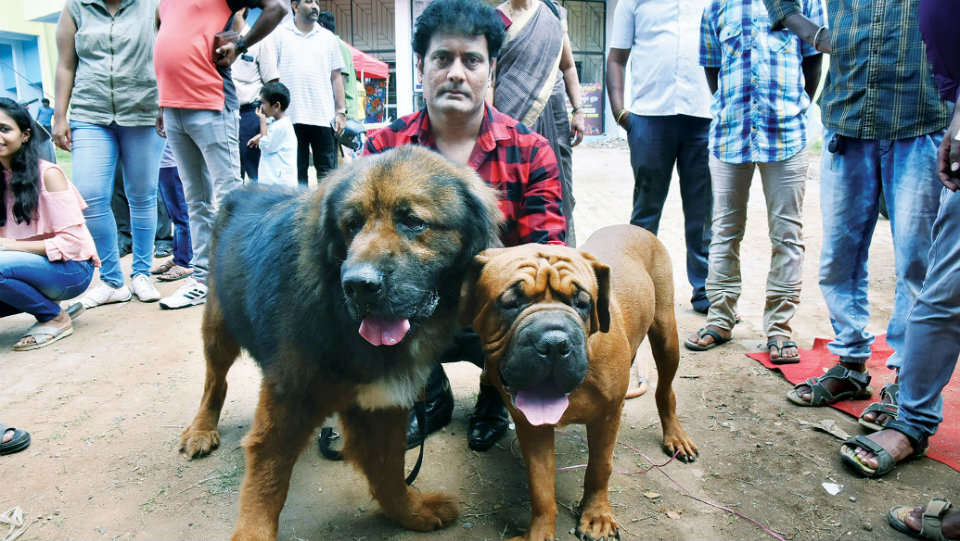 Mysuru: Two breeds — Korean Dosa Mastiff, worth Rs. 1 crore and Lion Head Tibetan Terrier Mastiff, worth a mind-boggling Rs. 10 crore — were the cynosure of all eyes at the National-level Dog Show in city this morning. The breeds are owned by Bengaluru-based dog breeder S. Satish. The show was organised by Canine Club of Mysore at Chamundi Vihar Indoor Stadium at Nazarbad.

Korean Dosa Mastiff has heavy wrinkled skin with hanging jowls and a blunt nose. These uncommon features in a dog make this one very expensive. Even with a flat nose, the dog can smell things from distance. The exotic breed flew from China.

Tibetan mastiffs are huge, ferocious dogs traditionally kept by Tibetan nomads to watch over their animals and guard their tents while nomads followed their herds of yaks, sheep and goats. The Tibet countryside is filled with them. They are generally kept on chains during the day and released at night to protect herds from wolves and snow leopards.

The breeding and selling of pedigree dogs is big business and Satish, who imported these dogs, says he is also a genuine dog-lover. The Korean Dosa Mastiff grows very big — around 70 kg as an adult — and is known to be a docile and friendly dog, that likes having people around. Satish has over 150 rare breeds at his farmhouse in Kumbalgodu near Bengaluru.

At the dog show, there were over 250 entries with 36 breeds such as desi breeds Mudhol and Rajapalyam, other breeds such as Great Dane, German Shepherd, Doberman, Miniature Pinscher, Saint Bernard, Golden Retriever, Pug and Lhasa Apso. The show was inaugurated by MLA L. Nagendra.

Judges T. Preetham from Bengaluru and K.K. Trivedi from Lucknow adjudged the dogs under various categories such as 4 to 6 months (Minor Puppy), 7 to 12 months (Puppy), 13 to 18 months (Junior), 19 to 36 months (Intermediate), Bred in India (irrespective of age), Open Class, Champion Class and Class.

Only micro-chipped dogs were allowed to take part in the competition, which was a prerequisite from the organisers. As some of the breeds could not withstand the heat, the owners of such pedigrees had kept their dogs in their cars and had switched on the air conditioner. Ice cubes were also placed inside the bowls for these dogs to quench their thirst.

Various companies, selling dog foods, belts, collars and other accessories, had set up their stalls at the venue. The competition venue witnessed a huge rush with dog lovers thronging the venue to witness the competition and to see various exotic dog breeds. Girls were seen clicking selfies with dogs.

Canine Club of Mysore President B.P. Manjunath said that the prize distribution ceremony will be held at about 8 pm tonight during which trophies would be present to the winning dogs in Best in Show Line and winners in various categories.

Prizes will also be given to the Best Handler and Junior Handler by the dignitaries.