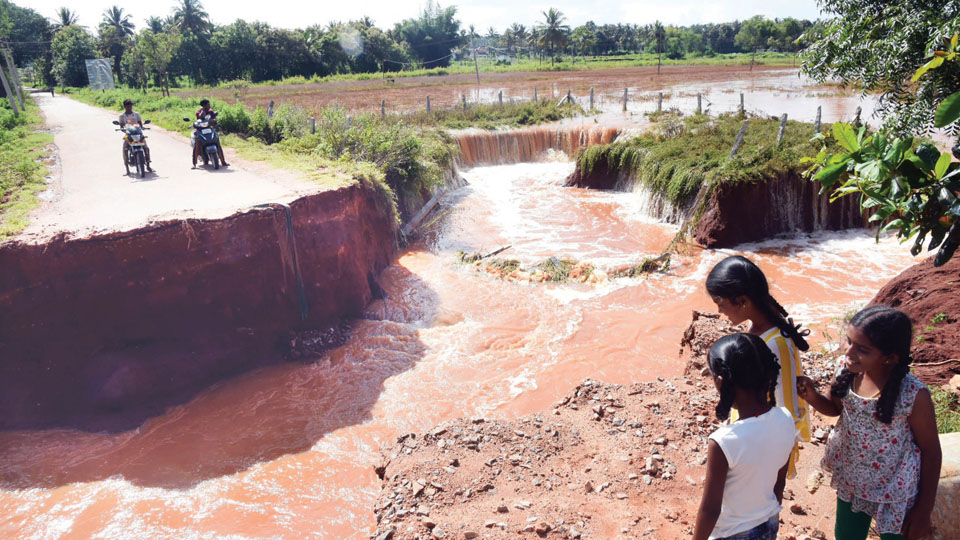 Mysore/Mysuru: While torrential rains have spread mayhem in the IT City of Bengaluru where people are moving out of their marooned posh houses and villas in inflatable boats and tractors, the situation is no different in Mysuru’s Chamundeshwari Constituency where breached lakes are unleashing havoc.

The rain that lashed on the night of Sunday has caused many lakes to overflow and water has entered residential pockets, farmhouses and secluded houses in the Constituency. Roads have been washed away and the only link between certain villages has been cut off.

Poultry farms have come under water resulting in the death of thousands of birds. The marooning is the result of excess rain, encroachment of the Dewan Poornaiah Canal and also due to construction activities that have blocked the natural flow of water between the lakes through Raja Kaluves.

Chamundeshwari MLA G.T. Devegowda visited the affected areas and assured the people of immediate help and also compensation from the Government. The damage is widespread as it has rained in most of the Constituency and the worst affected places are Manikyapura and K. Hemmanahalli where residents are unable to even shift the ailing senior citizens to hospitals.

Water has entered residential pockets as the Sahukarhundi Lake has been breached along with Huyilalu Lake and Mooganahundi Lakes. Connecting roads have been washed away and the fertilisers that were stored to be sprinkled on the fields have been destroyed and turned soggy.

Visiting the areas last evening, MLA G.T. Devegowda spoke to Mrithyunjaya, Secretary, Minor Irrigation Department over the phone and the latter told him that due to heavy rain and rampant encroachment, the water has entered into layouts and farmlands.

He told the MLA that Bommanahalli Lake, Huyilalu Lake, Jattihundi Lake, Chikka Kere and Sahukarhundi Lake have breached due to heavy rainfall and as the canals and Raja Kaluves have been encroached upon, there is no natural outlet to water.