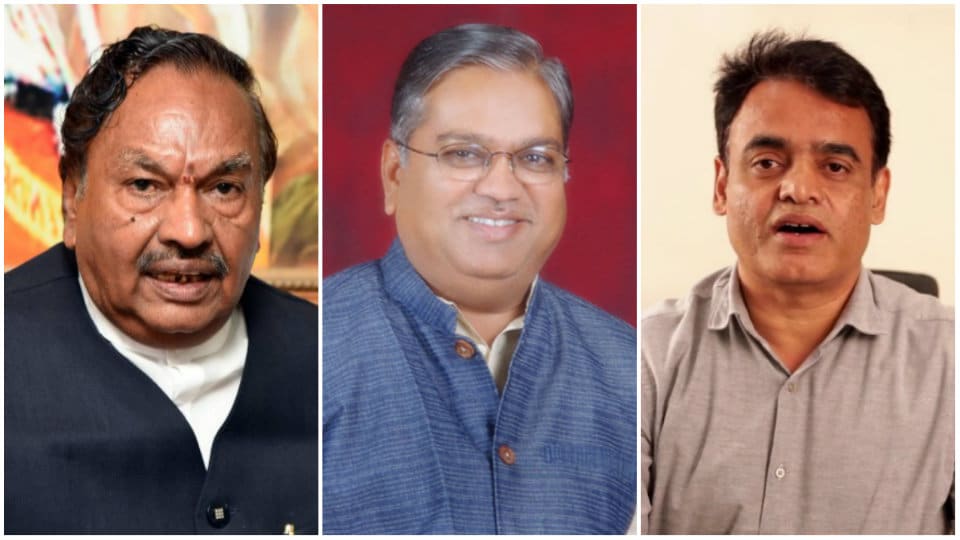 BSY to have not One, not Two, but Three Dy.CMs?

Even as the issue of disqualified Legislators, Cabinet expansion and portfolio allocation are getting more challenging for the CM, who completes one month in Office on Aug. 26 (he took oath as CM on July 26), the BJP High Command’s proposal has come as a shocker for BSY, who is opposed to any such idea, according to sources.

While Yediyurappa is said to be totally disinclined to have Deputy CMs on caste lines, the BJP top brass is said to be mulling on having three Deputy CMs with strong RSS background for Karnataka — with representation to three prominent communities of the State (Vokkaligas, Kurubas and Dalits).

The BJP High Command’s proposal is said to be based on the recommendation of senior Party functionary from the State B.L. Santosh, who was recently appointed as BJP National General Secretary.

Santosh is said to have proposed the names of Dr. C.N. Ashwath Narayan (Malleswaram), a Vokkaliga leader, K.S. Eshwarappa (Shivamogga City), a Kuruba leader and Govind Karjol (Mudhol), a Dalit leader as Deputy CMs. Incidentally, all three are functioning as Ministers after they were inducted on Aug. 20.

With the Party top brass having reportedly made the proposal, CM Yediyurappa is said to have summoned Party Legislators representing Bengaluru to discuss the issue with them, as the Party has preferred Dr. Ashwath Narayan over R. Ashoka, a seasoned politician, who had served as Deputy CM in the Jagadish Shettar led BJP Government earlier. While Eshwarappa had served as Deputy CM under Shettar, Dr. Ashwath Narayan is a first-time Minister.

It may be mentioned here that Andhra CM Y.S. Jaganmohan Reddy, soon after coming to power in May this year, had announced five Deputy Chief Ministers in an unprecedented move and accordingly one each from SC, ST, BC, Kapu and Minority Community were made Deputy CMs.

Katti, Limbavali to be inducted next week?

Yediyurappa, who is grappling with discontent after the Council of Ministers was formed with the induction of 17 Legislators on Aug. 20, is said to have decided to induct disgruntled Party Legislators Umesh Katti and Aravind Limbavali in a minor Cabinet expansion that may take place anytime next week, it is learnt. While Umesh Katti is a  Lingayat, Aravind Limbavali is from Bovi community.

In an interesting development, Umesh Katti, who was reportedly outraged over his omission from the Cabinet, met the CM at the latter’s Dollar’s Colony residence and held talks with him for some time.

After failing to find a Cabinet berth on Aug. 20, Umesh Katti has been fuming at the inclusion of Laxman Savadi, who is neither a Member of the Assembly nor Council.  Aravind Limbavali, who too was said to be deeply disappointed over his omission, is said to have left for New Delhi last night after a call from the Party top brass.