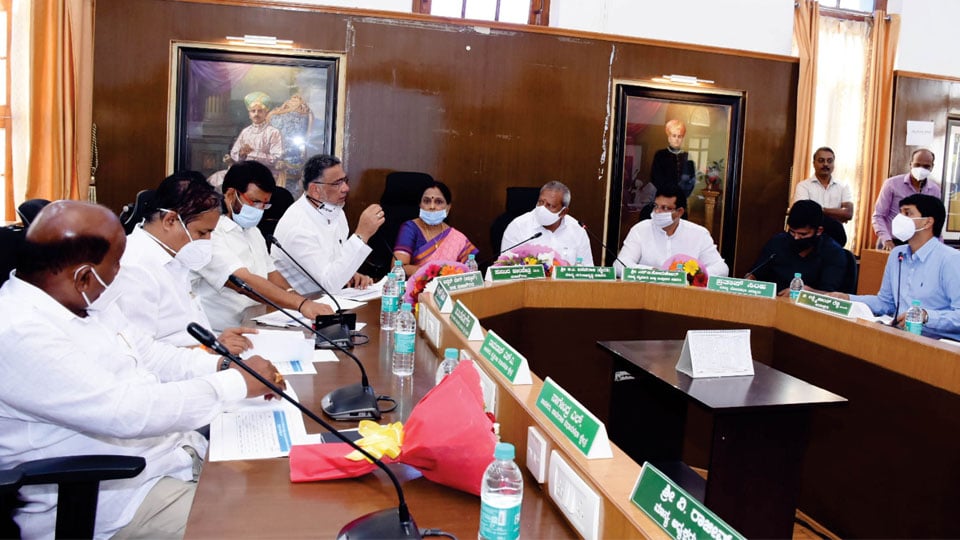 Mysore/Mysuru: Urban Development Minister Byrathi Basavaraj has assured that fund allocation will be made in the forthcoming State Budget for the re-construction of Lansdowne and Devaraja Market buildings in the heart of the city.

The Minister was replying to MLA L. Nagendra and former Mayor Ayub Khan, who had brought the matter to the notice of the Minister saying that the MCC had passed a resolution on demolishing the two heritage structures and constructing a new one while retaining all their heritage characteristics and aesthetics.

They also told the Minister that the matter has remained in limbo for years as a team of experts and a task force team have given conflicting reports on demolition of the two structures.

They urged the Minister to take a firm stand on the issue.

After hearing the MLA and other elected representatives, Byrathi Basavaraju merely said that budgetary allocation will be made in respect of the over century old two structures.

The Minister, however, did not clarify whether the buildings will be demolished and reconstructed or retained with repairs and renovation.

Referring to streetlight problems on the ring road, the Minister opined that both the MCC and MUDA should jointly take up repair or replacement of cables, which is estimated to cost Rs. 5.5 crore. The Minister also assured that the original expenditure will be modified if the ring road needed high-voltage bulbs in place of LED bulbs.