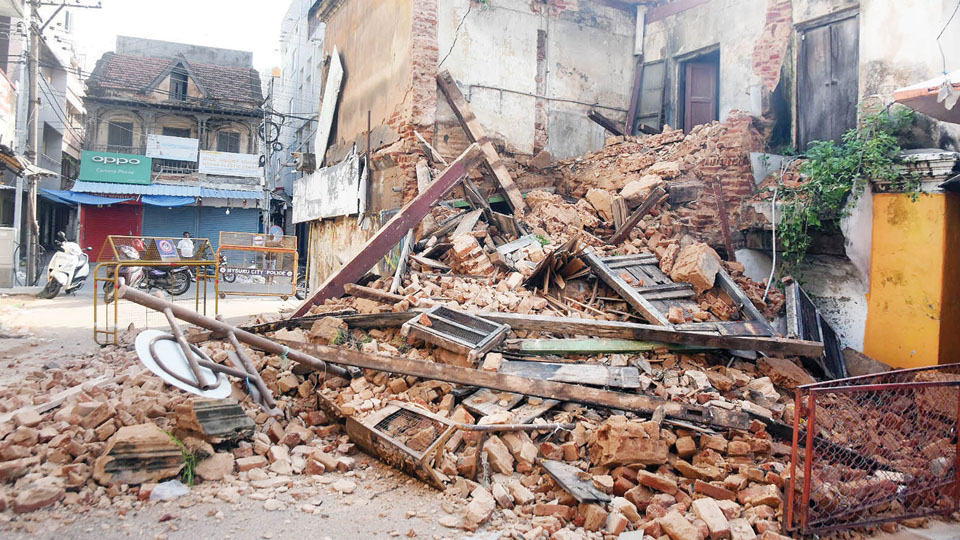 New survey of weak buildings on cards; Similar surveys were done in 2019, 2021

Mysore/Mysuru: Every time a dilapidated building collapses, the authorities of Mysuru City Corporation (MCC) and the Mysuru Urban Development Authority (MUDA) wake up and decide to conduct a survey to identify weak structures and issue notices to the owners that they will be held responsible for loss of life and limb. And after some days when the issue dies down, the survey idea is put on the back burner.

After a dilapidated structure that came crashing down on the road between D. Devaraj Urs Road and Shivarampet in the wee hours of today, the authorities came up with the ready answer — a survey of dilapidated buildings will be conducted and notices will be issued.

Fortunately, the building collapsed at 2.34 am today and there was not a soul or a vehicle on the road. The building on Pandit Jayaram Road adjacent to Tripurabhairavi Mutt, collapsed and the CCTV footage of the camera went viral today. The stretch has been barricaded now.

The CCTV camera was installed at the shop in the opposite lane and the video shows the collapsing frame by frame. The building was dilapidated for many years and it was left to collapse on its own. The area usually is filled with people from early morning till late at night as it is a prime trade hub.

Speaking to Star of Mysore, MUDA Commissioner G.T. Dinesh said that the buildings and properties come under MUDA and MCC. “We will conduct a survey of dilapidated buildings and tell the owners that they will be responsible for any accidents or in case of deaths. They will have to bear the costs. There are over 200 such buildings within the city limits,” he said.

It may be recalled here that in October last year, the MCC began a survey of weak commercial and residential buildings within city limits and under its nine Zones. This was after the collapse of a house at Ittigegud (Indiranagar) on the evening of Oct. 11. Following heavy rains, a portion of the house on Periyathambi Road collapsed trapping three elderly women who were rescued later.

Even in 2019, a survey was commissioned to identify heritage as well as dilapidated buildings. At that time 25 buildings in the city were classified as dangerous and 50 of them were classified as unfit for residential purposes and needed to be demolished immediately. But no action was taken.

This morning, Chamaraja MLA L. Nagendra visited the spot along with MCC officials and asked them to demolish dilapidated buildings. “Even earlier, I had asked the officers to take action on these structures before any accident but nothing was done,” he said.