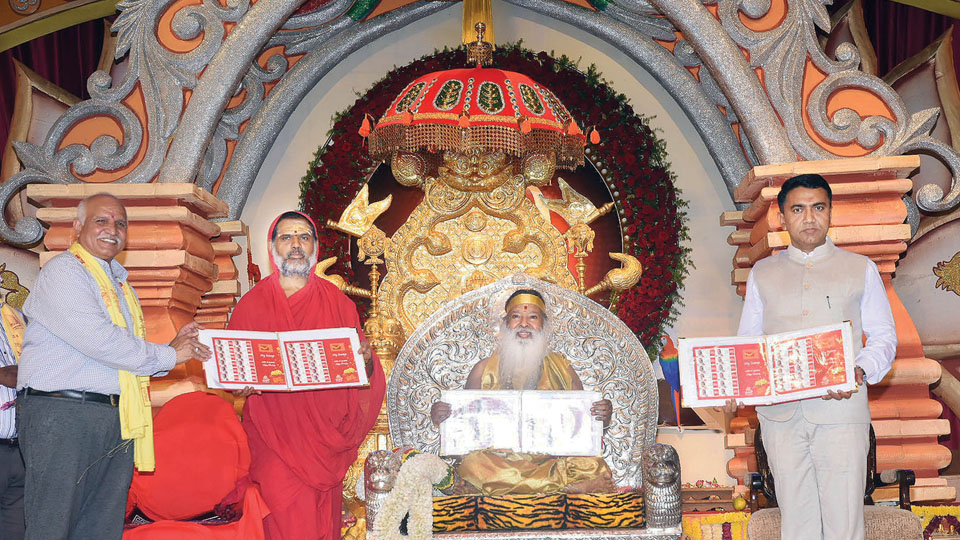 Devotees from across the globe are converging on the  Avadhoota Datta Peetham to take part in the 10-day 80th birthday celebrations of the Swamiji that began on May 22.

Goa Chief Minister Pramod Sawant released a Stamp containing the picture of Sri Ganapathy Sachchidananda Swamiji and an Envelope that contained the picture of the Swamiji on one side and of Lord Sri Rama on the other side, brought out by the Postal Department marking Sri Ganapathy Swamiji’s 80th birthday celebrations.

Speaking on the occasion, Goa CM Pramod Sawant said that he was very blessed to be here on the auspicious occasion of the 80th birthday celebrations of Sri Ganapathy Sachchidananda Swamiji.

Maintaining that the Swamiji has dedicated his entire life to Sri Datta Aradhana, he said that he was fortunate to have come from the land known for Datta Temple at Sankhali in the Assembly Constituency that he represents.

Pointing out that he has come from the land of Gomantak, which has produced many maestros of Sashtriya Sangeetha, the Goa CM said that with the blessings of the Swamiji, he will work to promote this culturally and spiritually rich identity of Goa.

Noting that the Swamiji started ‘Shuka Vana’ in Mysuru, which is India’s largest aviary which houses more than 3,000 parrots, he said that Guinness World Record was given to this aviary for the world’s largest collection of parrots in a single aviary.

“The Ashram in Mysuru is a wondrous spiritual place where temples, aviary, India’s largest Bonsai Garden, Veda Pathashala and one of India’s finest auditorium ‘Nada Mantapa’ are here. The Swamiji runs several Veda Pathashalas and Shastra Pathashalas where hundreds of students have studied the sacred Vedas and Shastras in Gurukul system for 18 years. It is important to note that many of them are acclaimed Vedic scholars today,” Sawant said adding that many renowned musicians from India have given concerts at Nada Mantapa.

“We are blessed to have the Swamiji with us whose work on protection of environment and establishment of ‘Shuka Vana’, is very divine and will help the coming generations in sustainability. The Swamiji is also renowned for his Healing and Meditation Music and he is considered a divine guide who promotes the ancient Vedic  traditions,” he asserted, while also observing that the Swamiji’s beautiful Keertanas, Vedic Pujas and Havanas brought Vedic scholars to the Ashram.

“It is indeed great that the Swamiji has established 85 Ashrams extending from the Northern part of the country to the Southern part. All these Ashrams have Datta Temple for worship, daily Annadan (mass feeding) for pilgrims and a free medical clinic for those in need. This apart, he has built a 85 ft. tall Hanuman in Trinidad, West Indies, which is the tallest Hindu deity in the western hemisphere. The Swamiji’s interest in music and its healing qualities led him to conduct music concerts for meditation and healing across the globe,” the Goa Chief Minister said.

“The ten-day spiritual celebrations now is a melting pot of Indian Cultures, Music, Art, Minds, Rituals and Happiness,” he said adding that he shall request the Swamiji to visit Datta Temples of Goa and bless Goa by his visit. Sawant further said that he will seek the blessings of the Swamiji in our efforts to enrich the cultural legacy of Goa.

Sri Ganapathy Swamiji in his ‘Anugraha Bhashana’ (benedictory address), said that Gurudatta Deva is the ‘Guru’ for the entire population. Maintaining that he himself is a staunch devotee of Dattatreya, he said that worshipping Dattatreya will lead to happiness in life.

Noting that he was happy that Goa Chief Minister Pramod Sawant has come here for the birthday celebration, he blessed Sawant and all others with prosperity, well-being and happiness.

The virtual speech delivered by Prime Minister Narendra Modi wishing the Swamiji  on the inaugural day of the ten-day celebration on May 22 was re-telecast. The Ashram’s Junior Pontiff performed ‘Pada Puja’ of Sri Ganapathy Swamiji on the occasion.

Former Mayor Sandesh Swamy and a few other political leaders attended the event.

Earlier in the morning, Sri Chakra Puja and Ayushya Homa were performed. Today’s programme also features a ‘Guru Gita Parayana’ by devotees and Sand Art by Nitish Bharti later in the evening (6.30 pm).

The ten-day celebrations will conclude on May 31.