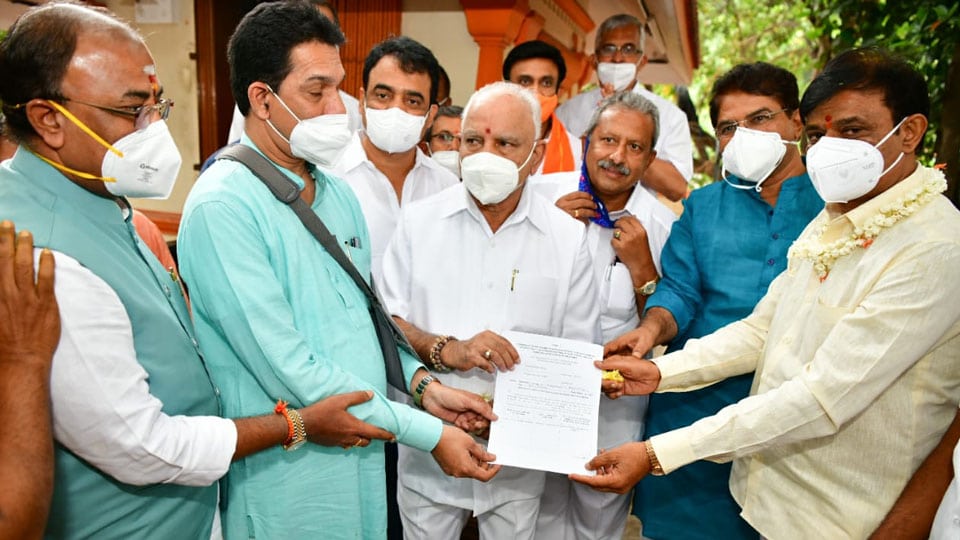 Bengaluru: Ending days of speculation, the BJP on Tuesday evening announced the names of its candidates for the bypolls from R.R.Nagar and Sira Assembly segments.

Following the announcement of his candidature, Muniratna filed his nomination papers at Bengaluru this morning.

Bypolls for both the Constituencies will take place on Nov.3.

While the bypolls for R.R. Nagar Assembly was necessitated by the resignation of Muniratna, the bypolls for Sira is taking place following the demise of sitting MLA B.Sathyanarayana (JD-S).

While Muniratna is an old war horse, Dr. Rajesh Gowda, who is the son of former Congress MP from Chitradurga C.P. Moodalagiriyappa, is a new entrant to the BJP, who had joined the party only a few days ago with an expectation of getting the party ticket.

Meanwhile, the JD(S) too announced on Tuesday that it was fielding Krishnamurthy, a party leader from Jnanabharathi area in Bengaluru, from R.R. Nagar.

The Congress had announced the party candidates much earlier for both Constituencies, by naming H. Kusuma for R.R.Nagar and former Minister T.B.Jayachnadra for Sira.

Taking a lead over her rivals,  Kusuma, wife of deceased IAS officer D.K.Ravi and daughter of political leader Hanumantharayappa, filed her nomination as the Congress candidate from R.R.Nagar segment on Tuesday. She is expected to file her second set of nomination papers today.