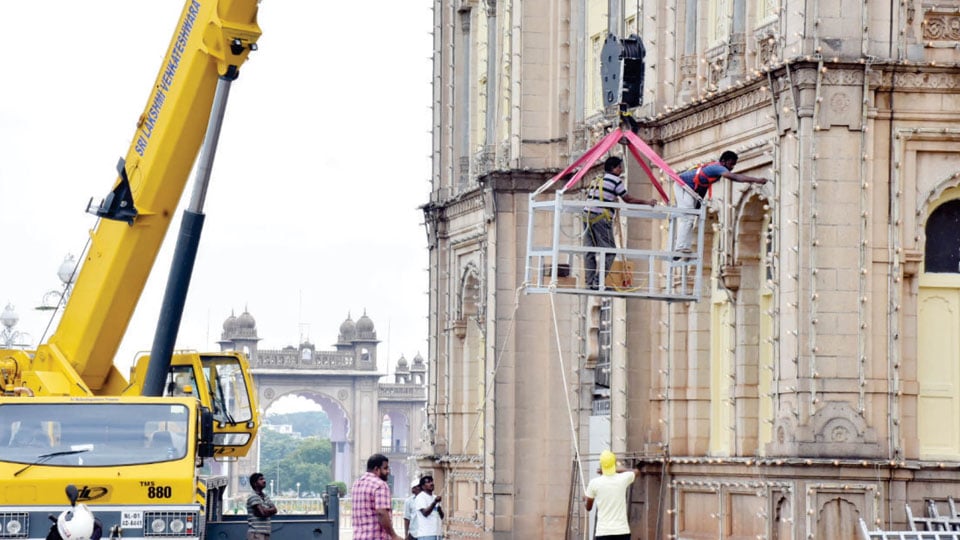 Mysore/Mysuru: With no let up in Corona positive cases and casualties in Mysuru city and district, the Royal family of Wadiyars has planned to make certain changes in its rituals to be observed inside the Palace as part of Sharannavarathri.

Already, Pramoda Devi Wadiyar, wife of late Srikantadatta Narasimharaja Wadiyar, has restricted entry to her family members, friends, relatives and media for all rituals which will begin inside the Palace  from Oct. 17 in order to prevent spreading of pandemic. As a precautionary measure, the royal family has banned ‘Vajramushti Kalaga’ which is held on ‘Ayudha Puja’ day as supporters of wrestlers would gather inside the Palace to see them in real action.

M. Lakshminarayan, Private Secretary to Pramoda Devi, told Star of Mysore that this time, the rituals will be held as simple as possible due to COVID-19 scare. Only two priests will be present along with Yaduveer Krishnadatta Chamaraja Wadiyar to perform rituals symbolically. Except those two priests nobody will be present inside the Palace during Sharannavarathri rituals including the Palace sevaks in traditional attire. Even the tradition of priests bringing the royal scion Yaduveer by holding his hand up to the Durbar Hall has been cancelled this time, he added.

Replacement of burned out bulbs begins

Replacement of fused or burned out incandescent bulbs of the Mysore Palace has begun for Dasara festivities. The inauguration of Dasara festival will be held on Oct. 17.

The Palace illumination had been suspended for the last six months owing to COVID-19 pandemic and the illumination will commence from  Oct. 17 and the Palace will be illuminated daily from 7 pm to 9 pm. However, entry inside the Palace is banned for the general public and tourists.

“Every year, we order 20,000 bulbs during Dasara to replace the defunct bulbs. The Palace staff themselves will replace most of the bulbs, while only a few adorning the cupola (gopura) will be replaced by experts using crane for which tenders will be called,” said Mysore Palace Board Deputy Director T.S. Subramanya to  Star of Mysore, this morning.

As many as one lakh incandescent bulbs are used for the Palace illumination. These bulbs are specially manufactured by a few companies in Hyderabad and Delhi.