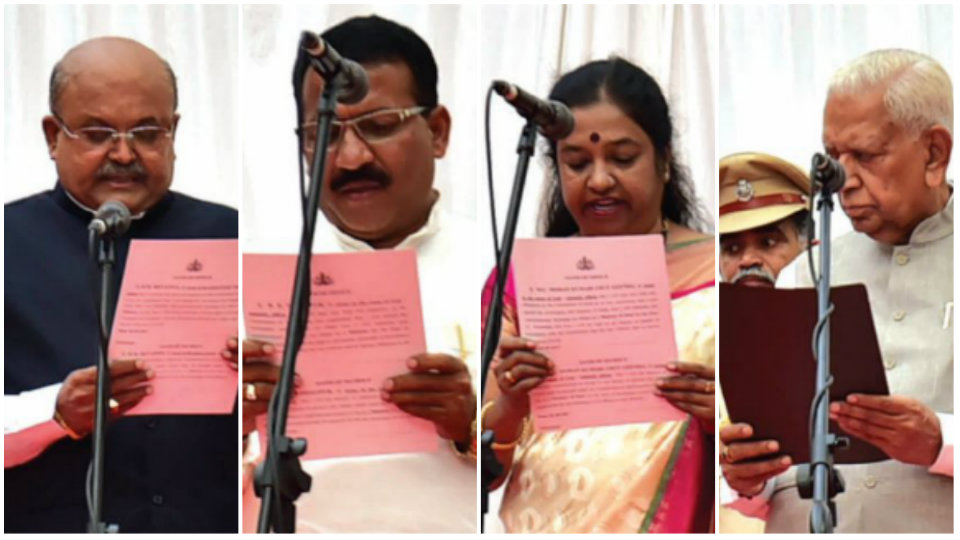 The new Ministers inducted, CM’s sole choice: H.M. Revanna, R.B. Timmapur and Dr. Geetha Mahadevaprasad. Now, all 34 Ministerial berths, including the Chief Minister, have been filled. The Ministry size is determined by Constitutional norms. This is the sixth and, perhaps, the last expansion of the Council of Ministers before the election.

While caste matrix played a vital role in the selection of the two MLCs, Revanna (a Kuruba) and Timmapur (Dalit-Left sect) are known Siddharamaiah loyalists. Though the induction of Timmapur was doubtful yesterday morning, he was inducted as the CM’s will prevailed.

It may be recalled here that a  BJP delegation meeting Governor Vajubhai Rudabhai Vala yesterday morning demanding Timmapur’s non-inclusion into the Cabinet as he was accused of providing false address to vote for Congress candidate in the Mayoral elections in Bruhat Bengaluru Mahanagara Palike (BBMP).

The CM handed over the Home portfolio to Ramalinga Reddy, who was in charge of Transport. The key Transport portfolio was given to H.M. Revanna. Siddharamaiah elevated four Ministers of State to Cabinet rank — Priyank Kharge (IT-BT & Tourism), Eshwar Khandre (Municipal Administration), Rudrappa Lamani (Textiles and Muzarai) and Pramod Madhwaraj (Fisheries and Sports & Youth).

Dr. Geetha Mahadevaprasad was given Sugar and Small Scale Industries, and Timmapur Excise. Ramesh L. Jarkiholi was asked to give up the Small Scale Industry portfolio and take charge of Cooperation Department. Siddharamaiah has created a new Ministry — Skill Development — and allotted it to Labour Minister Santhosh Lad, as an additional charge.

Yesterday also witnessed a rift among the top leadership of the party with Karnataka Pradesh Congress Committee (KPCC) President Dr. G. Parameshwara staying away from the swearing-in function to express his displeasure at his candidate K. Shadakshari, not being accommodated.

Siddharamaiah also overlooked the recommendation of Dr. Parameshwara’s political Secretary G.C. Chandrashekar to the Legislative Council and MLA P.M. Narendraswamy to the Cabinet. Also absent at the function was MLC V.S. Ugrappa, a Ministerial aspirant. The KPCC Chief was also reportedly unhappy with the selection of C.M. Ibrahim as MLC.