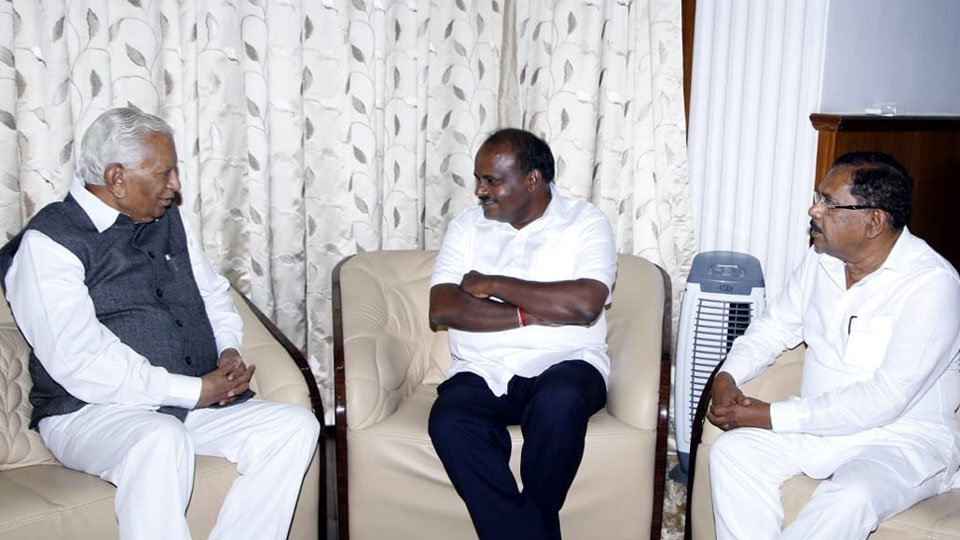 The meeting began at 1.30 pm and sources said that the first group of Ministers are likely to take oath next week. However, the exact dates will be announced after consulting the Governor’s Office. Coalition sources told Star of Mysore that both Kumaraswamy and Parameshwara will hold a joint press conference in Bengaluru at  4.30 pm today.

Kumaraswamy indicated that the impasse over portfolio sharing between the two alliance partners have been finalised. According to the understanding between the coalition partners, Congress would have 21 Ministers and the JD(S) 12. However in the upcoming expansion the full team of Ministers might not be sworn-in, sources in both the parties indicated.

AICC General Secretary (Karnataka in-charge) K.C. Venugopal had air-dashed to Bengaluru yesterday for wrapping up the understanding with the JD(S)  after senior Party leaders held discussions with AICC President Rahul Gandhi, currently in the US, through video-conferencing and came to an understanding.

According to Congress sources, the party had acceded to JD(S) demand of retaining Finance portfolio with a truncated Home given to the Congress. The other part of the Home Ministry will be held by the JD(S).

“I, Deve Gowda (JD(S) supremo) and Venugopal will sit together and discuss developments that have happened in Delhi and we will come before public regarding Cabinet formation and portfolio allocation, as also on the co-ordination committee,” Kumaraswamy told reporters. Hectic parleys were on between both the parties on Cabinet expansion and portfolio allocation, soon after HDK proved majority on the floor of the Assembly on May 25.

Reports say that the Congress and JD(S) alliance in Karnataka has mutually reached a decision of not sharing the post of CM and Kumaraswamy will complete his five-year term. The alliance is also likely to contest the 2019 elections together.

2 COMMENTS ON THIS POST To “Cabinet Expansion next week”