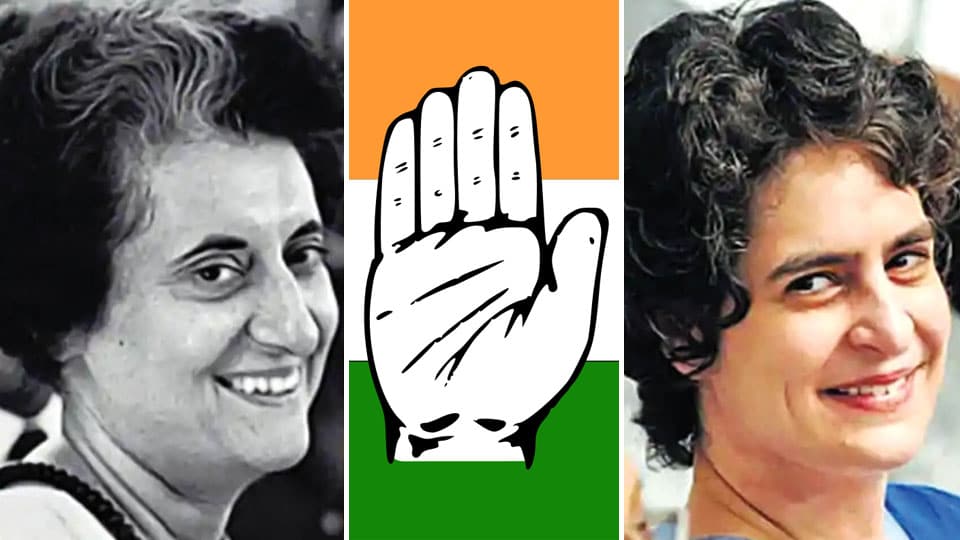 Can Indira 2.0 save Congress?

On 23rd January, the Congress finally played its Ace card when it was left out of the SP-BSP coalition in UP. It appointed Priyanka Gandhi Vadra as the Party General Secretary for Eastern Uttar Pradesh in the run-up to the Lok Sabha elections.

Priyanka’s entry into full-time politics surely has given hope to most Congressmen. In fact, in 2013 itself some Congressmen wanted Priyanka to enter politics but they held their peace because they didn’t want to end up being suspended from the party like it happened to two Congressmen in Allahabad, who were seeking Priyanka’s candidature from Phulpur Parliamentary Constituency in UP. Many felt the suspension order was passed to stop any act that would undermine Rahul Gandhi’s leadership within the party.

But now Congress needs a Gandhi, who exudes the same aura Indira Gandhi did for the party, and so an Indira Gandhi 2.0 has been introduced in the form of Priyanka Gandhi because, over the past few years there has been the relentless ‘infantilising’ of Rahul Gandhi.

He has been called an Amul Baby, his actions on camera have been termed comical and his speeches have been called immature. So over the years, he has been reduced to a political Peter Pan — never growing up to be a powerful political leader.

But with Priyanka it’s different. Every time she comes on screen or walks up a dais, she seems to overshadow her older brother. It is this charisma that will allow her to eat into the much-needed media space that PM Modi is hogging now.

Many feel Priyanka is a trump card as she conjures up the image of her grandmother Indira Gandhi. In fact, after her appointment Congress workers in Lucknow were seen holding placards that read “Indira is back.”

Priyanka’s aggressive style of oration and that short haircut completes that handsome Indira Gandhi visage, an image which is still engraved in the minds of rural India.

No wonder one of the villagers, when Priyanka was canvassing in UP in 2014 election, said, “We like Priyanka Gandhi more than Rahul. When she gets down from her car and walks towards the people, you feel as if Indira Gandhi in her ‘Ma Durga’ avatar is standing in front of you.”

So Priyanka does exude certain toughness and, as it has now transpired, she can be quite confrontational too. In 1999, when her uncle Arun Nehru had left Congress and joined BJP and was contesting from Amethi, Priyanka Gandhi visited the Constituency to support her father’s friend Satish Sharma, who was contesting on a Congress ticket. In her speech with reference to Arun Nehru she said, “The BJP candidate here is someone who betrayed Indiraji’s family and plunged a dagger in my father’s back. How did you let that traitor even enter this place?”

The crowd responded with a chorus, “Priyanka nahin yeh aandhi hai, is yug ki Indira Gandhi hai” (She is not just Priyanka, she is a typhoon, the Indira of this era).

Yes, there is a streak of aggressiveness in her that manifests in a more sincere and passionate way than her brother, whose aggression lacks passion. And this aggression may come in handy as PM Modi’s and UP CM Yogi Adityanath’s Constituencies are in Eastern UP, Priyanka’s area.

For now, Priyanka may have entered politics to help her brother, like her father did. Many may remember when Rajiv Gandhi was asked why he had joined politics when earlier he had said he would not, Rajiv re­plied, “The way I look at it is that mummy has to be helped somehow.”

Priyanka too in a 2009 interview had said, “I’m very clear I don’t want to be in politics. I’m very happy living my life the way I am. I think there are certain aspects of politics which I’m just not suited to.” Guess now she, like her dad, came to help her mummy and brother more than the party.

We wonder if she can do more than just help? What if she does so well and her partymen ask her to be the PM?  After all, it’s in her blood, literally, if we go by what a Senior Congress leader said.

So guess, the Congress party has finally got its much-needed fresh blood.  Or is Priyanka doing it to save her ‘bitter-half’ as yesterday Robert Vadra moved a Delhi Court seeking anticipatory bail in a money-laundering case lodged by the Enforcement Directorate (ED)? Who knows?

But for now it’s good that a woman, a 47-year- old mother of two, has stepped into Indian politics that lacks young female leaders at the top. Let’s see if Yuvrani delivers the leadership, the allure and victory that have eluded the Congress. And for the sake of a robust Opposition let’s hope Yuvrani delivers, because a healthy democracy needs a strong Opposition and we don’t have one now.

P.S: Ah! Politics is truly the art of possibilities and U-turns. In 1980, after Sanjay Gandhi’s death, Rajiv Gandhi was planning to join politics. Journalist Hamish Macdonald of Far Eastern Economic Review asked Sonia Gandhi how she felt about it and she had replied, “I would rather have my children begging in the streets of Delhi than him becoming a politician.” Rajiv Gandhi went on to become the PM, she herself later went on to become the President of the Congress Party, then the background PM of India and now both her children are politicians. Wah! Long live dynastic politics!!