Home » Feature Articles » Can you imagine building a house for just Rs. 5,000? 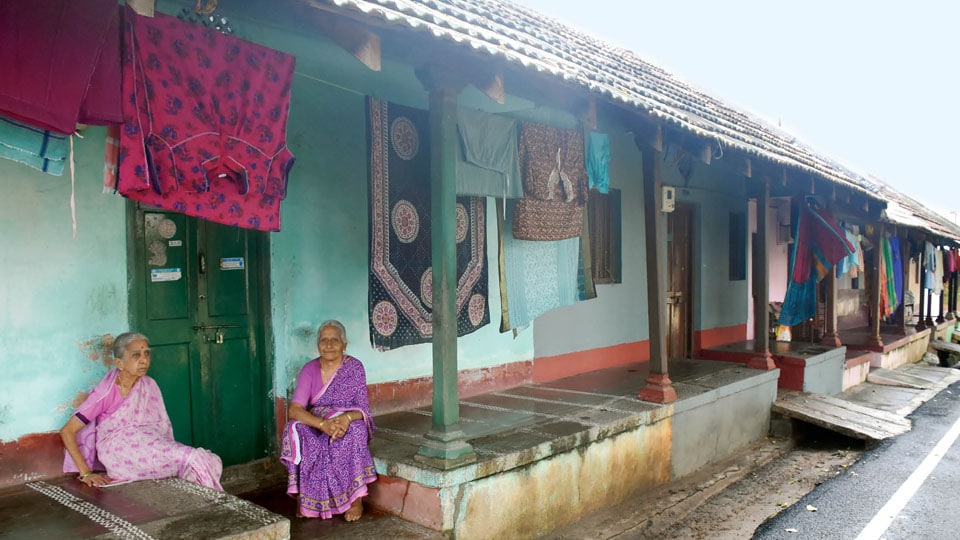 Can a decent living house be built by spending just Rs. 5,000? One may deride such a proposal or may mock such a project. But this was proved possible in Mysuru during the reign of Nalwadi Krishnaraja Wadiyar. What’s more, these model houses are continuing to serve the families living there, who feel happy they have a roof over their head.

The old concept of Agrahara continued even during the reign of Nalwadi although it had been given up in favour of Purams and Mohallas to meet the housing needs of the increasing population. Extensions were needed to be built on modern lines and hence focus had turned towards the creation of Purams and Mohallas than ordinary one-stretch Agraharas with a limited number of houses.

The Agraharas which came up during the period of Krishnaraja Wadiyar IV were significant because they showcased low-cost houses needed to be built for the poor. Two Agraharas came up with this concept and they were the Sreenivasan Agrahara and the Rajaram Agrahara, in the southern part of the city. The two Agraharas were not limited to just 20 or 21 houses as those created during the period of Krishnaraja Wadiyar III. More houses were built there, keeping in mind the changing requirements of the residents.

How did the concept materialise?

The concept of these ‘model’ Agraharas was devised by M.A. Sreenivasan (1897-1998), who had an illustrious career in the Mysore Civil Service. He occupied many posts in the princely State of Mysore, including the posts of President of the Mysore City Municipal Council and Chairman of the City Improvement Trust Board (CITB), the present Mysore Urban Development Authority (MUDA).

The then Dewan, Sir Mirza Ismail, was visiting Mysore regularly and going round the city once or twice a month inspecting its different parts. Sreenivasan was accompanying the Dewan, also on horseback, during such inspections. As a result, he came to know of the problems people were facing in the city. He also saw the very unhygienic conditions in which the poor lived in the slums.

“I had not imagined that a fair city contained so many hovels and slums hiding behind narrow and blind alleys. The slums were a pitiful sight: Men, women, children, families of three, four, five huddled in small, woebegone huts and shacks, roofs covered with matting, gunnies, broken corrugated sheets, in huts with not a chink or opening for ventilation, except for the door, with access only to a distant water tap, a far-off latrine that was over-used, soiled and dilapidated; where the air was foul and stray, mangy curs abounded, ” he writes in his book, “The Last Mysore Pradhan – The Memoires of M.A. Sreenivasan”, his autobiography earlier titled, “Of the Raj, Maharajas and Me.”

A survey had revealed that not less than 3,000 families lived in such single-room huts without ventilation. It was so dark inside that an oil lamp was lit even during the day. In one such shack lived a golden mace bearer who heralded the entrance of the Maharaja into the Durbar Hall and stood behind the throne during the Nazar, “beautifully dressed and turbaned.”

Moved by their pitiable condition, Sreenivasan persuaded Prince Jayachamaraja Wadiyar, who was sitting with him at a meeting of the Municipal Council as part of his administrative training, to accompany him to the slum. The future Maharaja was astonished at what he saw.

Seeing the wretchedness of the slums and the misery of the inhabitants, Sreenivasan was convinced that “a clean home, however humble, is a nursery of health and character, and that money spent on the poor is a sound investment in good citizenship.” He made a beginning in building low-cost model houses drawing inspiration from the old concept of Agraharas to serve as models for a comprehensive rehousing and housing scheme for the city. Houses were built around an open quadrangle adjoining the Karohatti Road, now called Ramanuja Road, in 1936.

He explains each house had a built area of 500 sq. ft. with a tiled roof, bedroom, bathroom, a chimneyed kitchen, dining space, latrine, a water tap, and two electric lights. A special feature of the house was a pial, a long seat by the side of the entrance, where the occupant receives visitors or relax, which could also serve as a bed on occasions.

The houses were owned by the Municipality and allotted initially for a period of 20 years. The monthly rent or payment included instalments towards the cost of the house, enabling the allottee to become owner at the end of the period. The monthly rent compared to rent elsewhere in the city was lower. It was as low as Rs. 6 to Rs. 12 per month.

Initially, 40 houses were built in an Agrahara at a cost of Rs. 5,000 each — “a figure that may seem a myth today” and more so now when the construction cost has sky-rocketed. The Agrahara was inaugurated on the Ugadi day of 1938 by Yuvaraja Kanteerava Narasaraja Wadiyar, father of Jayachamaraja Wadiyar. The Agrahara was later named “Sreenivasan Agrahara” in recognition of Sreenivasan’s dedicated service to the city.

The Sreenivasan Agrahara scheme caught up and aroused a great deal of interest. V.D. Rajaram Mudaliar, a philanthropist, came forward with a donation of Rs. 15,000 to the Municipality for the charitable purpose of construction of an Agrahara for the benefit of the low-paid officials working in the civic body.

The Municipality undertook the work and built a group of low-cost cottages and named the Agrahara after the philanthropist who was honoured with the title ‘Dharmaprakasha’ by the Maharaja. Rao Bahadur D. Banumiah was another philanthropist, who made a similar contribution.

Others donated equipment for playground and radio sets for being installed in the quadrangles, which also served as parks. Taking Sreenivasan Agrahara as an example, over 100 houses came up by the end of 1938. These low-income group houses were built under several funds, including the munificent donation made to the Municipality for the construction of low-cost houses for the poor by Yuvaraja Narasimharaja Wadiyar.

The Rajaram Agrahara that came up was an example of close collaboration, Sreenivasan writes and adds, “It fills my heart with pleasure every time I see it, the block of houses built around a small park and play-field of Ramanuja Road, and the neighbouring Agraharas that were modelled on it.”

Writing about these Agraharas with model houses, Sreenivasan says “the Rajaram Agrahara was not large or pretentious. However, the idea behind it deserves wider recognition and implementation, more so today when schemes of social work are the talk of many high and distinguished platforms. The idea was to make a philanthropic gift, serving a double or triple purpose.”

The houses were owned by the Municipality and let, at low sub-economic rents, to the deserving houseless. The rent from the houses, after deducting expenses incurred in respect and upkeep, and in rent-collection, was paid by the Municipality towards the maintenance of the City’s Maternity and Child Welfare Centres which served the nursing mothers and children.

Sreenivasan has an interesting incident to narrate about the Agraharas he built. It happened eight years later when he was attending a meeting convened by the Central Government on housing. Ministers from various States were invited to attend the meeting. The official report placed before it referred to the houses built in Mysore by the initiative taken by Sreenivasan.

Sir Ramaswamy Mudaliar, who was the Chairman of the meeting, invited the Mysore delegates to speak on their model housing project. At this moment, there was a loud guffaw. It was from West Bengal Minister Suhrawardy.

Pointing to the report, he observed that a zero had inadvertently been omitted from the figure given as the cost of each house. But, before Sreenivasan could speak, Ramaswamy Mudaliar intervened and told Suhrawardy that he had himself visited the houses and the figure of Rs. 5,000 was correct. Mudaliar suggested the West Bengal Minister visit Mysore and see the Agraharas for himself.

This is how the two Agraharas — Sreenivasan Agrahara and Rajaram Agrahara — and other model houses around them came up in the southern part of the city. The houses more or less remain in the same shape, possibly with minor changes to suit the needs of those living there now.

These houses continue to serve as a model to our city planners on how houses can be built at low cost. Perhaps, authorities and developers can draw inspiration and provide houses for the roofless poor at affordable cost at a time when construction cost has gone beyond the reach of not only the poor but also of the middle class.

M.A. Sreenivasan had an illustrious career

Born in 1897 in a reputed family of scholars and priests settled around the temple town of Srirangapatna, who included two historic personalities, Tirumal Row and Narayan Row, Pradhans of the period of Tipu Sultan, M.A. Sreenivasan had an illustrious career in the Civil Service of the then State of Mysore headed by Krishnaraja Wadiyar IV, commencing from 1918.

After holding various posts, he rose to become a Minister in the princely State under Dewan Sir N. Madhava Rau and then became Dewan of the Princely State of Gwalior under Maharaja Jiyajirao Scindia.

He served as Mysore’s Trade Commissioner in London and later on held the offices of Controller of Supplies and Controller of Purchases in the Government of India. While working as a Minister in the Maharaja’s Council of Ministers, he founded the University of Agricultural Sciences at Hebbal in Bengaluru. He represented the erstwhile Princely State of Gwalior as a member of the Constituent Assembly during 1947-48.

After his retirement, he became the first Indian Chairman of the John Taylor Company, which was mining gold at Kolar Gold Fields, served as Chairman of Consolidated Coffee Limited and Coffee Lands and Industries, Director of Air India and other companies. He was also the Founder-President of the Greater Mysore Chamber of Commerce and Industry.

After a fruitful life spanning over a century, Sreenivasan passed away in 1998 at Bengaluru at the age of 101 years. Sreenivasan’s son late M.A. Parthasarathy was a former Chairman of the Bangalore Urban Arts Commission, whose daughter, Devaki Jain, is a reputed Indian economist and a Padma Bhushan awardee. Sreenivasan Jain of NDTV-fame is one of her two sons.