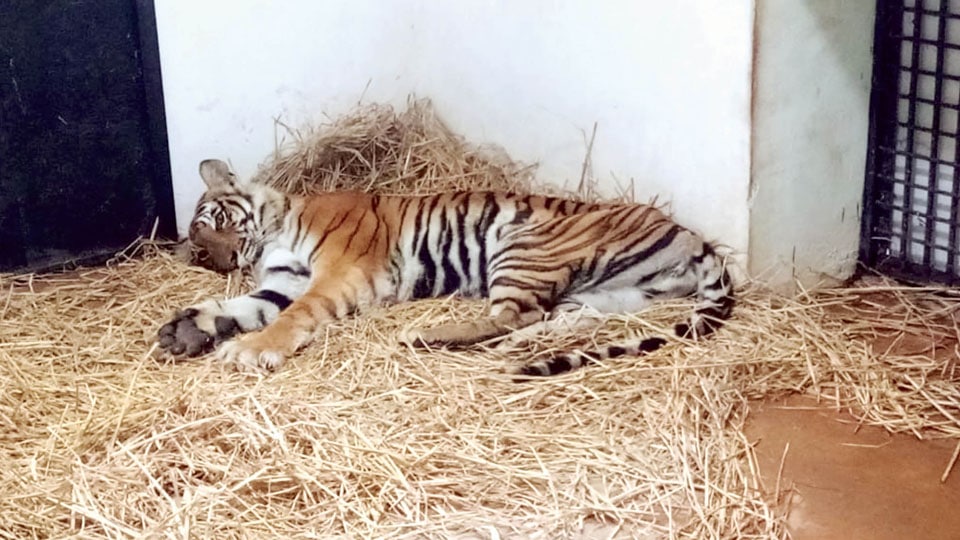 Ponnampet/Mysuru: Darting experts Dr. Mujeeb (veterinarian) and Akram were summoned from Hunsur and Mysuru for the tiger capturing operation at Manchalli village yesterday and Abhimanyu, Gopalaswamy, Krishna and Mahendra were brought from Mathigodu Elephant Camp.

One of the teams identified pug marks and tracked the feline to the spot where it was finally located near Manchalli village. The team managed to dart the animal and the tranquillisation was done about two kilometres from the spot where Ayyappa was killed.

Before the dart was fired, the tiger tried to attack Abhimanyu and its Mahout Vasantha. Seeing Vasantha, the tiger growled and crouched to be ready for the attack. But Abhimanyu, known for its daring acts in tiger and elephant capturing operation, did not fear the feline and went ahead amidst coffee plants, enabling Dr. Mujeeb to fire the tranquilliser. But he missed the target and the dart hit a coffee plant. He was successful in his second attempt and the animal was found sedated about one kilometre from where the dart was fired.

It is a tigress of around nine years old and she has an injury on her right paw. Officials are assessing the condition of the dentures and nature of her injury further to figure out why the feline had taken to killing humans.

“The tigress has pre-existing wounds on its right legs and it looks like the animal had lost its capacity to hunt in the wild and was looking for an easy prey. At present, she has been shifted to Mysuru Zoo’s Chamundi Animal Rescue Centre at Koorgalli on the outskirts of Mysuru city,” Forest officials said.

At the Koorgalli Centre, the animal is still in a sedated condition and it has not regained its activeness. “Till 10 am today, the animal was in a drowsy state. Its left paw has been injured too and its canines have worn out and the animal has lost capacity to hunt. We have sent the samples of hair and blood — obtained from the dead body of the woman who was mauled to death — to a laboratory in Bengaluru to determine if it was the same tiger that had attacked the woman,” Zoo Executive Director Ajit M. Kulkarni told Star of Mysore this morning.