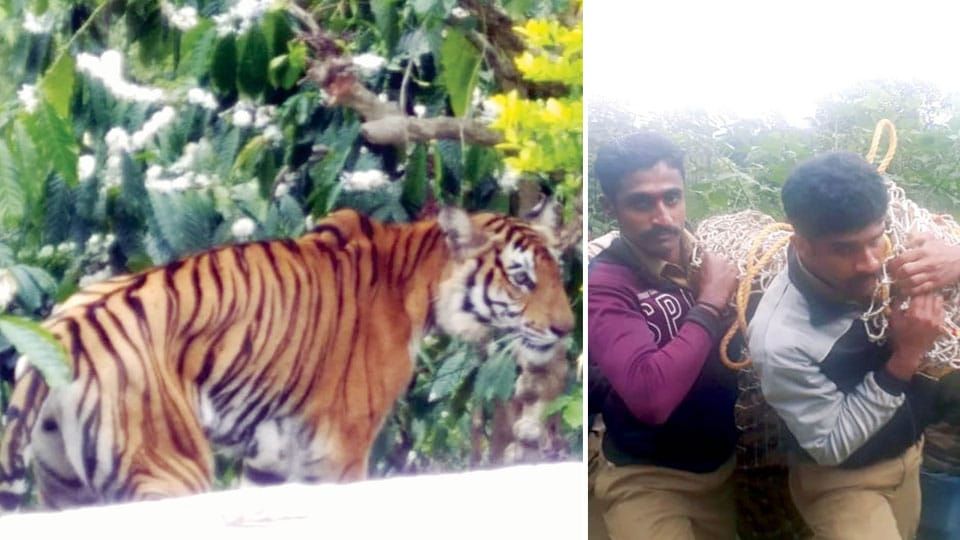 Ponnampet/ Srimangala: The tiger that is believed to have killed two people in South Kodagu within a span of 12 hours on Saturday night and Sunday morning was captured by Forest Department last afternoon after villagers staged protest and a bandh demanding the feline’s capture. It is a nine-year-old tigress.

The Department was under severe pressure to finally act after the deaths of humans. The area has faced the menace since over a year but the Department had not taken any action despite the big cats killing more than 80 cattle heads.

Residents alleged that except for disbursing a paltry compensation of Rs. 10,000 per cattle head (while the actual cost is Rs. 60,000 to Rs. 75,000), the Department had done nothing much.

Though the officials said that it was the same tiger that killed two people, villagers are sceptic as the tiger that was captured at Manchalli village was weak without food for days and it bore injury marks all over its body.

While the Department officials said that a DNA test will be conducted on the animal from the samples obtained from the bodies of victims, villagers say that an easily available weak animal has been captured while the ‘man-eater’ was still on the prowl.

Giving credence to the argument of the villagers, a big cat was spotted crouching amidst coffee plants at Mathoor village this morning at 8 by a school girl who was on her way to the school. Seeing the tiger, the girl who was walking ahead of her friends panicked and fainted.

Fortunately, there were family members and fellow students nearby who came to her rescue. Seeing human beings, the tiger disappeared into the thick coffee plantations. The girl has been admitted to the Gonikoppal Government Hospital.

In another incident reported this morning, a cow owned by Dekamada Pushpa, was attacked and a part of its head has been bitten off at Thavalageri village near Srimangala. Mathoor and Thavalageri are at least eight kilometres apart and villagers say that it is the same tiger that had killed the woman yesterday morning. The teams that had captured the tiger yesterday have rushed to Thavalageri village before any more attacks on humans take place.

Three tigers on the prowl

Last evening’s tiger capture operation was conducted with the help of trained elephants. The tiger was put in a cage after trained shooters of the Forest Department sedated it with darts. The big cat had killed 14-year-old Ayyappa and 54-year-old Chinni at Kumatoor and Shettigeri villages.

While the villagers and residents of Shettigeri and Srimangala staged bandh and protest at Srimangala keeping the dead body of Ayyappa by the side of the road, the Forest Department authorities had constituted teams for combing and capture operation.

The protesters insisted on shooting the tiger and they relented after the officials showed them the shoot-at-sight order sent by the higher-ups in Bengaluru through WhatsApp. The protests were withdrawn later.