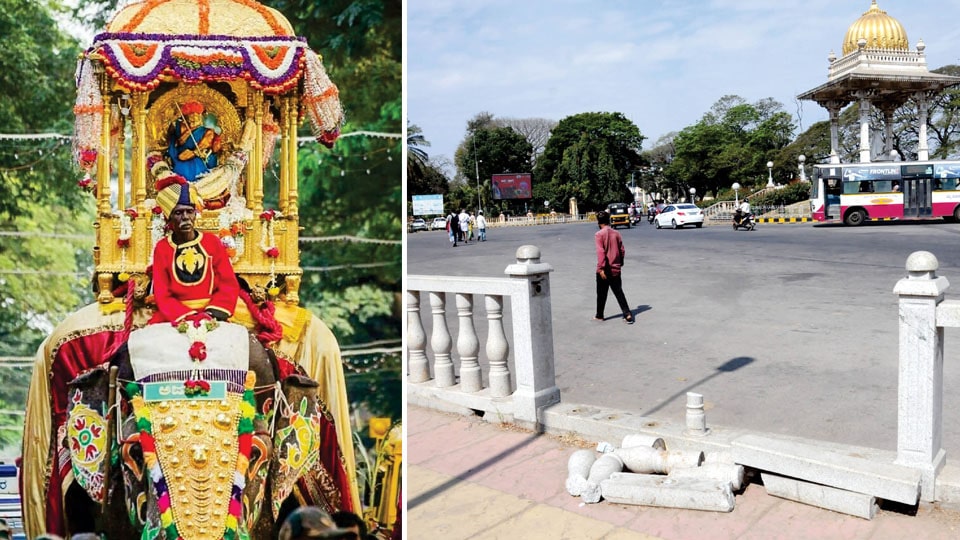 Cash-strapped MCC to only take up priority Dasara works

Mysuru: Does the Mysuru City Corporation (MCC) have money to spend for this year’s Dasara? This question is bothering Mysureans as the festival dates are nearing and they are not seeing the annual and ritualistic colourful makeover of the city. They are only a witness to minor road works at some parts of the city.

With 39 days left for the Dasara grand spectacle to unfold, there are no signs of preparations for the world famous event. The 10-day festival is scheduled to begin from Sept. 29.

With little time to prepare, most of the potholes-ridden roads in the surroundings of Mysore Palace, Jumboo Savari route and other prominent roads are yet to be asphalted. Also, broken ornamental balustrades on the Raja Marga have to be removed and replaced with new ones and facilities for tourists and visitors coming to city have to be made.

Most of the roadsides are dumped with construction debris and lack of cleanliness can be seen everywhere with garbage also being dumped on street corners. Most of the drains are clogged and sewage water can be seen flowing on roads.

If one takes the Outer Ring Road that connects many prominent roads, debris and garbage is found dumped on the roadsides with foul smell emanating from garbage heaps due to recent rains.

MCC sources told Star of Mysore that this year, only priority works will be taken up. Potholes on important stretches will be filled and painting of landmark structures and walls will be taken up. Sources said that the MCC was reeling under severe financial crisis as the government was yet to release funds.

The civic body is yet to receive Rs. 16.50 crore allotted for previous Dasara. Though the coalition Government had released Rs. 5 crore under Nagarothana Scheme, this money cannot be utilised for Dasara as per scheme guidelines.

In the last Budget, the then Chief Minister H.D. Kumaraswamy had announced a financial grant of Rs. 150 crore. But the MCC is yet to receive the money. Owing to non-release of funds, the MCC has not settled the bills of the contractors who worked for last year’s Dasara. As the payment is not made, this year it will be difficult for the MCC to undertake works as the contractors may not come forward to do the works, sources added.

At the Dasara High Power Committee meeting, CM Yediyurappa has told the officials that owing to floods and landslides across the State, this year’s Dasara will not be on a grand scale. He, however, told them to maintain the traditional character. Since the Government wants scaled-down celebrations, getting funds may not be an easy task, sources pointed out.