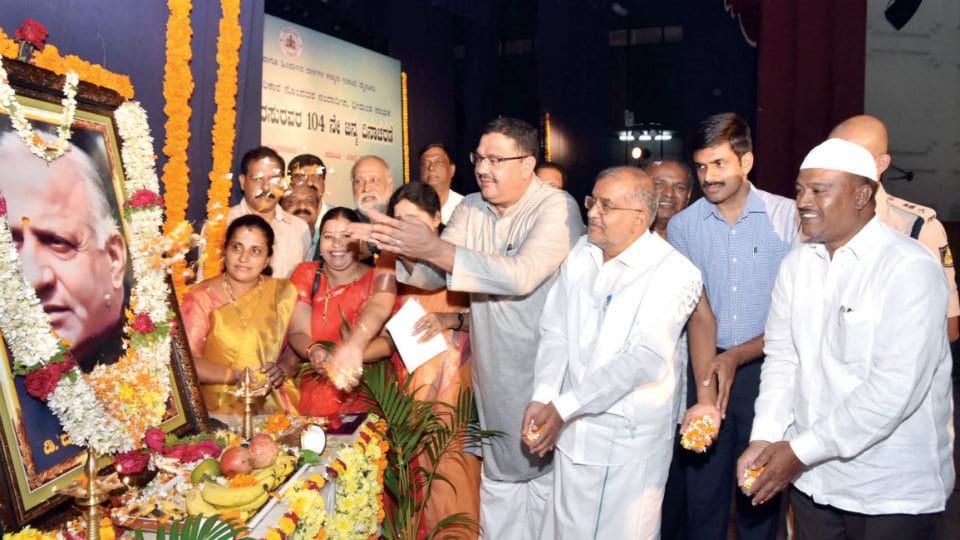 Inaugurating the programme, Mayor Pushpalatha Jagannath remembered the contributions of Devaraj Urs for the welfare of Backward Communities and the State as well. She mentioned that every person must follow his footsteps and ideologies to grow as role models.

Speaking on the occasion, MLA Tanveer Sait remembered the contributions of both former Prime Minister late Rajiv Gandhi and former Chief Minister late D. Devaraj Urs for the welfare of Country and the State respectively.

“Rajiv Gandhi as Prime Minister launched various welfare programmes for the benefit of the people. Being a youngster, he gave prominence to IT and BT sector. Today, if the country has seen progress in this sector, it is because of the strong foundation laid by him. Not only IT and BT but he also gave importance to other sectors including Industries and Agriculture,” he added.

Speaking about late Devaraj Urs, he said that the former CM was known for his administrative skills, backward classes welfare, providing land for the landless and introducing 20 point programme in the State.

In Hunsur, which is the home town of late Devaraj Urs, the Taluk Administration celebrated the birth anniversary of the late former CM by garlanding his statue and samadhi. Disqualified MLA A.H. Vishwanath, Assistant Commissioner Veena, Dy.SP Sundar Raj and others were present.