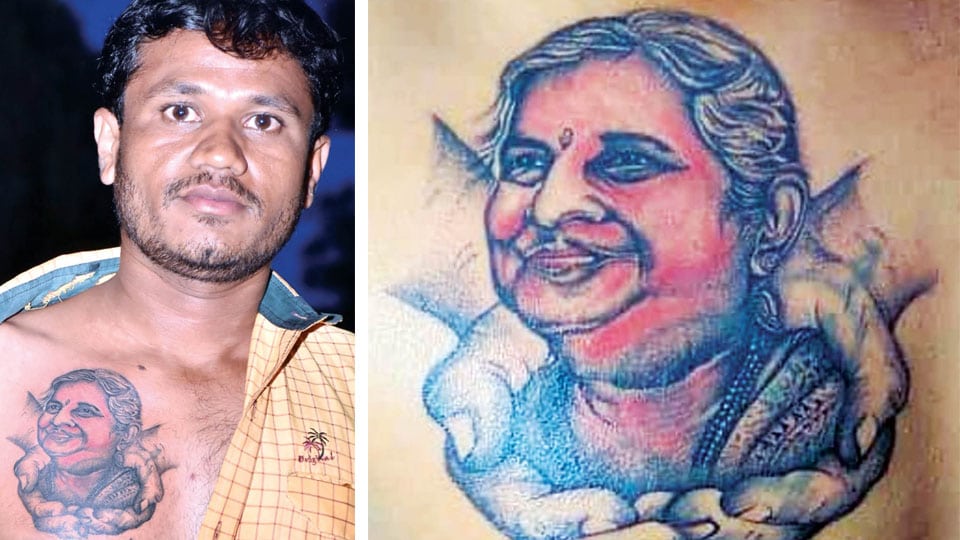 Mysuru youth gets Sudha Murty’s face tattooed on his chest

Mysuru: There are many ways of displaying one’s admiration to persons who become role models in one’s life and a youth from the city chose to show it by tattooing the face of Infosys Foundation Chairperson Sudha Murty on his chest.

The youth, Lokesh, works as a cab driver for his brother’s cars and he always found the speeches and words of Sudha Murty very inspirational and hence as a mark of devotion and respect, he got the photo of hers tattooed on his chest, on her birthday (Aug.19) yesterday.

“It is to celebrate her 69th birthday that I got this tattoo done on my chest. I am a great fan of Sudha Amma. I could not turn to anyone when I was in trouble. It was then I started following her speeches in print and on social media. She has done great social work and though many of her charity works are well-known there are so many lives she has influenced that does not come into the public eye. That is why I admire her a lot,” said the thirty-one-year-old Lokesh.

A resident of JC Nagar Income Tax Layout, Lokesh, who dabbled as TV cameraman for a private channel for some time said that not only he was a fan of Sudha Murty but even his mother Honnamma followed the Philanthropist. “Whenever Sudha Murty appears on TV, my mother calls me and says look your Amma is there,” he said.

Asked what impressed him the most about Sudha Murty, he said, “It is her benign smiling face and simplicity that drew me to her. She has so much of wealth, but she never flaunts it and instead displays only kindness.”

On how he felt when he first met her in the Durbar Hall of the Mysore Palace during the birth centenary celebrations of Sri Jayachamaraja Wadiyar on July 18, 2019, he said that it was due to the efforts of a few photographer-friends that he was able to get entry to the Durbar Hall.

“Sudha Murty, on seeing the tattoo of her face on my hand, asked: Did it not pain when you were getting tattooed and all the time she had that beautiful smile on her face,” he recalled.

To another question on how long it took for the tattoo on the chest, he said that it took seven hours. The first two hours were spent for cleaning and etching the face and the next five hours tattooing, while the tattoo on the right hand that was done sometime back took four hours.