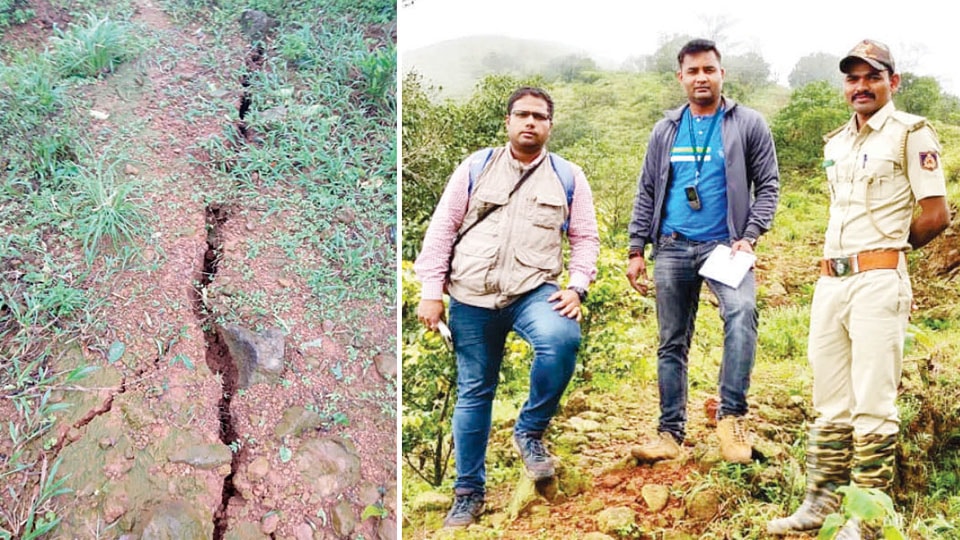 Madikeri: A day after inspecting cracks developed at Ayyappa Swamy Hill in Virajpet, a two-member GSI (Geological Survey of India) team visited Brahmagiri Hill range in Talacauvery on Sunday, following reports that huge cracks had developed at several locations in the Hill range.

The team also got to know that the Forest Department had dug pits and planted saplings using heavy machinery, which may have caused loosening of the soil layer on the Hill range, leading to wide cracks.

Basu and Sharma also visited Korangala, where massive landslides were reported and studied about the reasons for such huge landslips.

The cracks on Brahmagiri Hill in Talacauvery, the birthplace of River Cauvery, the lifeline of crores of people along the river basin, has been a cause of worry for local people.

The residents have appealed the Government and the District Administration to take immediate measures to save Brahmagiri Hill range, which they consider as holy and also ecologically sensitive for its lush green cover.

The GSI team, after conducting a thorough study on all factors that have caused cracks in hillocks, is likely to submit a report to the Government on the measures to be taken.

Many Hills under threat of collapse

Meanwhile, many other hillocks elsewhere in Kodagu district are facing the threat of collapse, as cracks have reportedly surfaced in some of them.

After Brahmagiri Hill range in Bhagamandala, Ayyappa Swamy and Malethirike in Virajpet and Manipare Hillock at Thora village along the Kerala border, several other Hills too are said to have developed cracks, giving rise to serious concerns among local people.

Although the district has got a break from rains for the past couple of days, the people living near the hillocks still feel that their troubles are not far from over.

Many residents of Kodagu feel that this year’s rainfall is the highest in decades and has similarities with the 1972 deluge, when rain caused havoc and untold misery. But then, there were not much causalities as the population was less and urbanisation was yet to pick up pace.

But this year, the damage has been extensive with many  homes collapsing and hundreds of people taking shelter in relief camps set up by the District Administration.

The district is facing the deluge for the second successive year. Last year, the deluge had devastated the district to such an extent that it will take many years for reconstruction.

Following last year’s rain ravage, a GSI team had extensively toured the district to undertake a detailed study of landslides and landslips. The GSI then had classified dangerous zones under four categories and had warned that villages coming under these zones could face nature’s fury once again. As such, the District Administration had taken many measures on a war-footing to prevent casualties and damages to properties as much as possible.