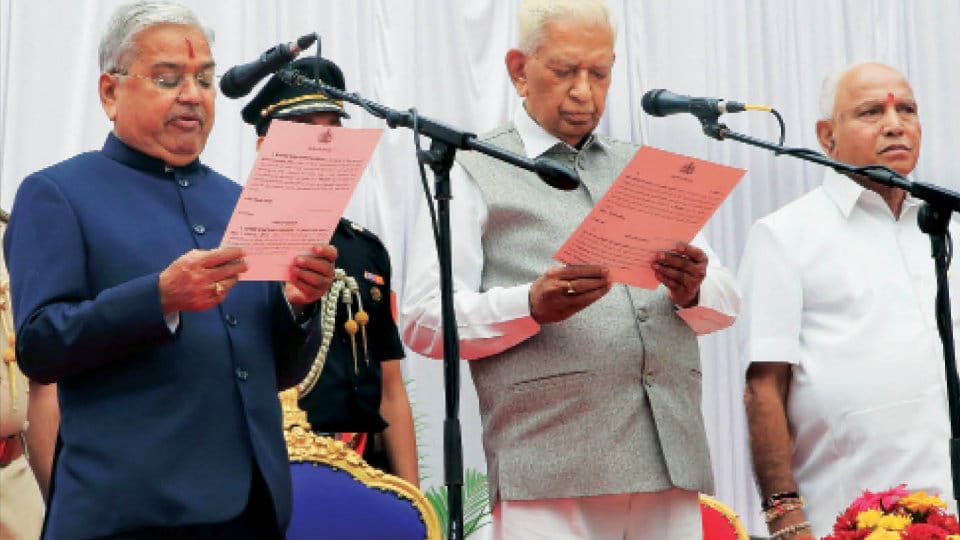 Bengaluru: Twenty-five days after being sworn-in as the Chief Minister, following the collapse of the JD(S)-Congress Government, CM  B.S. Yediyurappa (BSY) inducted 17 members into his Cabinet at Raj Bhavan here this morning.

Prabhu Chauhan, Madhuswamy, Dr. Ashwath Narayan and Shashikala Jolle are the only new faces in the Cabinet, while all others except Independent MLA Nagesh, had served in the previous BJP Government that ruled the State from 2008 to 2013.

The coastal districts of Dakshina Kannada and Udupi which gave the BJP 12 out of the 13 seats and Uttara Kannada which gave a boost to the BJP have been given a raw deal.

There were speculation that S. Angara, who has won from Sullia (SC) seat in Dakshina Kannada district for a record six consecutive times, would definitely make it to the Cabinet. But, that was not to be, as Angara, despite having the credentials was left out.

Haladi Srinivas Shetty, a five-time MLA from Kundapur, too failed to make it into the Cabinet. Shetty had quit BJP after he failed to find a berth in the earlier BJP Government headed by Jagadish Shettar.

Yediyurappa had a tight rope walk during the Cabinet expansion as he had to craft a perfect caste and regional balance, in view of a large number of aspirants. However, with no decision yet by the Supreme Court on the 17 disqualified Congress-JD(S) MLAs, whose resignation from the Assembly paved the way for the BJP Government in the State, BSY has kept 16 Cabinet berths vacant which are likely to be filled up at a later stage.

The Hyderabad-Karnataka region that comprises six districts has just one Minister in Prabhu Chauhan who represents Aurad (SC) Assembly Segment in Bidar district.

Disqualified Congress Legislator from Gokak, Ramesh Jarkiholi, who triggered the collapse of the JD(S)-Congress Government, is said to have played a key role in the induction of Laxman Savadi, while also seeing to it that his political rival in Belagavi district Umesh Katti, who was perceived to definitely get a place in the Ministry, was kept out. Laxman Savadi had lost to Mahesh Kumtahalli of the Congress (now disqualified) from Athani Assembly segment in the 2018 Assembly poll.

Meanwhile, BJP MLA from Hosadurga Goolihatti Shekar, who also missed out, expressed his anger saying that he had made a mistake by joining the BJP.

Shekar, who was a Minister in the earlier BJP Government after having won from Hosadurga as an Independent candidate in the 2008 Assembly polls, skipped the swearing-in ceremony at Raj Bhavan, although he was in Bengaluru.

Likewise, more than a dozen BJP MLAs, who were keen aspirants of a Ministerial berth, too abstained from the swearing-in ceremony to register their protest for not considering them, it is learnt.

The portfolios of all the inducted Ministers are likely to be announced this evening.

…but protests erupt at Chitradurga

Even as BSY inducted 17 members into his Cabinet, protests erupted at Chitradurga town as BJP workers came to the streets demanding a Cabinet berth for senior Party Legislator G.H. Thippareddy.

Supporters of Chitradurga MLA Thippareddy, who gathered at Gandhi Circle in the heart of the town, turned violent and set ablaze a motorcycle. The protestors also blocked the busy Bengaluru-Pune Highway for sometime that severely disrupted traffic movement, before the Police dispersed them with a mild lathi charge. Police have taken more than 20 persons into custody, it is learnt.