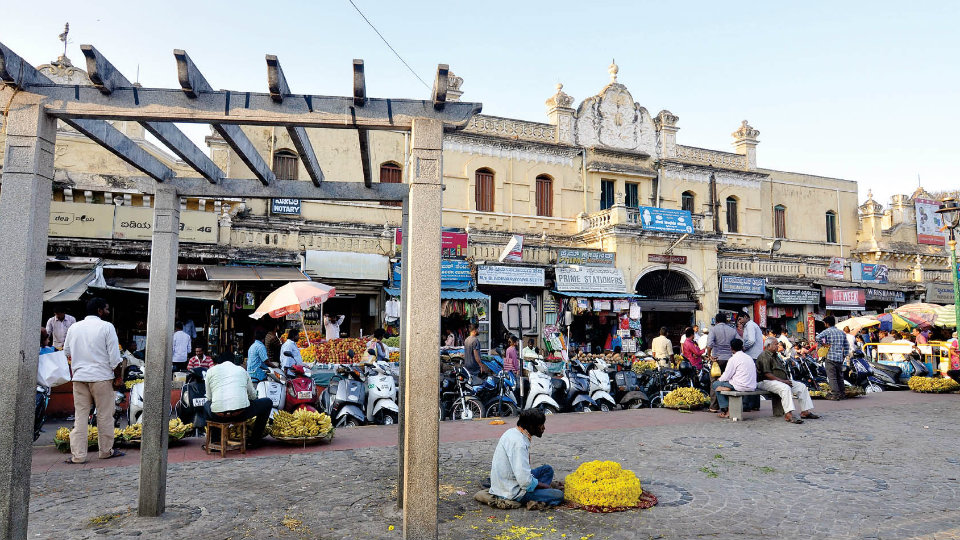 The decision of Mysuru City Corporation (MCC) to knock-down the two historic buildings — the Lansdowne Building and the Devaraja Market — has resulted in immense consternation on the social media platform with many netizens expressing their condemnation of the decision taken by the MCC without consulting the stakeholders or expert conservationists and merely acting on the recommendation of the Task Force, which had no conservation architects in the Committee.

The article by this author published in Star of Mysore (SOM) on February 2, under the title, “Heritage laid bare: The crumbling Lansdowne Building,” has received response from a large section of the members of Facebook, many sharing the link and posting their comments and also sharing other links of related reports published in this newspaper, including Star of Mysore Editor-in-Chief K.B. Ganapathy’s “To raze or not to raze.”

The lovers of the royal legacy of Mysuru, who have strongly reacted include Yaduveer Krishnadatta Chamaraja Wadiyar of the royal family, Alyia Phelps-Gardiner-Krumbiegel, great grand-daughter of Gustav Herman Krumbiegel, the German botanist-architect known for his invaluable work in Lalbagh and other gardens in Bengaluru and Mysuru, Raja Chandra of the Mysore Royal family, Dr. N.S. Rangaraju, former Professor of Ancient History and Archaeology, University of Mysore, and civil society groups including Mysore Grahakara Parishat (MGP) and ‘Heritage Beku’ of Bengaluru.

Strongly disapproving the MCC decision, Yaduveer, the brand Ambassador for the civic body’s ‘Swachh Bharat Abhiyan,’ has said both in Kannada and English in his Facebook page that the MCC’s resolution “is an extremely disturbing stance.” It went against the very ideals that the MCC should protect our inherited heritage. The consensus opinion of various concerned bodies was that these heritage structures can be restored and can be of utility.”

Drawing attention to the MCC to its responsibility to protect the city’s inherited heritage, he said, “We now have a lack of trust in the MCC’s capability to ensure protection and safeguarding of our heritage in Mysore.” He cautioned that the Mysuru’s ‘Heritage City’ tag itself would be in jeopardy if we went about demolishing every structure and taking the easy way out. These structures were in the current condition only because of the negligence and disregard shown to them by the authorities — a view shared by many others.

He proposed to the Government to handover the restoration to a reputable organisation that has the capability to restore the structures, and ensure our built heritage remained standing for future generations to enjoy. Many of his followers have supported Yaduveer.

A move not justified

In an interview published in a local Kannada daily, former MCC Commissioner Raikar said only a portion of the Lansdowne Building had collapsed and rest of the portion was intact. If timely precaution had been taken, this would not have happened. But due to certain reasons this was not possible. Stating that the MCC’s decision to demolish it and rebuild a similar one was not justified, the former MCC Commissioner said the structure was of great value to the city in the heart of the city’s life. It would be a misadventure to demolish any heritage building and would not vouch for the prestige of the MCC.  Both the heritage buildings which mark the unforgettable cultural and historic traditions of Mysuru should be restored in order to retain the heritage merit of Mysuru.

Reacting to the MCC’s resolution, Alyia Phelps Gardiner Krumbiegel said Mysore, like in India, had a rich heritage that speaks of our glorious past. There is no doubt that preservation, conservation and restoration of the heritage buildings was of utmost importance. They should be conserved and preserved as they are part of our ancestral property. The Devaraja Market and the Lansdowne Building absolutely needed restoration, she said, adding she would write to the Chief Minister against the MCC’s decision.

Sharply reacting to the proposed demolition, Raja Chandra described the move as “shocking.” He drew the attention to the statement of Prof. Rangaraju who has described the MCC Council’s decision as shocking and illogical, and his warning that Mysuru may lose the ‘Heritage City’ tag.

A respondent to his post, Archana Urs has commented even if the MCC wants to rebuild it, it has to take a blue print of the original building and details inch-by-inch to do justice to its old architecture and style. Then only one could agree its re-construction, she said, citing the example of Venugopala Swamy Temple that has been restored in its original shape, size and impressive architecture by Khoday Foundation at Hosa Kannambadi village near Krishna Raja Sagar Dam.

Posting links to the SOM reports, Raja Chandra said a campaign to right to recall and referendum was needed.

Many in Raja Chandra’s group have posted comments supporting his statement. Alyia reacted saying it was crazy to tear a building down. “In the pursuit of sustainable development, communities have much to gain from adapting and reusing buildings. Bypassing the wasteful process of demolition and reconstruction alone makes adaptive reuse attractive. Environmental benefits, combined with energy savings and the social advantage of re-purposing a place with valued heritage, make adaptive reuse an essential component of sustainable development. Historic buildings provide a glimpse of our past while lending character and serving a new practical purpose in our modern communities,” she said.

Prof. Rangaraju, who is also a member of the Heritage Improvement and Restoration Committee (HIRC), said the Task Force Committee, which had recommended demolition and rebuilding on the reason that both the buildings were weak, had no heritage expert in its Committee as all the experts were civil engineers. He has pointed out that no effort was made to find out the reason for the collapse of the northern entrance of the Devaraja Market. At least now an enquiry must be conducted.

“Devaraja Market and Lansdowne Buildings can be restored without being demolished and there are experts who can conserve these structures,” the Professor said, adding all the 14 Palaces and heritage structures in Mysuru should be declared as heritage buildings. The Government should come forward to preserve the heritage structures as Mysuru City is called Heritage City, he said.

Netizens have shared his statement published in SOM, wherein a similar demand has also been made by one more expert Prof. V. Prof. H.D. Nagesh, Principal, Wadiyar Centre for Architecture, saying that in Turkey the nearly 550-year-old Grand Bazaar had been preserved and attracted number of people.

The MGP, which has been opposing the demolition of the two leading structures, is among the civil society groups which have raised their voice against the razing of the two commercial structures.

MGP has reiterated its demand for of a new Committee comprising experts in the area of civil engineering and heritage conservation to go into the issue and give its recommendations within a short time. It “an approach based on technical factors rather than ‘political considerations’ should guide us in shaping the future of course of action.” Experts who had examined the structures had fully supported of the two heritage properties, it added.

“Heritage Beku”, a citizens’ group of Bengaluru, has addressed a letter to the Chief Secretary, Karnataka Government, expressing shock over the MCC’s decision and asking the Government to “pay heed to our citizen group by giving us a clear response, a hearing and  a clear outline of why this is being done and what alternatives are being proposed to address the conservation of this beloved central part of Mysore.”

The letter expressed its “unequivocal protest against this short term and retrograde move impacting our beloved state heritage” and said “Heritage Beku” looked forward to a prompt response and action.

Priya Chetty-Rajagopal of the “Heritage Beku” said the approach should be of restoration first and not demolish and rebuild as per heritage design. Bengaluru’s Heritage Architect Yashaswini Sharma, sharing “Heritage Beku” letter on the social media platform, said the two building can be restored. The Devaraja Market wall collapse didn’t happen on its own, as reported in this daily.

A few of them have alleged vested interests behind the move. A few have suggested public petition and agitation.  Another has remarked “they keep blabbing about our history and then knock down everything historical!”

There are one or two differing opinions too. One member has tweeted that the entire area should be converted into a big park with lots of trees, but, in the immediate next post, the same has been opposed by another member retorting Devaraja Market is an ecosystem supporting lives of thousands of people, everything would get ruined. Perhaps the best one is a tweet by a netizen exhibiting his excellent knowledge of heritage by commenting, a new structure after fifty years would become heritage !